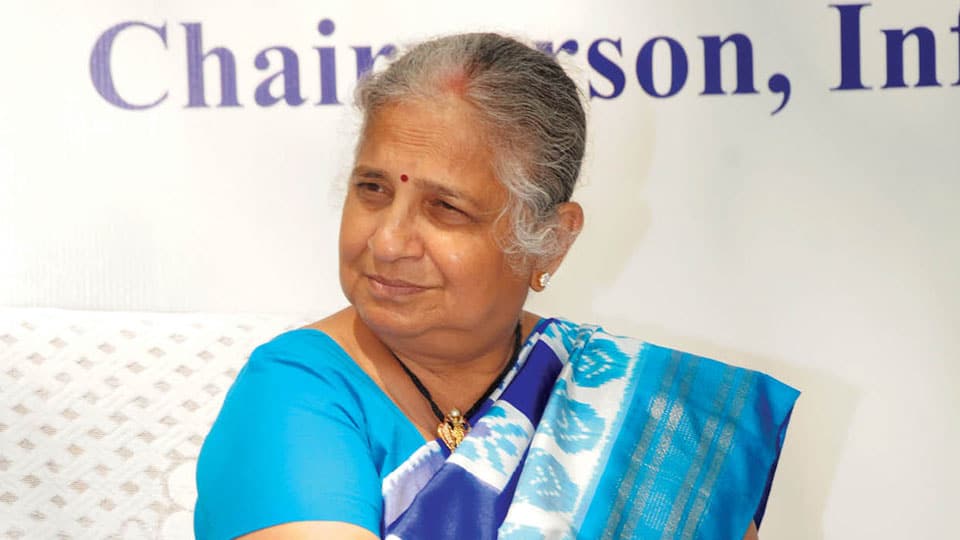 “I used to read a lot in the library from morning till evening. After fourth standard, I had left school telling that I know Kannada and I do not need to study anymore. However, at 16 when I did my PUC was the time when I was fascinated by science.  That was the time when I decided to do engineering. Like any other teenager when you are told not to do something, you end up doing it. After finishing my engineering, I had become independent. I like to do anything all alone without anyone’s help,” said Sudha Murty, an engineer-teacher-philanthropist-writer and Chairperson of Infosys Foundation.

She was in conversation with writer Vasudendra on Oct.12 at ‘A Morning with Sudha Murty,’ organised by Mysore Literary Forum Charitable Trust and Book Clubs 2015 at Wind Chimes in Nazarbad.

Vasudendra had asked her about what she felt about the goals in her life as it would always keep changing. She said, “I met Narayana Murthy. My goals were very clear. I should marry a man who reads a lot. Then only I can have a dialogue with him. I remember there were many books a friend of his used to bring and in it would be written, ‘Narayana Murthy Istanbul,’ ‘Narayana Murthy Peshawar,’ ‘Narayana Murthy  Paris.’ I asked my friend Prasanna, “Is Narayana Murthy an international bus conductor?”

“Prasanna replied, no, no, he hitch-hiked from Paris to Mysore on the backpack. So in every place he bought a book. That was the great attraction towards Narayana Murthy I had. It was not his money. No, no, he did not have any money. He was dependent on me later,” she said.

Referring to Devadasis’ lives on which she has even written a book titled ‘3,000 Stitches,’ she said, “After transforming the lives of 3,000 Devadasis with whom I had worked for nearly 17 to 18 years, they decided to felicitate me and even told me that they would pay for my AC Volvo bus ticket. They did not know that I could even fly in a helicopter. That is their level of innocence. As I went to the function, they were all there and asked me to speak. I always speak extempore. But that day I was speechless, no words came out of my mouth. I was actually dumbstruck. Instead, I just broke down on the stage thinking of my father, Infosys and my family.”

Vasudendra then posed her a question on how people always talk about her simplicity and asked how easy or difficult it was to be simple. Sudha Murty said, “I do not want to impress anyone. I have no expectations. I value friendship but there should not be any negative feeling and if that comes in between then it is not true friendship at all.” 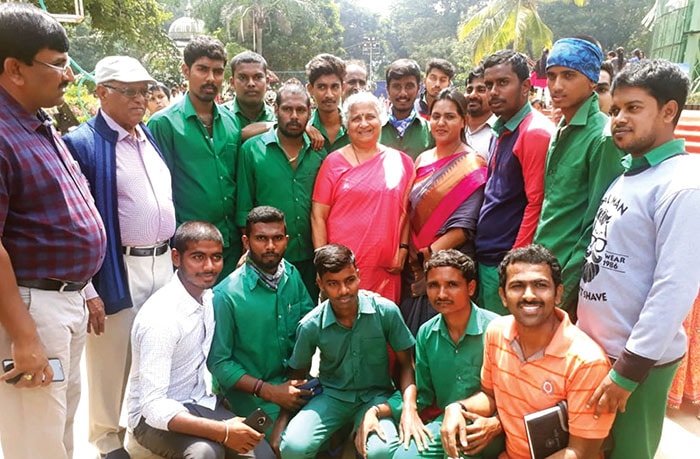 Sudha Murty, who was a surprise guest at Dasara Flower Show recently,
poses for a photograph with the staff of Kuppanna Park.

She also talked about her three great regrets. “I do not know how to cook well, I have not learnt yoga and I cannot swim. After all, we do not have Cauvery River in Hubballi. Hence, I took a decision, whatever I have I will enjoy,” she said.

Talking about the importance of reading habits, she said, “When my son Rohan Murthy was nine years old, I asked him to read and he claimed that he had read two books in one week. I was really impressed. When I asked what he had read, he showed me the alphabet books. I did not admonish him. I just told him, you are not cheating me but yourself by doing this and kept quiet. It was only when he was 21 that my silence showed that it had worked. He told me about the importance of Sanskrit and now he has even set up Murthy Classical Library.”

She added, “I do not lend even a single book to Narayana Murthy. I always tell him to buy his own books. In our house we have four libraries.”

She concluded by saying, “Parents should always be the role models for children. Not Narayana Murthy or Sudha Murty.”

It was an apt way to end because in the beginning when the conversation began, Vasudendra, pointing at the two rain trees on either side of the dais said, “The setting is so good and these two trees on either side to me represent Narayana Murthy and Sudha Murty with deep roots.”

After the conversation ended, the bibliophiles were ready with works of Sudha Murty for her autograph. She signed each and every book patiently with an affectionate word for everyone. Nearly 260 of her titles were sold on the occasion. However, many had to return disappointed as she had to leave to attend other engagements.

“Life is an exam where the syllabus is unknown and question papers are not set. Nor are there model answer papers.” – Sudha Murty, Wise & Otherwise

“With my experience in life, I want to tell you that having good relationships, compassion and peace of mind is much more important than achievements, awards, degrees or money.” – Sudha Murty, The Day I Stopped Drinking Milk: Life Lessons from Here and There