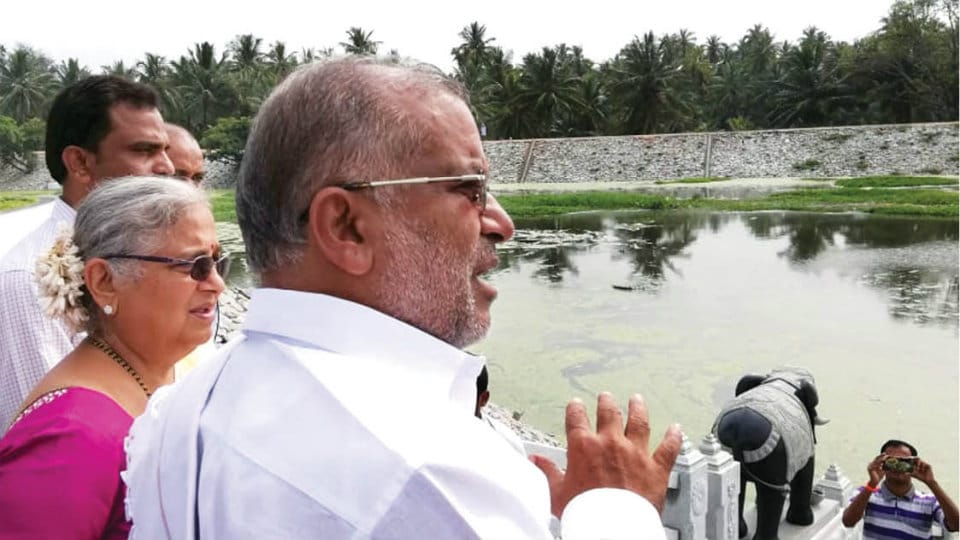 Mysuru:  The city will soon have another tourist destination — Hebbal Lake. The 40-acre mammoth water body, covered with a green space, will add to the list of the tourist attractions as the State Government and Infosys have joined hands to develop the Lake.  While the Foundation has already spent crores of rupees in Lake rejuvenation, the Government will take steps to stop the flow of sewage water into the Lake and develop it as a must-visit tourist spot.

District Minister G.T. Devegowda, Infosys Foundation Chairperson Dr. Sudha Murty, Dy. Commissioner Abhiram G. Sankar, MCC Commissioner K.H. Jagadeesha and other officials inspected Hebbal Lake this morning. Hebbal Lake is near Infosys Mysuru campus and the Lake which was once a thriving water body got polluted over the years and is now surrounded by housing blocks and industries.

Two years back, the District Administration and the MCC had signed a Memorandum of Understanding (MoU) with Infosys Foundation for conservation and restoration of this Lake. As per the MoU, Infosys promised to develop the Lake by funding a whopping Rs.30 crore, besides maintain the Lake for five years and later hand over to the MCC.

Infosys was also ready to spend a major chunk of funds to set up a Sewage Treatment Plant (STP), which will come up on a three-acre plot allotted to the Foundation next to the Lake. It had also promised to complete the work within 15 months of signing MoU after removing silt, create walking path, plant saplings, fencing and beautifying the surroundings.

Infosys had also agreed to adopt membrane technology from Germany for 8 MLD (Million Litres per Day) capacity STP and to flow back the recycled water into the Lake.

READ ALSO  Karnataka Housing Board scam back to haunt G.T. Devegowda ahead of Assembly polls

As per the MoU, Infosys Foundation had developed most of the Lake beautification works as of now.  During today’s visit, Sudha Murty expressed displeasure over industries, residences and dhabas around the Lake discharging industrial effluents, waste and other leftovers into the Lake which has been dying a slow death due to pollution.

She wanted the District Administration to take immediate steps to arrest the discharge of sewage water besides clear official hurdles to establish STP plant as per the agreement. She also expressed her unhappiness for deliberate closure of rain water inlets into the Lake which is crucial for its survival.

Later speaking to reporters on the sidelines of the inauguration of Dasara Darshan tour programme at Kote Anjaneyaswamy temple, G.T. Devegowda said that he had already directed the District Administration to take action and stop the flow of sewage water into the Lake and act against industries and dhabawallas for polluting the water body. Instructions have also been given to officials to get the hurdles cleared for STP.

He said that Sudha Murty had sought the government to develop this Lake as a tourist spot. “It will be developed as per her wishes. A discussion will be held with CM H.D. Kumaraswamy in this regard,” he added.

2 COMMENTS ON THIS POST To “Sudha Murty’s Aqua Touch”