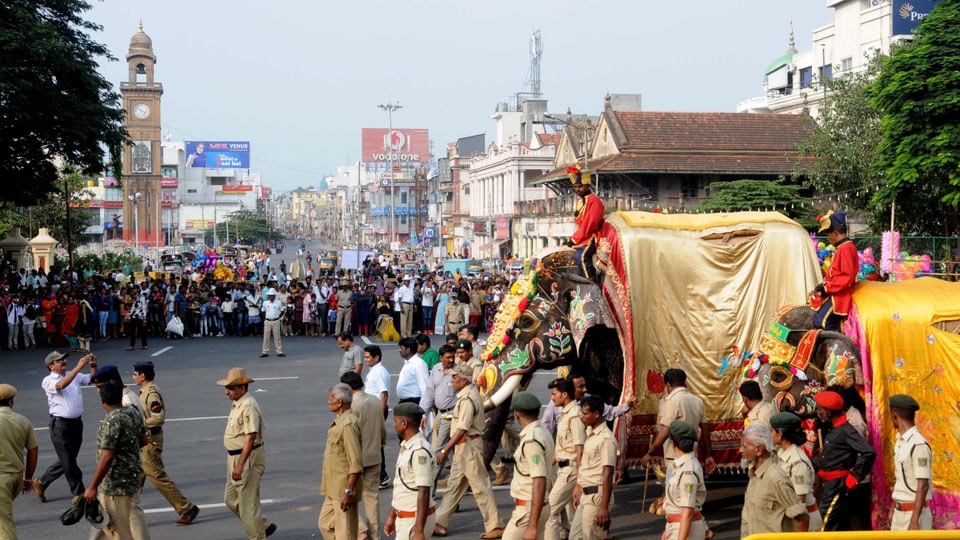 Mysuru: It was a mini Dasara procession with the title Janapada Jathrotsava held yesterday afternoon, complete with caparisoned elephants and cultural troupes.

The only thing missing was the 750-kg Golden Howdah, carried by the majestic and the mighty Arjuna. People cheered by the side of the roads on the Jumboo Savari route as elephants and cultural troupes marched amidst blaring music and beats of the drums. For the first time in the history of Mysuru Dasara, the District Administration came up with a plan to organise Janapada Jatrotsava similar to Jamboo Savari, to provide an opportunity for participants who were deprived of an opportunity to perform during Jumboo Savari. However, the full-fledged Jumboo Savari procession, with elephant Arjuna carrying the Golden Howdah, will be held on Oct. 19. 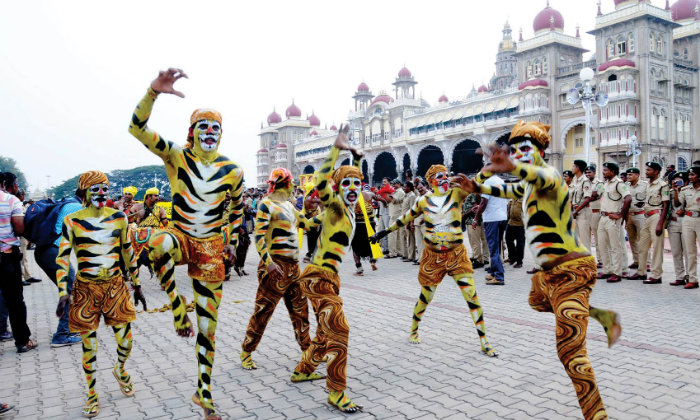 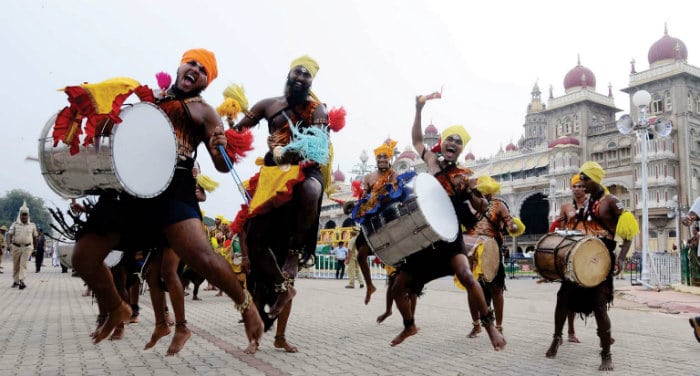 The procession, no doubt was a cultural treat with artistes and folk troupes from across the State performing to entertain the audience with their skills. Roadside stages were set up all over the route such as K.R. Circle, near RMC and Highway Circle like the Vijayadashami Day, thus turning the event into a carnival atmosphere. 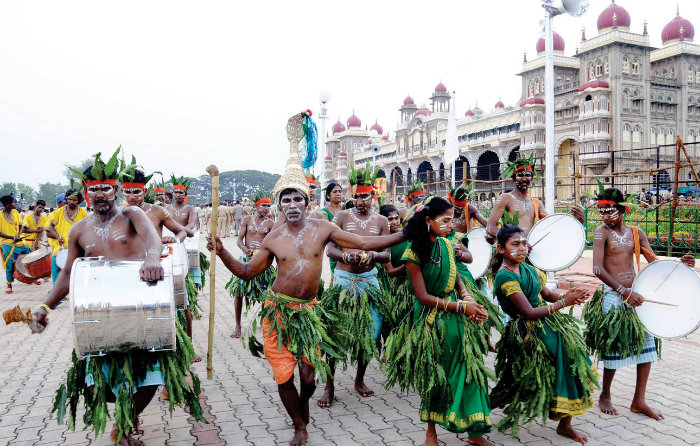 The Janapada Jatrotsava was inaugurated by Deputy Chief Minister Dr.G. Parameshwara, accompanied by his wife Kannika Parameshwara. He performed puja to the Nandi Dhwaja in the presence of District Minister G.T. Devegowda, Tourism Minister S.R. Mahesh, MLA B. Harshavardhan, Deputy Commissioner Abhiram G. Sankar and City Police Commissioner Dr. A Subramanyeshwara Rao.  As soon as the puja to the Nandi Dhwaja was performed, cultural troupes and elephant team led by Howdah Elephant Arjuna, accompanied by other elephants Balarama, Abhimanyu, Dhananjaya, Prashantha, Varalakshmi, Cauvery, Chaitra, Vijaya and Drona marched ahead. As soon as Arjuna entered the procession route, people cheered with the top of their voice. 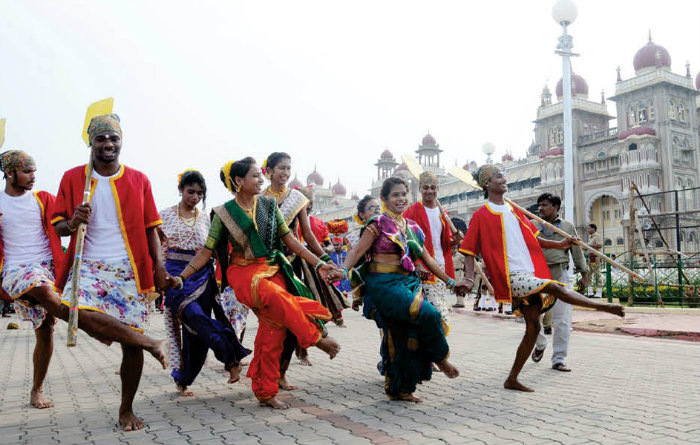 Koli Nruthya performed by a group of fishermen and women from Maharashtra.

Before the procession began, ceremonial cannon firing took place where 21 rounds were fired and 1.5 kgs of gunpowder was used for each round. As many as 75 teams, including folk troupes and colleges which performed in Yuva Sambhrama, Scouts and Guides, Police Band, Mounted Police Force, Forest Department and the Fire and Emergency Services Department participated in the procession. The folk artistes performed Naadaswara, Kombukahale, Dollu Kunitha, Veeragase, Koli Nruthya, Nasik Dolu, Keelu Kudure, Kaththi Varase, Garudi Gombe, Gorakana Nruthya, Goravara Kunitha, Kamsaale, Maari Kunitha, Huli Vesha, Pooja Kunita and other art forms. Police Band and March Past were other attractions in the procession. 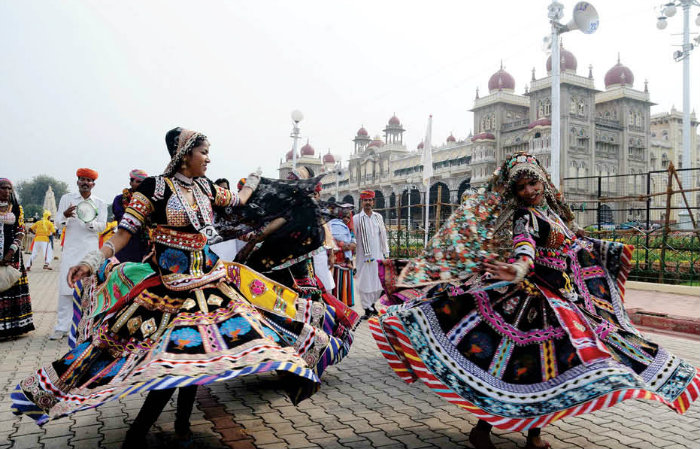 Performers from Rajasthan display their talent.

Thousands of people witnessed the procession along the Raja Marga till Bannimantap. Along with cultural troupes, several college teams which had performed well at Yuva Sambhrama too participated in the procession. The Koli Nruthya performed by a group of fishermen from Maharashtra and the Gorakana Nruthya by Soliga community were popular among the performers. 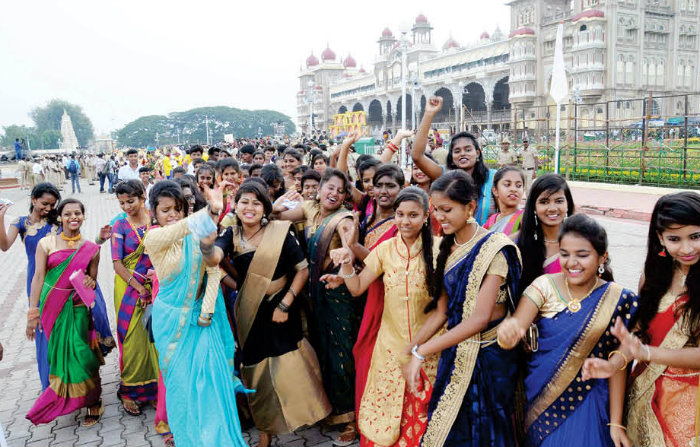 A group of young women have their moment of fun and frolic at Mysore Palace premises.