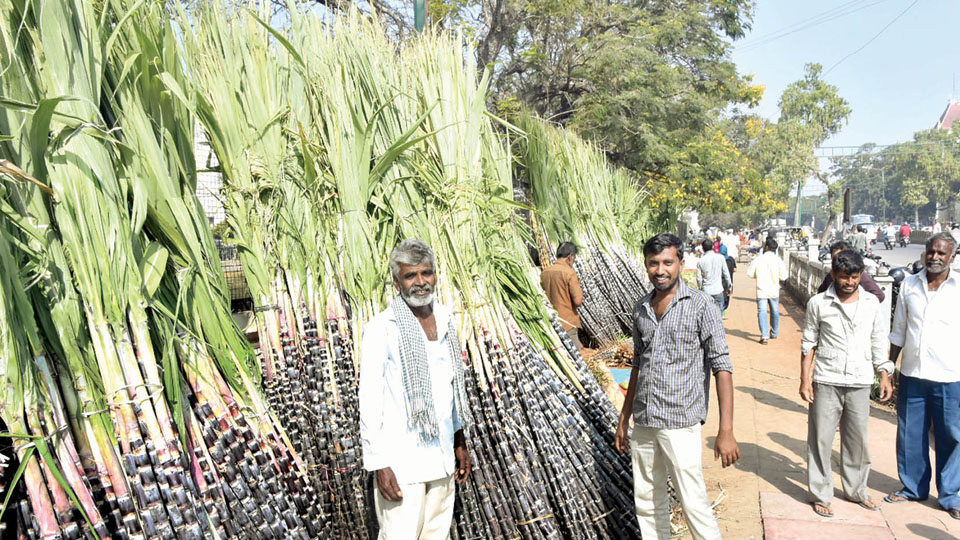 Mysuru/Mysore: Makara Sankranti is celebrated all across Karnataka State in the month of January to mark the first day when the sun is transiting into the Capricorn, also known as Makara, tenth sign of the Zodiac. Sankranti festival also marks the end of the month when the winter solstice, which is referred to as the  darkest night of the year, happens. As per Hindu tradition, Makara Sankranti also marks the beginning of Uttarayana, a six-month auspicious period.

As the city is all geared up to kickstart the festive vibes in New Year, residents are enthusiastically shopping for flowers, fruits, jaggery, sesame and other ingredients for making Ellu-Bella. In particular, sugarcane sellers who have a busy day on the eve of Sankranti have started doing roaring business on major footpaths near J.K. Grounds, Agrahara Circle, Surya Bakery Circle in Hebbal, Matrumandali Circle in VV Mohalla, Vivekananda Circle in Srirampura and other  busy places in city.

A sugarcane stalk of 8 feet length is being sold at Rs. 60 in most of the places. While sale of sugarcane has started yesterday evening itself, the roadside sellers are expecting that the business will pick up by tomorrow evening.

Farmers call this as Kari Kabbu or black sugarcane, which is essentially grown by farmers to be sold on the occasion of Sankranti and is different from sugarcane cultivated for production of sugar and jaggery. This Kari Kabbu, which was earlier exclusively grown only in Tamil Nadu during festive season, is now being cultivated in T. Narsipur, Holenarsipura, Pandavapura and other sugar belts of the State.

As per norms, Kabbu (sugarcane) as well as Sakkare Acchu (sugar mould) along with Ellu-Bella, which is a popular sweet trail mix of five ingredients, is distributed among friends and relatives during Sankranti.