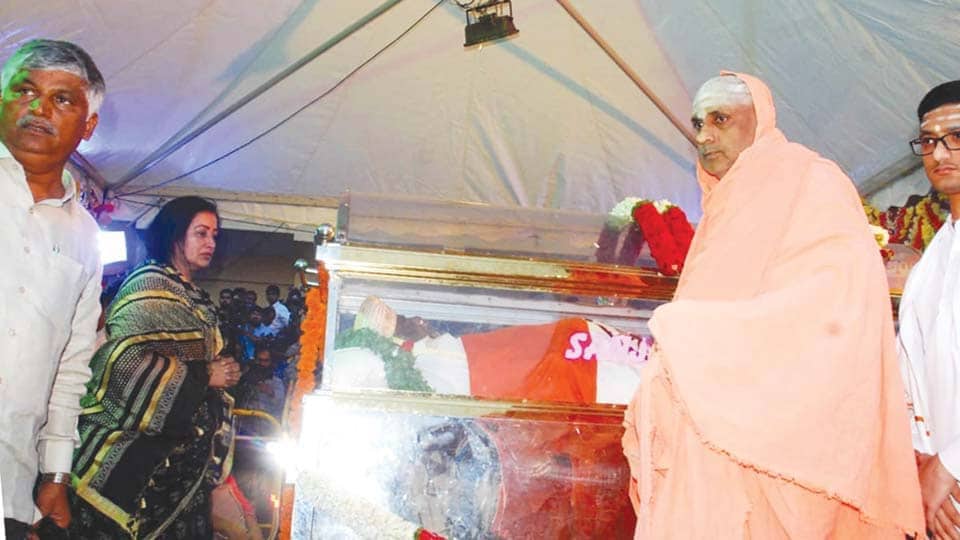 Mysuru: Suttur Mutt Seer Sri Shivarathri Deshikendra Swamiji has condoled the death of actor and former Minister Ambarish. In a condolence message, the Seer recalled Ambarish’s college days in Mysuru and his entry to cinema world.

Pointing out that Ambarish came into prominence for his role in Puttanna Kanagal’s film ‘Nagarahavu’, the Swamiji said that Ambarish shot into fame in the cinema world by playing various roles in a number of films and earned the title ‘Mandyada Gandu.’

Noting that talent was in the blood of Ambarish, who was the grandson of Renowned Musician of yesteryears Pitil Chowdiah, the Seer recalled Ambarish’s outstanding roles in films such as ‘Antha’, ‘Ranganayaki’ and ‘Paduvarahalli Pandavaru.’

Stating that Ambarish was more of a human being than an actor, Sri Deshikendra Swamiji said that as a tall actor, Ambarish treated everyone with respect.

Observing that Ambarish also made a big mark in politics as an MP, MLA and Minister, the Seer recounted that Ambarish quit the Manmohan Singh Ministry at the Centre, in support of farmers, when the Cauvery dispute between Karnataka and Tamil Nadu had hotted up.

Reiterating that Ambarish was a friendly and generous person, who had friends in all the political parties, the Seer recalled Ambarish’s contribution as head of Karnataka Film Chamber.

Noting that the State had lost a tall actor and a highly reputed human being, the Seer said that he has prayed to the Almighty to give the strength to Ambarish’s family members and his innumerable fans to bear the loss.

Sri Deshikendra Swamiji has paid rich tributes to former Union Minister and veteran Congress leader C.K. Jaffer Sharief, who passed away at a hospital in Bengaluru yesterday. In a condolence message, the Seer, recalling Sharief’s contribution to the State as Union Railway Minister, said that Sharief grew up in politics under the likes of tall leaders such as Indira Gandhi, S. Nijalingappa and P.V. Narasimha Rao.

Pointing out that as Union Railway Minister in the nineties, Sharief granted a number of projects for Karnataka and was also instrumental for expediting Railway Gauge Conversion works across the country.

Noting that Sharief was a good orator and a popular politician who was respected by all sections of the society,  the Seer said that with Sharief’s death, the State lost a good Parliamentarian.

The Seer said that he has prayed to the Almighty to give strength to Sharief’s family members and his followers to  bear the loss.