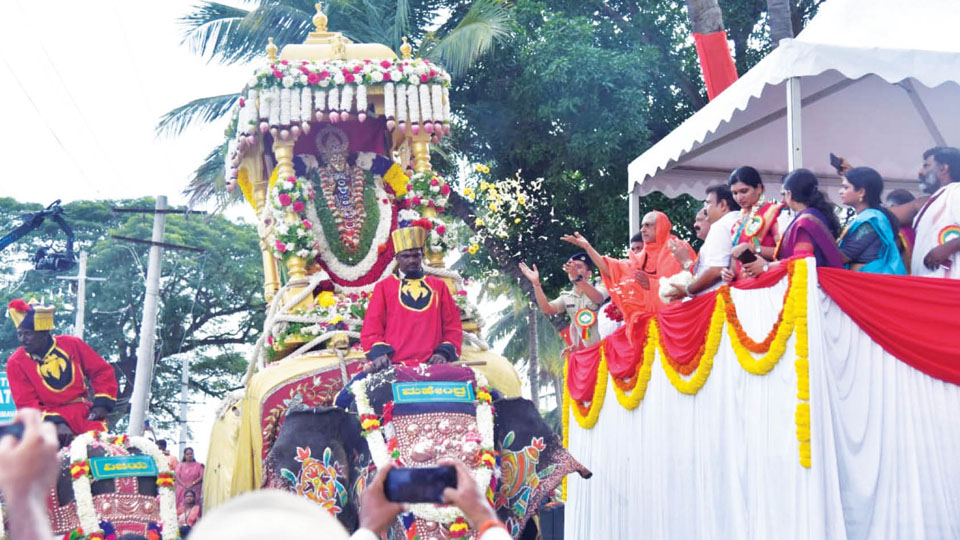 Srirangapatna: The five-day Srirangapatna Dasara began on a grand yet traditional note in the historic town of Mandya district yesterday afternoon.

Suttur Mutt Seer Sri Shivarathri Deshikendra Swamiji inaugurated the festivities in the auspicious time of 4 pm at Bannimantap near Kirangur Circle  by showering flower petals on the idol of Goddess Chamundeshwari placed inside a wooden replica of ‘Ambari’ that was carried by tusker Mahendra, one of the Mysuru Dasara elephants.

Before the launch of the festivities,  Vedic Scholar Dr. Bhanuprakash Sharma performed traditional pujas and associated rituals at Bannimantap.

The ‘Ambari’ procession, which commenced from Bannimantap, passed through Baburayanakoppalu on Mysuru-Bengaluru road and the main thoroughfares of Srirangapatna  town before culminating at Sriranga Vedike built near the famed Sri Ranganathaswamy temple.

The procession was accompanied by a host of folk and cultural troupes and thousands of people had gathered along the entire route to watch the Ambari elephant Mahendra march with majesty carrying the grandly decorated idol of Goddess Chamundeshwari, with kumki elephants Kaveri and Vijaya. More than 10 tableaux of Government Departments,  Goa carnival presentation, Mirror Man, Chinese Lion, Kerala folk arts etc., too were part of the procession. The Police department’s tableau focusing on the importance of wearing helmets while riding impressed the crowd. The Taluk Administration had made seating arrangements for the public along stretches of  Mysuru-Bengaluru road passing through the town, in front of Bus stand, at TMC Office Circle and in front of  Taluk Office.

2 COMMENTS ON THIS POST To “Suttur Seer inaugurates Srirangapatna Dasara”