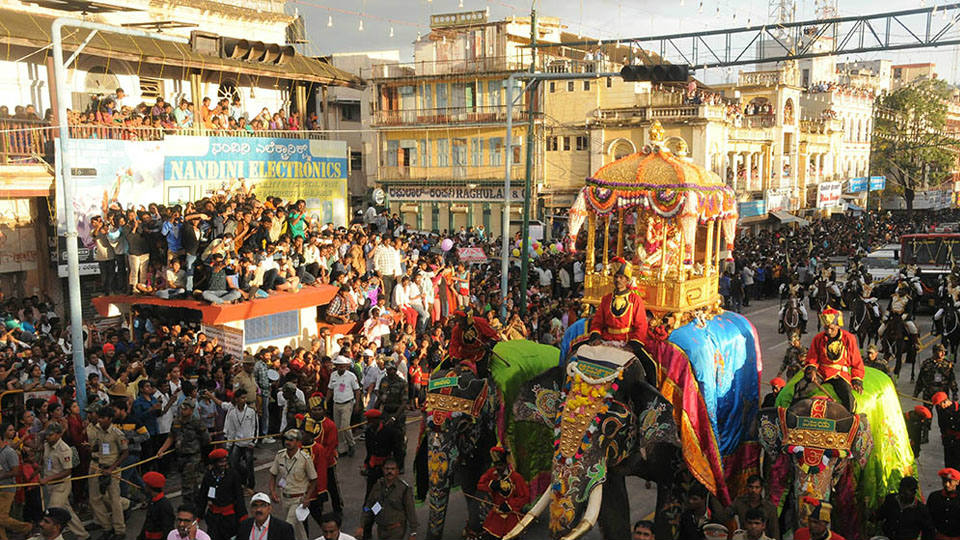 But do people really care for such a ban?

Mysore/Mysuru: As every year, the Mysuru City Corporation (MCC) has issued a directive now to people not to climb the heritage structures on Sayyaji Rao Road on Oct.5, the day of the Dasara procession.

As some buildings have turned weak and cannot hold the weight of a large congregation of people, the MCC has requested the jurisdictional Police to ensure that the order is complied with in the interests of the public.

This order applies to both Government and private buildings. It states that at no point, people will be allowed to climb structures, especially during procession. The order has been issued under Karnataka Municipality Act 1976 Sections 322 (1) and 3 which deal with precautions to be taken with regard to dangerous buildings.

Every year, the MCC Commissioner issues similar orders preventing people from climbing dilapidated structures along the Jumboo Savari route. The order, however, was not issued in 2020 and 2021 as Vijayadashami procession was restricted to the Mysore Palace premises.

Despite the order, hundreds of people are seen climbing heritage structures to watch the grand spectacle. Police try to convince people to get down from the buildings and this has time and again proved to be a futile exercise. Besides, people also climb onto trees to get a glimpse of the Jumboo Savari. They don’t even spare the dilapidated and partially collapsed Devaraja Market Building.

The best way forward would be to temporarily seal the entry points of such buildings and request the owners to prohibit crowds from climbing the rooftops for watching the procession, say some shop owners.