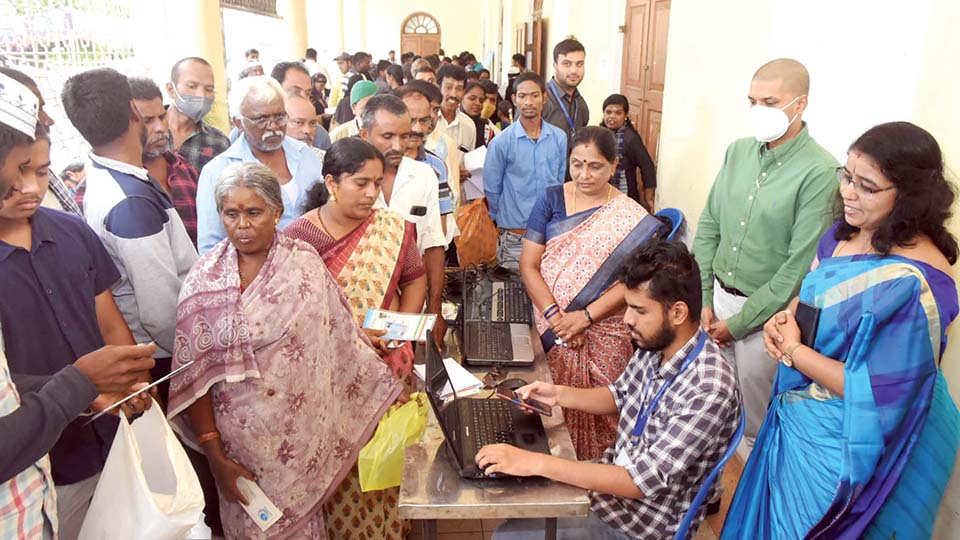 Mysuru:The Town Hall in the heart of the city was a beehive of activity this morning as hundreds of street vendors and other beneficiaries of Pradhan Mantri Street Vendor’s AtmaNirbhar Nidhi (PM SVANidhi) scheme, thronged the venue to take part in ‘SVANidhi Samriddhi Mela,’ a day-long city-level camp that was organised by Mysuru City Corporation (MCC) in association with Deendayal Antyodaya Yojana-National Urban Livelihoods Mission (DAY-NULM) section of District Development Co-ordination and Monitoring Committee (DISHA).

Mayor (in-Charge) Sunanda Palanetra inaugurated the event by lighting the lamp. Speaking on the occasion, Sunanda Palanetra explained the objective of the camp and said that any scheme introduced by the Governments can become successful only if the beneficiaries make good use of the benefits and facilities covered under it.

Maintaining that the Mela will help in profiling the street vendors and also document details of their family members, she appealed the beneficiaries to turn up at the Mela in large numbers in order to know about the benefits under various schemes covered that chiefly include Pradhan Mantri Suraksha Bima Yojana (PMSBY), PM Jeevan Jyoti Bima Yojana (PMJJBY), PM Shram Yogi Maan-dhan (PM-SYM), One Nation One Ration Card, PM Jan-Dhan Yojana (PMJDY), registration under building and other construction workers category, PM Matru Vandana Yojana (PMMVY) and Janani Suraksha Yojana (JSY).

Noting that the PM SVANidhi was launched by the Union Ministry of Housing and Urban Affairs on June 1, 2020 for providing affordable working capital loan (Rs. 10,000) to street vendors to resume their livelihoods that have been adversely affected following COVID-induced lockdown, Mayor (in-Charge) Sunanda Palanetra contended that the scheme largely helps the street vendors at getting back at their feet financially.

Principal District and Sessions Court Judge M.L. Raghunath, who was a guest of honour on the occasion, said that prior to the enactment of Street Vendors (Protection of Livelihood and Regulation of Street Vending) Act, 2014, street vending was considered as unauthorised but with the enactment of the Act, street vending has got legal sanction and all the eligible beneficiaries can avail loans and other benefits and facilities under various schemes meant for them. Pointing out that the District Legal Services Authority (DLSA) helps in addressing any problems faced by the beneficiaries in getting their entitled benefits, he asked them to seek the DLSA’s guidance and help for free whenever they need it.

MCC Additional Commissioner M.J. Roopa, in her address, said that the profiling of all registered street vendors of the city is underway.

Noting that documentation of all family members need to be done in order to ensure complete implementation of the Centrally funded  PM SVANidhi schemes, she said that the MCC received over 10,000 applications for Rs. 10,000 loan of one-year tenure. The profiling under SVANidhi scheme, in the long run, aims at establishing a credit score for the vendors and as well as creating a digital record of their socio-economic status so that they can avail Central Government schemes later, she added. Continuing, Roopa said that street vendors of the city had submitted 16,506 application to Banks seeking loans for resuming their livelihood that was shattered by the outbreak of the COVID pandemic. Out of this, 10,059 applications were found eligible and of them, 9,335 beneficiaries got a collective loan of Rs.10.13 crore, with one getting Rs. 10,000.

Pointing out that so far, profiling of 4,281 street vendors and their family members has been completed, she said that details about their socio-economic status is being collected and collated with help from Town Vending Committee. The beneficiaries can use this data filled profile for availing benefits under Government schemes for which they are eligible, she added.