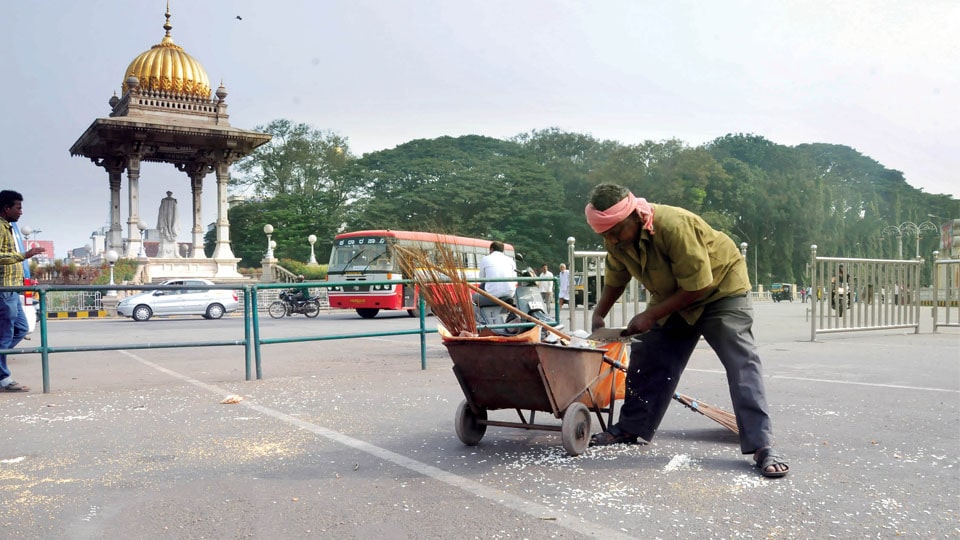 Mysore/Mysuru: If Indore, the largest city in Madhya Pradesh is preparing to do its best to be ranked as the Cleanest City in the country for the fifth year in a row in the upcoming “Swachh Survekshan”, Mysuru, the Cultural Capital of Karnataka too is vying to regain the same ranking that it had gained in the First and Second Edition of the Survey in 2015 and 2016, and subsequently lost.

“Swachh Survekshan” (cleanliness survey) is being carried out by the Ministry of Housing and Urban Affairs, the assessment for which has begun from Mar. 1 and will continue till Mar. 31. Survekshan officials and independent assessors are likely to arrive in Mysuru any time and the Mysuru City Corporation (MCC) is gearing up for the survey.

Speaking to Star of Mysore, MCC Health Officer Dr. D.G. Nagaraju said that the focus of the Corporation is to maintain the Open Defecation Free (ODF) status, reduce landfills, waste management at source, and segregation of dry waste, wet waste, plastic waste and e-waste, recycling, reusing and organised waste disposal. The MCC is recycling 30 percent of water and utilising it for secondary purposes such as gardening and fountain maintenance.

He said that till last year, the survey was conducted in three categories — Citizen’s Feedback, Direct Observation, Service-Level Progress and Certification. “Citizen’s Feedback is crucial as it indicates active, passive or non-participation by the citizens. The total Survekshan is of 6,000 marks and we need to score well in Citizen’s Feedback as all the previous years, we have been lagging behind there,” Dr. Nagaraju said. Apart from categorising cities and ranking them on the basis of their population, cities will also be evaluated on the basis of various indicators such as percentage of waste segregation, quantum of waste processed, recycling of both wet and dry waste, processing of construction and demolition debris.

“Mysuru is not far behind Indore in terms of cleanliness and direct evaluation by third parties. We are losing out only on the citizen feedback front. We are progressing well in all categories, except Citizens’ Feedback and this has made us to miss out on rankings,” he added.

People can give their feedback using the QR Code of Swachh Survekshan-2021 or visit https://swachhsurvekshana2021.org or call toll-free number 1969 to submit their views. People can download Swachhata app, SS2021 Vote for your city app or MyGov app to submit the feedback.