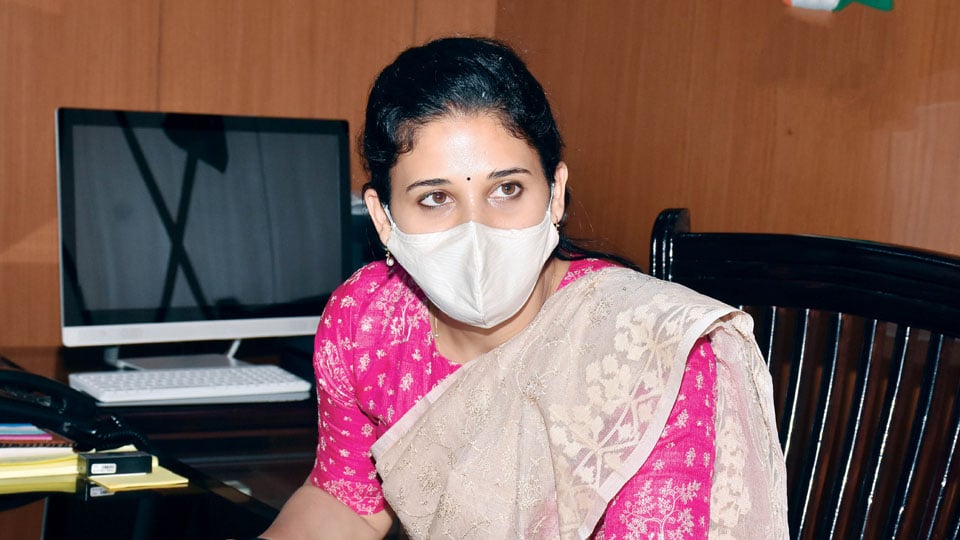 Mysore/Mysuru: IAS Officer Rohini Sindhuri, who is now the Commissioner for Hindu Religious and Charitable Endowments, Bengaluru, has defended the construction of indoor swimming pool at the Mysuru DC’s Bungalow premises and said that construction of the pool was a pilot project under Nirmithi Kendra out of the Kendra’s own funds.

“Nirmithi Kendras build projects with the use of locally available materials by adopting low-cost, effective technology. They execute pilot projects to prove the efficacy of the technology before implementing it as a general programme. As per this mandate, swimming pools were planned at the district and taluk levels about five years ago and were assigned to Nirmithi Kendra. Approvals have been taken from Nirmithi Kendra’s Executive Committee,” she told Star of Mysore.

The idea was to prove the efficiency of locally available resources by adopting cost-effective technology and then extend to all taluks. The same has been done in conformity with the prescribed procedure by Nirmithi Kendra with due administrative approval in the annual general body meeting, she said.

“The allegations made in this regard have no basis and this is the reason why the Regional Commissioner’s (RC) investigative report has cited only technical issues and with the RC’s report an attempt is being made to project that the pool construction has no approval. The fact that the pool has been approved by Nirmithi Kendra’s Executive Committee has been ignored,” she clarified.

The construction of the pool has not been taken up during COVID pandemic and the works were taken up on 30.12.2020 as mentioned in the RC’s report, she said. “There was no COVID and second wave then. The question of misusing COVID funds does not arise here and the in-detail probe report mentions only technical aspects of the pool construction,” she added.

“I welcome the enthusiasm shown to investigate the pool construction. The same enthusiasm and scale must be shown to unearth the land dealings and encroachments made by certain influential politicians in Mysuru. These dealings must also be probed in a comprehensive and a detailed manner,” Rohini Sindhuri has said.

Expressing displeasure over the way land encroachments are being investigated, she said, “When I was the Mysuru DC, I had clearly mentioned in my reports about several blatant encroachments and land irregularities in Mysuru by certain set of individuals and had ordered investigations. But only one aspect of the encroachment has been taken up and the investigation was limited to that particular land. Let a detailed and comprehensive investigation be taken up.”