Home » News » Tale of missing grills and passing the buck 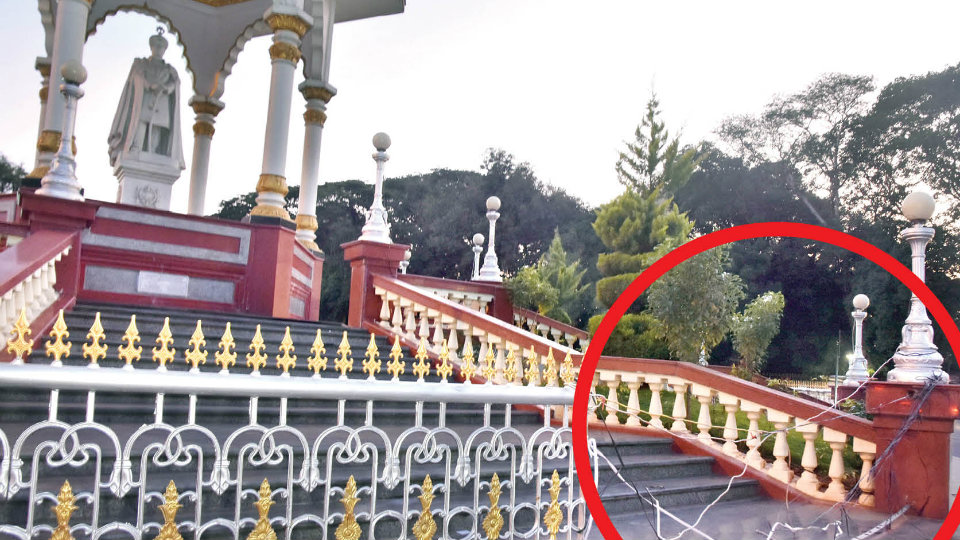 Tale of missing grills and passing the buck

Mysuru: Even as the Heritage City of Mysuru is celebrating the year-long Birth Centenary celebrations of the last ruler of Mysore, Sri Jayachamaraja Wadiyar with a host of memorable events commemorating the pro-people rule of the erstwhile King, the iron grills in front of his statue in the heart of the city have been stolen.

The beautiful Jayachamaraja Wadiyar Circle (earlier known as Hardinge Circle) was inaugurated just two years ago and to protect the landmark structure and the white marble statue, iron grills were installed around the statue.

Now thanks to lack of maintenance, the iron grills right in front of the statue have been stolen. Surprisingly, thieves have made away with a portion of the grills at a place that is busy 24/7 with vehicles passing by every moment. Even the Police who generally patrol the area failed to prevent the theft.

Interestingly, there are two CCTV cameras covering the Jayachamaraja Wadiyar Circle and even the cameras have not recorded the theft. The cameras are placed on the two sides of the Circle and the visuals show only the movement of vehicles while they are incapable of recording the visuals of the front portion of the Circle.

When Star of Mysore called the officers from Mysuru City Corporation (MCC) Zone 9, 1 and 6 under whose responsibility the maintenance of Jayachamaraja Wadiyar Circle comes, the officers just passed on the buck without even bothering to answer the questions.

The Jayachamaraja Wadiyar Circle actually comes under Zone 9 and when the Circle was built, the responsibility of maintaining it was jointly handed over to Zone 9, 1 and 6. Zone 9 Development Officer Harish told SOM that his Zone does not have anything to do with the Jayachamaraja Wadiyar Circle. “All the responsibility of maintaining the Circle lies with Zone 1,” he said. Next, SOM called Zone 1 Development Officer Bharath who straight away passed the buck on Zone 6. “We are in no way related to the maintenance of the Circle as it comes under Zone 6,” was his curt reply.

After listening to Development Officers of Zone 9 and 1, SOM then called Zone 6 Development Officer Nagaraju also who denied that his Zone has the responsibility of maintaining the Circle. “The jurisdiction of Zone 6 ends near the Selfie Spot,” Nagaraju said. He, however, added that the missing grill has come to his notice. “We will take measures to repair the same,” he added.

As the maintenance of Jayachamaraja Wadiyar Circle does not come under Zone 9, 1 and 6, as per respective Zone Development Officers, the question now is who has the responsibility of maintaining the Circle? Only the MCC top brass has the answer.