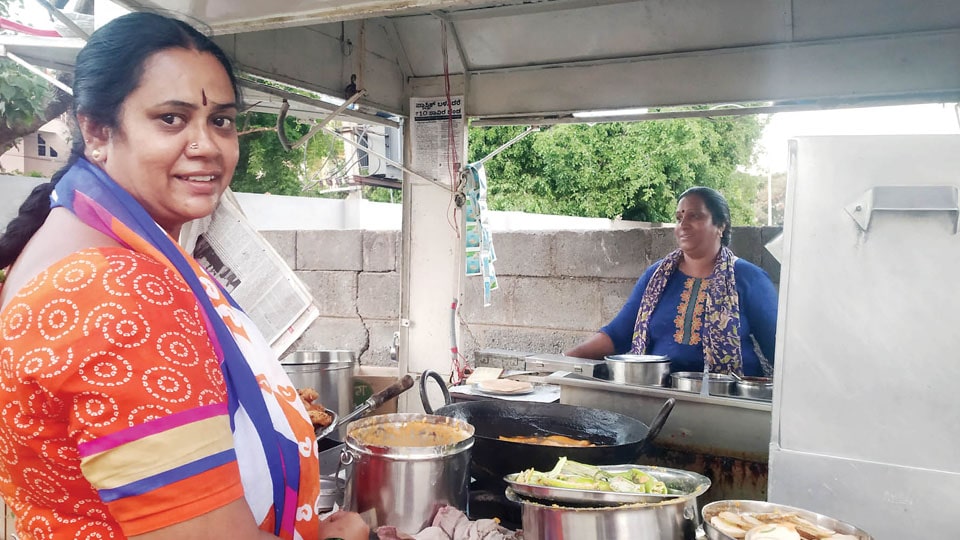 No matter what one does the other days but when it’s celebrating International Women’s Day, everyone rattles about women empowerment, gender equality, women achievers, etc.

Even when we speak about achievements by women, one thinks or rather most of us speak about something achieved by women outside the confines of kitchen or something other than cooking. But we always forget cooking, something that is enjoyed by one and all, is in itself an achievement. In Hinduism, ‘Annapurna’ is considered as Goddess of food and someone who provides food is treated equally divine.

Going with this year’s Women’s Day theme of ‘Balance for Better’ it is inappropriate not to appreciate women working outside and at the same time taking care of their family’s food needs. And there are some enterprising women who turn daily cooking routine to a brilliant business idea like this group of women who run ‘Sri Annapurneshwari Fast Food’ close to Vijaya Bank near Goblimara Bus Stop in J.P. Nagar.

Three women, all sisters, have been running the show 13 years. Rain or shine, they do not fail to tickle the taste buds of a roadside eater be it a bachelor, a professional or a family who wants to grab a bite or two in a fast mode. it was only one woman who started the business. Later, her two sisters joined and the trio became food providers for many.

Sumathi, who suddenly lost her husband Somashekar, an auto driver by profession, was pushed to the wall after her husband’s death and she did not have a source of income to lead her life and to fend for her son’s education. She joined her co-brothers and opened a fast-food centre but unfortunately that was not successful.

Seeing their sister in distress, Maheshwari (wife of Dinesh Babu, who also assists them now in running fast food business) and Lakshmi (wife of Venugopal, a government employee), joined hands and relaunched the fast food centre.

Initially, they started catering business in 2005 on a contract basis at Railway Running Room but it was too tiresome a work as they had to work 24×7. Hence, after completing the year-long contract, they decided to start their own fast-food centre. And there was no looking back.

On their husbands’ support, Maheshwari and Lakshmi said without their support it would not have been possible. The hubbies help in purchasing necessary goods and shift the food prepared from home to the fast food centre and are moral support too.

“We start preparing food at 4 am and then it is a continuous process as we open the fast food centre twice a day — 7.30 am to 10.30 am and 5.30 pm to 9.30 pm on all days. Only on Sundays, that too only in the evening, the fast-food outlet remains closed. We prepare idli, dosa, chapatti, rice bath and vada. We maintain the taste and quality and so far we have not received any complaint and it has always been a positive feedback about taste, quality and quantity.”

These three determined women are the daughters of Chitti Babu and Shakunthala, residents of J.P. Nagar. Eighty-four-year-old Chitti Babu runs a cycle shop at Vidyaranyapuram and he is another source of inspiration for the family to lead an independent life for the trio.

The trio’s grandmother 81-year-old K.G. Rukmini, wife of K. Govindaraju, charge man at Railway Workshop, Mysuru, was also selling idlis at the Railway Workshop to support her family of five sons and a daughter. And she is their inspiration.

Twenty-nine-year-old S. Santhosh, son of Sumathi, who completed his ITI after PUC, though tried for jobs in industry sector, was not happy with the salary they offered. He too has joined hands with his mother and aunts to run the fast-food outlet and leads a contended life.