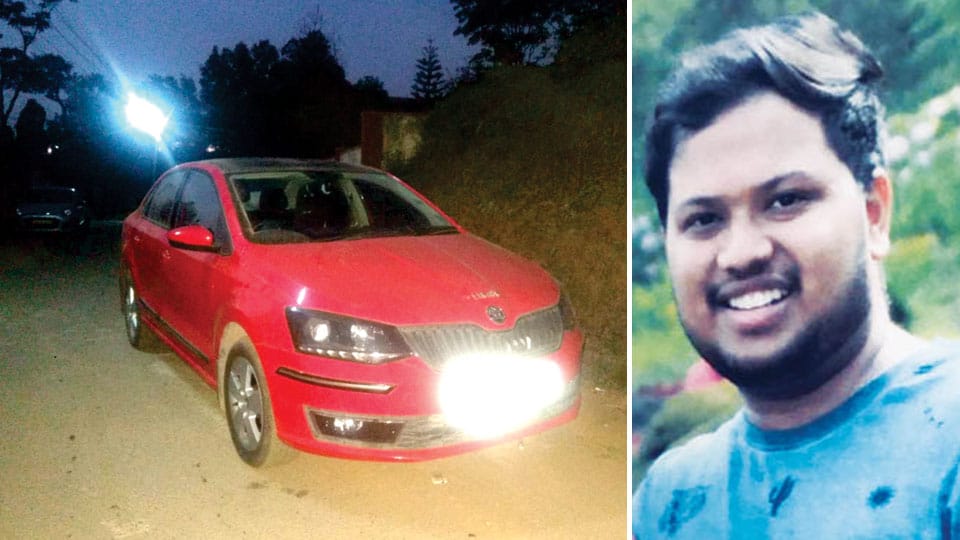 Madikeri:  Telangana-based mining businessman Maruthi Prasad’s son 26-year-old Vinay who had come to Kodagu on a tour is missing since Jan 17. His car has been found abandoned in Madikeri on Jan. 19.

According to Madikeri Police sources, Vinay, hailing from Saroornagar in Telangana, who runs a garment business, had taken loans up to Rs. 2 crore.

Saroornagar Police are investigating whether Vinay has been kidnapped. Vinay had on Jan. 17 told his mother Mallika that he was going to Bengaluru with his friends in his Skoda car (TS-07-FU-3377).  After having left the house in the morning hours, Vinay called his mother and brother Vishal around 10 pm on Jan. 17 and said that he is leaving Bengaluru to Madikeri along with his friends.

Within minutes, he called his father and informed him that he was in Hyderabad, and that he was on his way home. When he did not return home that night, Prasad called his son on the morning of Jan. 18 only to find his mobile phone switched off. Immediately, he contacted Saroornagar Police and complained to them that his son had gone missing.

Meanwhile, Biddanda Babbu Ganapathy, a resident of Virajpet Road in Madikeri, on Jan. 19 evening told the Madikeri Police that a red Skoda car had been abandoned near his house. Madikeri Police, led by Inspector Anoop Madappa, opened the unlocked car and found Vinay’s cell phone and the SIM card and calls were traced to Telangana.

The Police later alerted Telangana Police based on the car’s registration number and the Telangana Police, sent a team from Saroornagar limits to Madikeri. Vinay’s father Maruthi Prasad too came to Madikeri in search of his son on Jan. 23. The Police are checking CCTV footages of nearby areas to trace Vinay.