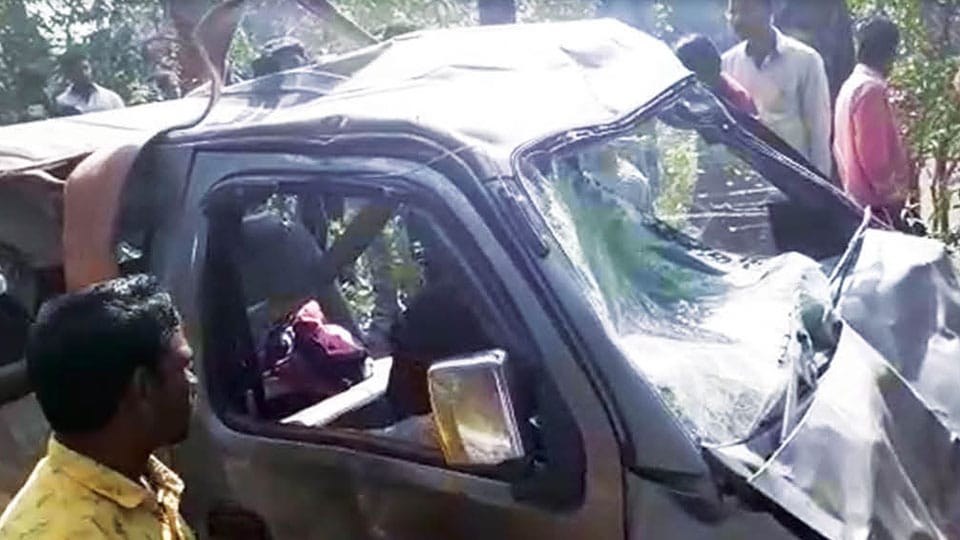 Woman from Mysuru killed in car accident near Chikmagalur

Car falls into 50-feet gorge; family was on its way to Sringeri

Mysuru:  A woman from Mysuru was killed and nine members of her family were injured when the car in which they were travelling met with an accident yesterday morning. The car fell into a 50-feet gorge near Koppa in Chikmagalur and the family was on its way from Mysuru to Sringeri.

The deceased has been identified as Leelavathi (55), a resident of Vidyaranyapuram. All the nine injured have been admitted to Koppa hospital. Among them, Padma and Sowmya are in a critical state and have been shifted to Manipal Hospital.

According to Jayapura (near Chikmagalur) Police, the family was proceeding towards Sringeri in a Maruti Eeco car (KA 42 M 9202) and there were 10 persons including the driver in the vehicle.

The family left Mysuru on Wednesday at 10 pm as they had to reach Sringeri by morning for the Aksharabhyasa of Leelavathi’s grandson. They had information that the Aksharabhyasa closes at the temple at 8 am and the family was in a hurry to reach the destination.

The family members included Leelavathi, son Ravikumar, son-in-law Umashankar, daughter-in-law Sowmya (who has been admitted to Manipal hospital in a critical condition), Sowmya’s mother Padma (also at Manipal hospital), and children Sinchana, Tanush and Harshith. Harshith has sustained a fracture on his hand and he is being treated at Apollo Hospital in Mysuru.

Police said that the family, in a hurry to reach Sringeri, lost its way and were proceeding on Koppa-Jayapura Road. At around 5 am, the driver lost control over the vehicle while negotiating a curve and the vehicle plunged into a gorge. As it was dark, other travellers on the road could not hear frantic screams from the vehicle. After one-and-a-half hours of traumatic experience, the screams were heard by other motorists and the family members were rescued, the Police said. Police added that the Aksharabhyasa of children does not close at 8 am and instead it goes on till 1 pm.