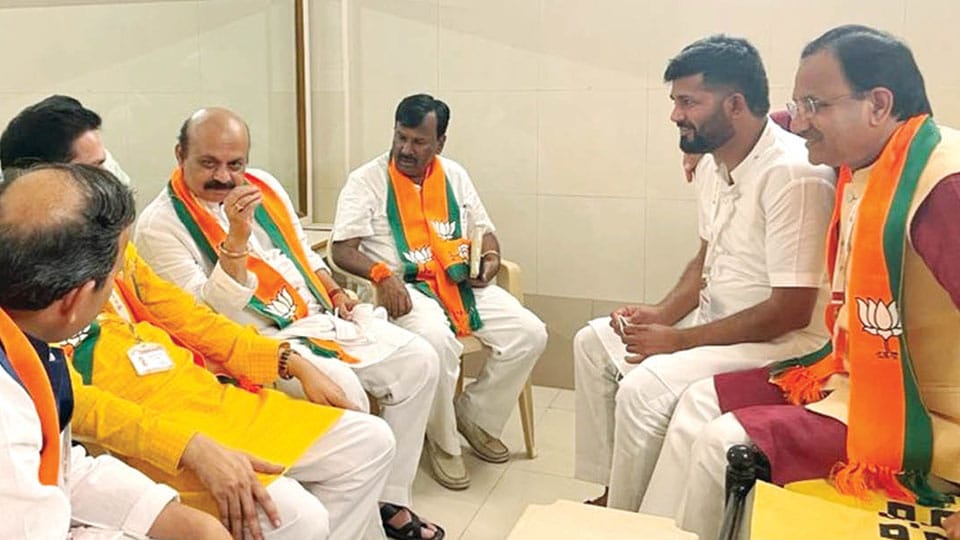 Temple demolition will not recur: CM

‘Razing of Nanjangud temple pained everyone; steps to be taken to rectify mistake’

Davanagere: Chief Minister Basavaraj Bommai has said that his Government is contemplating taking legal and administrative steps to ensure that instances such as the temple demolition in Nanjangud do not recur. He was addressing partymen after inaugurating the State Executive Meeting of the BJP in Davanagere yesterday. The two-day event began on Saturday and ended last evening.

Under fire from not only Opposition parties and Hindu outfits but even from BJP leaders and functionaries over demolition of temples, especially the centuries old Huchhagani Adishakti Mahadevamma Temple in Nanjangud, Bommai announced that his Government has decided against razing any more temples and will explore other options to deal with the Supreme Court directive.

“The demolition has pained everyone and had taken place because officials took action in a hurry without bringing it to the notice of the Government. We will take a firm decision that will put a full stop to such instances that disturb peace and religious sentiments,” he said.

The CM said that it was not the first time such a thing had occurred as similar incidents had happened in Gujarat, Maharashtra and other States where senior leaders had resolved the issues showing Statesmanship.

“The Nanjangud incident is a challenge and all steps would be taken to end such issues. Also, the Government will mitigate the pain suffered by devotees. I assure you that a discussion is on with the legal experts to find out an administrative as well as legal solution to avoid an incident like this in the future,” he added.

Taking a dig at the Congress, he said after Independence, Congress started its political innings by riding on the wave of Independence. “They (Congress) did not have any clear principle and ideology, due to which Mahatma Gandhi advocated disbanding the party but it always used Gandhiji as their ideological showpiece because they knew that their politics won’t survive without him,” Bommai said.

The Chief Minister said the Congress has shifted now from one Gandhi to another. “On the one hand was a democratic Gandhi and on the other, there was a dictatorial Gandhi,” Bommai said.

On the contrary, Prime Minister Narendra Modi changed the course of politics by showing concerns for everything right from cleanliness to sports. According to Bommai, the Modi Government believes in ‘Sarva Vyapi Aur Sarva Sparshi Sarkar’ (a Government all-pervading and touching upon everyone’s life).

At the meeting, former CM B.S. Yediyurappa said the Modi wave would help win Lok Sabha elections easily, but party leaders and workers need to put in the effort to win State elections. “Let us not be under some notion. We should also put in efforts and by helping development works reach the people, we should win the elections,” he said.

Huchhagani temple will be rebuilt: MP

The demolished Adishakti Mahadevamma Temple at Huchhagani village in Nanjangud taluk will be rebuilt. “A new shrine will be built in the same village. I have discussed the issue with Chief Minister Basavaraj Bommai and he has agreed,” Mysuru-Kodagu MP Pratap Simha said.

The MP said that the CM will be in Nanjangud to initiate the temple construction. “The temple will not come up at the same site but built at another location. The temple was demolished on Sept. 8 as the Taluk Administration had ordered so after misreading a Supreme Court order. I have explained to the CM the circumstances that led to the demolition and he too agreed for an urgent need to protect Hindu shrines from the threat of demolition,” he said.