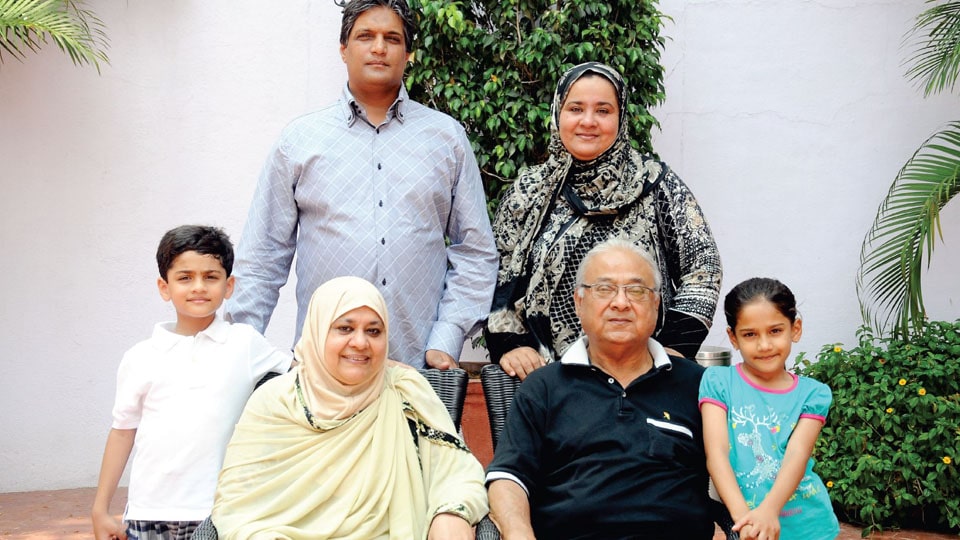 The legendary singer Mohammed Rafi’s daughter Nasreen Ahmad and son-in-law Meraj Ahmad were in city recently as guests of honour for ‘Adab Rafi-2’ organised by Rotary Ivory City Mysuru. The couple arrived at a Club in the evening in a car driven by a young lady.  They were greeted and as the young lady came along, this writer casually asked her how she was connected to Rafi’s daughter and son-in-law. She casually mentioned that she was their daughter and lives in Mysuru! It hit me that one of the greatest singers’ grand-daughter had been living in our city leading a very low profile life, married to a charming young man, who has kept it a closely guarded secret.

In a tete-a-tete with Star of Mysore at a posh hotel in city, the highly articulate Nasreen, who spoke impeccable English, shared some private moments she had spent with her father Rafi, recollecting many memories, including the day the singer passed away, the Lataji controversy and the Bharat Ratna issue, even as Meraj also joined her in his own recollection with the singing maestro, as their daughter Firdaus and son-in-law Abdul Khalid Shariff listened attentively. She also surprisingly revealed that none in the family including the grand-children took to singing.

On Mohammad Rafi’s nature: My father never used to socialise, he was so humble and child-like. He never used to count money. He would put his hand in the pocket, ‘Jo haat me aa gaya de diye.’ He was very fond of dressing. He used to take one hour to dress. But, for instance, when he went to attend a wedding, he would enter the gate, greet the couple and in five minutes he would be out of the hall. Though he took so much time to dress, he would never linger.

Rafi kept his family away from the film industry: My father had kept the whole family away from the film industry, though he sang for all the legendary heroes of his time. We have never met any of the film stars in our lives. You won’t believe it, I have never met Lataji and I met Ashaji for the first time at the Mohammad Rafi Award, instituted by Spandan Arts, an NGO headed by Mumbai BJP Chief Ashish Shelar in 2014 when we were invited to present the award. 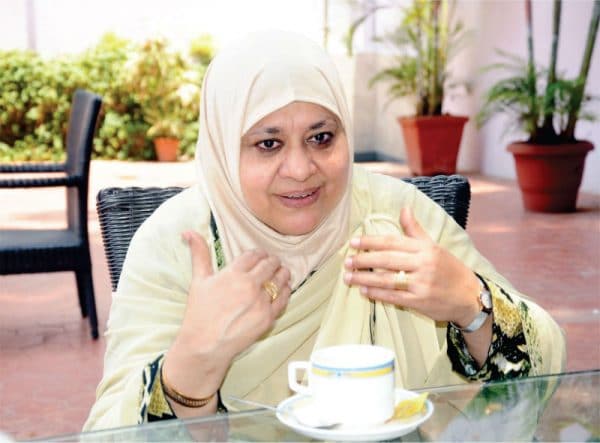 Rafi’s daughter Nasreen Ahmad opens her heart out for SOM.

On Rafi’s children sent abroad: My father sent all my brothers to England to study. We were seven children — four boys and three girls. And alternately a boy and a girl were born! The eldest and the youngest were boys and I was the fourth in line. All my brothers were sent to England to study. I myself went there and did not like London at all as it was very cold and I returned very soon telling my father that I did not like the place.

My husband is my cousin (my mother and his mother are own sisters). Oh! I must tell you that when we got married in 1971, my father had invited the whole film industry and I saw all the stars then like Raj Kapoor, Dilip Kumar, Dev Anand, and even the yesteryear heroines. But they just came, greeted us and left. That is the only memory I have of them.

READ ALSO  Pt. Rajeev Taranath: A Sarod Maestro and a Legend in our times-1

Man of few words: My father was a man of very few words. When he used to rehearse at the house, he would retire to his room and there was pin drop silence. My mother had a big role in bringing us up. She was the opposite of my father, who was cool and patient.

On Rafi’s generosity: Once he saw a man trying to stand on one leg alternating as the Bombay heat was so much. He just asked the driver to stop the car, asked him to give the pair of slippers that he (Rafi) was wearing.

On another occasion, he spotted Khan Mastana, a forgotten singer on the road, stopped the car, took him to the house, bathed him, gave him food and sent him back, recalled Meraj.

The day the greatest singer’s voice was stilled: My father was very possessive about the girls. I was suffering from a slipped disc. He wanted me to stay with him at his house. He kept a 24-hour watch on me. I could not get up. I still remember like it was yesterday. My birthday is on July 20. He came to my room with a big bouquet, kissed on my forehead and wished me the best. Exactly ten days later on July 30, it happened.

He could never say no to anybody. That morning, new-comers from Calcutta had come to discuss about music. After the discussion, he came back and he felt a burning sensation. He told my mother, “Yaar, idar kutch ho rahan hain.”  Her eyes went to his toe-nails, she saw it turning blue. She shouted, ‘call the doctor.’ My father did not want any help nor an ambulance. I don’t know where I got the energy from I came out of the room hearing the commotion. He kissed me and my younger sister on the forehead and said, “Mere dua aap ke upar hamesha rahen.”  Surprisingly, he had asked my husband, “Aaj tum kaam pe mat jaana.”

My Nani, Bhabhi and everyone else was there in the ICU. I entered it, looked at my father and he looked at me as if trying to tell me something. The doctor said, “Please excuse me,” and asked me to move out. I was standing behind and within a minute, the doctor came and announced, “He is no more.” [Tears were streaming down her eyes, even after nearly 37 years of Rafi’s passing away].

I cannot forget the last days. The day he passed away was a Thursday. The next day was the Friday Namaaz. Raj Kapoor had come with the Pandits, there was Parsi and Catholic Priests. It was pouring. Nearly 3 to 4 lakh people had come to pay homage.

Fond of grand-daughter Firdaus: My father was very fond of my daughter Firdaus. He was so attached to her that she would go and sleep with him. He was a foodie. Though he was diabetic, he loved to eat sweets. He was also fond of Coca-Cola, remembered Firdaus.

Firm faith in Almighty: It was the late 1970s and the star of Kishore Kumar was on the ascendance and my father’s popularity was just a bit down. He never felt bad about it. He always used to point his finger up and say, “Jo bhi khuda deta hain.” Rafi was very aware of the ups and downs in the industry and how people treat you when you are on top and how they ignore you when your downfall begins.

That is why he always treated his musicians very well. He ate the food they ate and on his tours abroad, he would always insist that he also be put up with them never demanding preferential treatment.

Son-in-law recalls: The first time I went with him to the recording was in 1966 when he was singing the song “Khaise Samajoon Badi Nasamaj…” and the movie was Suraj with Rajendra Kumar in the lead. He would warn me to keep quiet. One incident I recall vividly — It was R.D. Burman and the song was ‘Yamma, Yamma’ from the movie Shaan. As Rafi was entering the studio, RD  asked him whether he could match his pitch as it was a high-pitched song. As usual, my father-in-law gave his stock reply, “Chalo main dekta hoon.” He never boasted that he could match anybody. After the recording was over, RD just fell at his feet and I was a witness to this moment. Rafi’s favourite song was ‘Suhaani Raat Dal Chuki, Na Jaane tum kabaaoge…’ 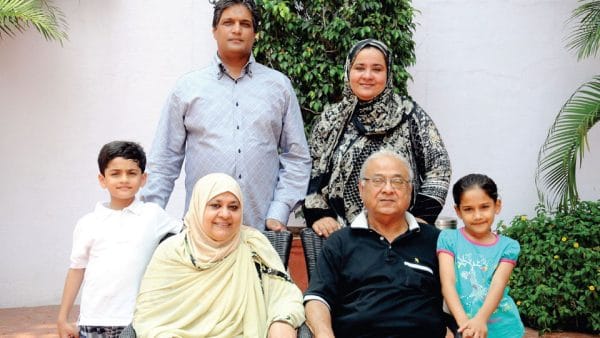 Lata controversy: This was a controversy regarding royalty and my father was clear that once he has been paid for the song, it was the end of it. But Lata and Talat Mahmood raised the issue of royalty and my father was not in favour of it. But it took an ugly turn and a needless controversy arose when Lata said my father had apologised to her (much later after he had passed away). I felt hurt when she said it. Now, I am a great fan of Lata, the nightingale of  India. Everybody calls my father a saint and fans have kept him alive.

On demand for Bharat Ratna: The family has never demanded Bharat Ratna for my father. He does not need it. After all, he is Bharat Ka Ratna. But it is his fans who are demanding it.

On the Hijaab:  Both Nasreen and her daughter Firdaus wear the Hijaab. Asked about it, this is what Nasreen said, “I started wearing this about 15 years ago when my first grand-child was born. But when I was 16 or 17, I became very religious and told my father that I wanted to wear the burqa. My father replied, “Bahut acchi soch hain beti,” and then went on to tell me, “Aankhon ka parda zyada zaroori hain.” This is how my father was, who never spoke much, but whenever he spoke it was pregnant with meanings.

Rafi’s Mysuru connection: My eldest daughter’s family friend, who is from Mysuru, told us about Abdul Khalid Shariff, who was all praise for him. We came down to Bangalore to see him and my husband, who is very shrewd, told me, “Yeh ladka bahut accha hain.” Now, I am very happy that my daughter has settled down in Mysuru.

Firdaus, looking fondly at her husband says, “I am very lucky to get him. He takes such good care of me.” Khalid reveals that they got married on 8.08.08, even as they all look fondly at the twins Ayaan Shariff and Zaraa Shariff, all of seven years playing near the pool.