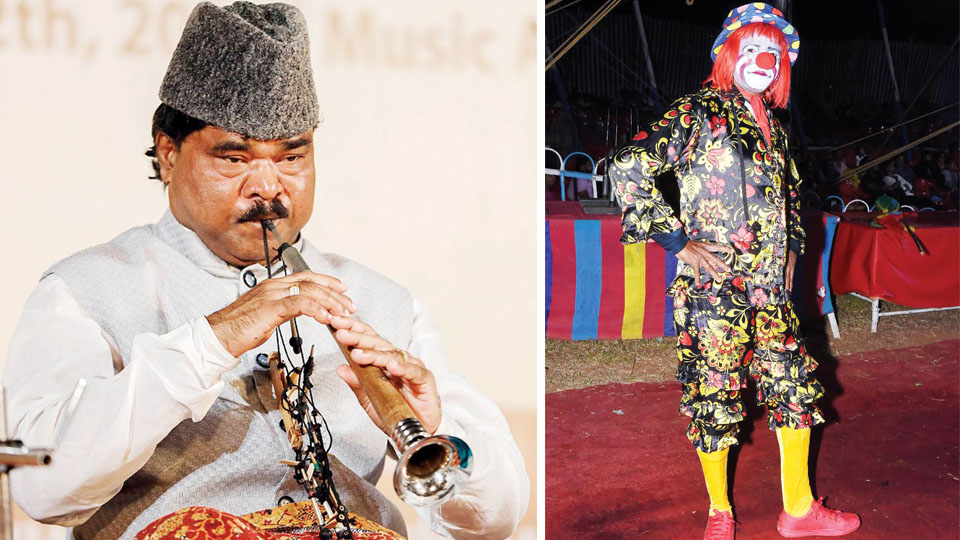 A royal touch was given to the Great Bombay Circus when it was inaugurated by the royalty Mrs. Pramoda Devi Wadiyar on 24th September as one more attraction for Dasara. Except for the last two pandemic years, circus has always been an attraction during Dasara.

I decided to entertain myself and my family by attending the first show on first day, like cinema crazy people do, deriving great pleasure in bragging about it with others.

Seeing a circus after many years I was both delighted and disappointed. Delighted because of different kinds of shows and acts from circus performers — the gymnast, stuntman, acrobat, trapezist, artist, dancer, the clown, jugglers, somersault, rope walkers, fire eaters and spewers, hoopers etc., no end. The tower basket ball act caused anxious moments for the spectators and it was a skill par excellence.

Disappointed because there were no animals. In the past there used to be animals — elephants, tigers etc. — and a ring master with a whip in hand. These trained animals used to be the other entertainment the spectators looked forward to, specially children. After all, children love animals. Because of the perceived cruelty to these animals, the use of animals in circus has been banned. So much for our love for animals. Sadly we are yet to love human beings. However, I saw a few dogs and parrots in action.

Clowns and jokers play an important role to make the children scream and jump with joy at their antics. In fact most of the parents came primarily for the sake of their children or grandchildren, myself included.

Usually, a travelling tent circus like this will have two, three or four rings for different acts. Which is why it is called Big Top. Well, what we have here is one ring and all the acts happen here under one top.

Circus is basically a demonstration of human skills and daring watched by people, from the tiers of seats, craning their necks and turning their heads, simultaneously managing their restless brats !

As I watched the show, I remembered the famous Raj Kapoor film of 1970, Mera Naam Joker. That he had shot the film with the Russian circus troupe was the hashtag for promoting the film. It was a good film but with a streak of sadness. Raj Kapoor plays the role of a joker.

Here I am reminded of a wisecrack. That a joker in a circus though makes spectators laugh and happy, he is the saddest person personally. The film Mera Naam Joker revolves around this theme. Let it be.

After watching the show, I thought since there are no animals there should be more children-oriented acts that would make them laugh and wonder. This in addition to the usual acts done by trapeze artistes, acrobats and others.

Last Saturday was a good day for me for two reasons. Of course, one was the visit to the Great Bombay Circus in the evening and another, viewing an interesting interview on Chandana TV in the afternoon of the Shehnai player and classical vocalist of International repute Pandit Dr. S. Ballesh Bhajantri (known generally as Ballappa) of M.K. Hubli village, Kittur taluk, Belagavi district.

He is a recipient of Padma Shri and many awards. A humble, soft-spoken soul without any air about his achievement and musical genius. He has his share of contribution in the famous Telugu film Bahubali and of our own Dr. Rajkumar’s Sanaadi Appanna where Shehnai music had enriched the films.

The film Sanaadi Appanna is notable for the fact that Ustad Bismillah Khan played the actual Shehnai for Rajkumar’s character in the movie. Pandit Dr. Ballesh Bhajantri spoke of great Ustad Bismillah Khan, the ultimate genius of a Shehnai player of all time. He confessed that Bismillah Khan was his inspiration and confidence-builder and remembered him with great nostalgia and gratitude. I hope Ballappa is invited to perform in Dasara music programme. If so, I would not miss him.

I felt a bit diminished as a journalist when I realised that I did not know about such an artiste till I saw that interview. But then our life is such that there is so much to know and very little time. And as years roll by memories also fade and fail us. If it is so, so be it. Let us count our blessings, instead of regretting the lost opportunities or lack of talents and skills found in the circus artistes and musicians.