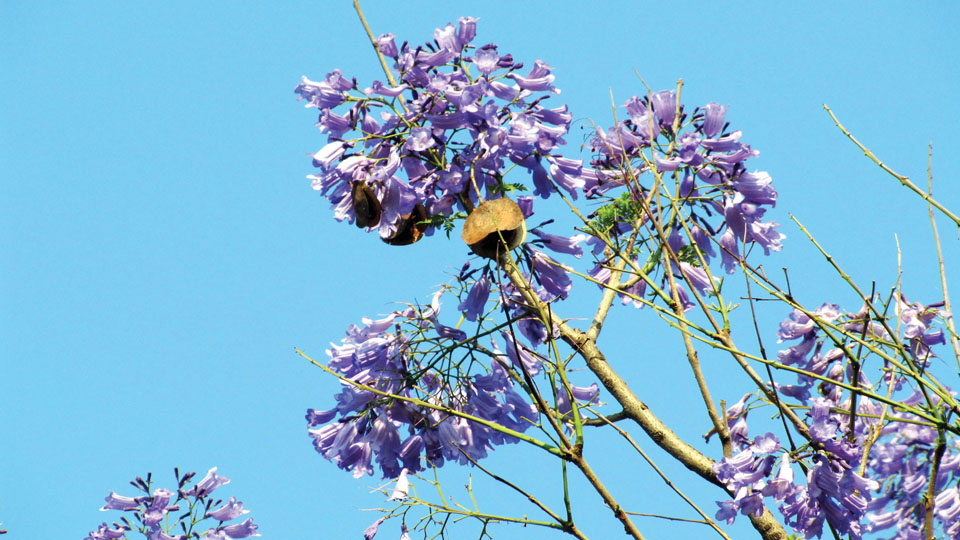 The grandeur of Jacaranda

End of Shishir Ritu (winter) brings about remarkable changes in many deciduous trees. Several species would have shed all their leaves to begin the rejuvenation process: the new cycle of life by producing fresh  foliage & flowers. Several of these trees begin new life by producing new blossoms on bare branches.

Among these, Jacaranda is the first to appear on stage by initiating blooms, which, in a short time, cover the entire canopy making it the most attractive tree. These trees covered with clusters of trumpet-shaped fragrant, purple blooms often with fallen flowers forming a carpet under the tree makes the sight a painter’s delight. None can match the grandeur of Jacaranda!

The tree has been a part of Mysore’s landscape for decades. A South America beauty, it is native to Southern Bolivia and Argentina but widely cultivated in the tropics. It is known by common names such as Blue Jacaranda, Brazilian Rose Wood, Trumpet Tree, Black Poui, Nili Gulmohar, Green Ebony. The botanical name is Jacaranda mimosifolia (Bignoniaceae family). The  generic name ‘Jacaranda’ is the Neo-Latin version of the word ‘jakara’na’, a word in Guarani language spoken by native South American  ‘Tupi’  community, meaning ‘fragrant’, ‘aromatic’, ‘scented’. It aptly describes the aromatic flowering of the Blue Jacaranda. The specific name ‘mimosifolia’ is due to its resemblance to leaves  of Mimosa (Touch Me Not).

It is a medium sized open crowned deciduous tree, very graceful to look at. The twigs are slender and slightly zigzag and light reddish-brown in colour. The mature  bark is thin and grey-brown; smooth when the tree is young; eventually turns into a fissured and cracked bark. Wood scented. The leaves alternate, twice feathered, finely cut and fernlike with numerous pairs of tiny pointed leaflets. They resemble Gulmohar leaves. The flowers tubular (bell  shaped), lavender or purple blue, in open clusters at the end of the branches. They fade in to lilac later. Each spray (bunch) carries up to 90 blossoms. The individual flower is about 2” long; Calyx (sepals) 5 lobes, united; Corolla (petals) lobes 5;  4 fertile stamens, dydynamous (2+2) and 1 sterile club shaped “staminode” bearing a dense tuft of bristles; Ovary bicarpellary; Fruit, a dry dehiscent pod, brown, technically called a capsule spontaneously opens into  two halves on drying and releases winged seeds. Capsules may hang on the tree for up to 2 years.

Many look at this tree simply for its ornamental and aesthetic value in landscaping. In reality, it has immense commercial value. The highly valued wood, which is  scented & ornamentally streaked (cream and pink toned wood) is commercially known  as  ‘Pallisandre.’ The wood, with a pleasant smell, is used in carpentry for cabinet making and in automotive industry for luxury cars.

Medicinal values are immense. In its nativity Jacarandas are used in tribal medicine and historically been used on E-coli as well as Staphylococcus aureus or staph bacteria and  found to be effective in the treatment of venereal diseases (syphilis and gonorrhea).

Application of Jacaranda extract on syphilitic sores helps them heal fast besides controlling the painful urination accompanied by pus in gonorrhoea patients. The volatile oil obtained from Jacaranda leaves and bark has been found to be effective in the treatment of buboes (swelling in the lymph nodes in groin or underarm characterized by blisters) caused by venereal diseases. The lovely fragrance of Jacaranda flowers are said to work “extra-medicinally” & turn the negative qualities in a person to positive ones. It has been reported that homoeopathy has myriad preparations of Jacaranda. Now, Jacarandas are reported to be used even in Ayurveda and Unani formulations.

One can have a magnificent look of these trees with  full violet blooms at the main entrance to palace (Eastern gate). Lining behind the fort these trees provide a colourful background to gopuras. Also seen on several   avenues, private gardens, parks and Manasagangothri campus as well.

Dr. Mahadeswara Swamy Tree facts
Optimisation of city bus routes need of the hour
Prof. H.N. Aswathanarayana: A mentor who is no more!