Home » Columns » Prof. H.N. Aswathanarayana: A mentor who is no more! 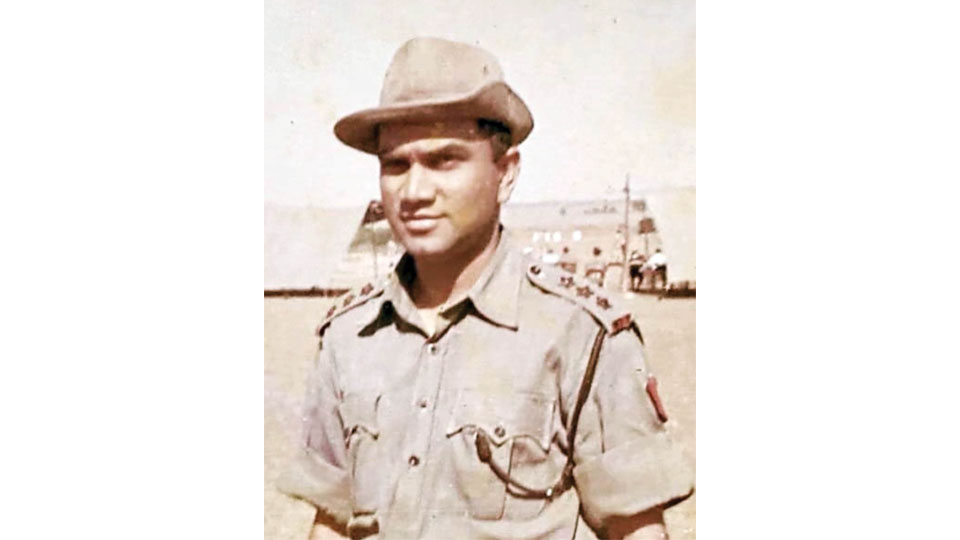 Prof. H.N. Aswathanarayana: A mentor who is no more!

In the recent passing away of Prof. H.N. Aswathanarayana, a former Professor of Mathematics at the St. Philomena’s College, I have lost a mentor and a very fine man whom I had known over the last fifty years. We first met in the year 1970 when I got admitted to the College for my PUC. Although I was not a student of Mathematics, I had an occasion to listen to his one-hour introductory lecture about the need for students to join the National Cadet Corps (NCC) to inculcate discipline and the spirit of nation building.

Holding a Captain’s rank at that time and being the NCC Officer of our College, through this very inspiring maiden lecture, he made a splendid case in impressing upon our young minds the advantages of joining his fold, which resulted in many of us volunteering to get enlisted. Having already been a member of the Bharath Scouts and Guides for three years as a High School student, I naturally did not need much coaxing to wear the starched uniform once again and so I immediately joined the 15 Karnataka Infantry NCC Battalion, where I remained for the next two years.

After that, all through our NCC days, we would eagerly wait for Sundays to come because that was the day of the weekly parade at our College. That was also the day for much vigorous physical activity followed by much fun and camaraderie over a hearty, outdoor breakfast! Some of us would be there in uniform well before time because we would want to be present to receive Prof. Aswathanarayana at the door of the cellar under the Chemistry Lecture Hall where he had his windowless office. The moment we heard the faint roar of his Jawa motorcycle in the distance, we would all spring to attention to receive him with our crisp salutes and then jostle with one another for the privilege of pushing his 1969 model 250cc bike, with its registration number, MYM 8284 and parking it inside the dark and humid cellar!

After the rest of the troop members turned up at the ground behind the Science Block, the parade would start with Prof. Aswathanarayana, looking every inch a tough-as-nails Officer, shouting the commands in his booming voice, which rings in my ears even to this day! Although a strict disciplinarian, who would show no lenience in punishing late-comers, he was actually a most kind-hearted man when it came to choosing the kind of penalty that he meted out to them.

So, instead of the most preferred and most deterrent regimental punishment of crawling across the field on knees and elbows, which would sometimes leave them bruised and bleeding, it would invariably be a mild and only symbolic one with an order to run three rounds around the perimeter of the not too large field. For the very late arrivals, it would be an order to run with the ancient 303 Enfield rifles held aloft, because by that time the rifles would have been brought out of the armoury and issued to the cadets!

Our armoury, with its round-the-clock Police security picket, was located in another dark and damp cellar under the Arts Block. With its array of different versions of battle rifles, including a couple of Light Machine Guns (LMGs) and a solitary 9mm Sterling Carbine, the armoury, which was in army parlance called an Arms Kot, used to be a very fascinating place for me. All through my NCC years, I would therefore always volunteer to assist the Army Jawans and Junior Commissioned Officers (JCOs) during their periodic weapon cleaning and oiling ritual.

Although the elaborate process used to be quite rigorous because it involved using a device called a ‘pull-through’ to clean and polish the interiors of the barrels and it would leave me sweating and smeared with grime, I used to love it!

I had the occasion to attend many NCC training camps under the leadership of Prof. Aswathanarayana and at the Combined Annual Training Camp at K.R. Nagar in 1970, he even recommended that I be allowed to fire a Light Machine Gun (LMG) during a demonstration of the weapon, a privilege normally reserved in the NCC only for Officers and Army personnel. It was one of the most thrilling moments of my life and a Certificate issued by Prof. Aswathanarayana to me, testifies to this fact.

Even after I left the NCC and the College, I continued to be in touch with him and he would take a great deal of interest in knowing about my progress through life. Whenever we met, the two of us would like two friends, instead of a mentor and pupil, spend much time reminiscing about the good old days. But he was such a humble and modest man, that at these many meetings, he never once mentioned that he had actively participated in our freedom struggle and had even been imprisoned for his role in it.

This was something I discovered only from his obituary which I read in the SOM three days ago! When I called up his son Yoganand yesterday morning to convey my condolences to the family, he told me that his father was actually a very secretive man when it came to his achievements and accomplishments. He would never speak about them. The same was the case when it came to talking about his pains and discomforts even with his own family members, which was why they never got even an inkling of the terminal illness that quickly took him away from their midst.

I felt happy to learn that his son Yoganand left a lucrative job elsewhere to be here in Mysuru and look after his parents during their old age. I also felt much relieved to know that he still has his father’s good-old motorcycle with him in perfect running condition and that he still rides it regularly. How wonderful! Since he refused to take rest even after his retirement and was actively involved in the management affairs of a College in the city till his very last days, Prof. Aswathanarayana lived his entire life with a sense of purpose and service to society. And, that is why he will be missed by many! May his soul rest in peace. Amen!

15 COMMENTS ON THIS POST To “Prof. H.N. Aswathanarayana: A mentor who is no more!”