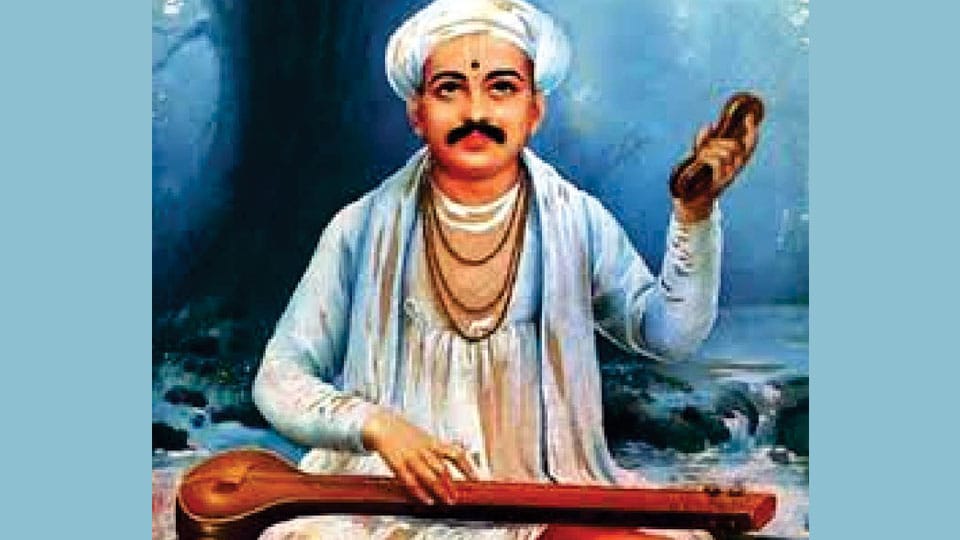 India is a land of saints. They are born as and when required to keep dharma or moral order intact and to tell the people about its need and importance. This is also called as avatara. Thus hundreds of saints have been born in India right from the time of Vedic period and it is being continued even now.

Lord Krishna has assured us that he is born and reborn in various forms as and when there is chaos in society. This is reflected in the concept enunciated in destroying the wicked and protecting the good (Paritranaya Sadhunam Vinashayachadushkritam). Under this background, the life and message given by Saint Tukaram is examined here.

Saint Tukaram was born in Dehu village, Maharashtra, in the year 1608 AD. He belonged to a family the main aim of which was to follow dharma, protect it and to spread its message among the people for the health of the contemporary society. Naturally, Lord Vitthala of Pandharapura was the main force to bring the people to the mainstream of useful socio-religious life. The parents of Tukaram followed this principle as the goal of their life. They were rich enough to spread the message of dharma by many means including donating money, building temples and choultries for the poor and needy. Thus this family had endeared itself to the contemporary people.

The father of Tukaram had a small business establishment and made good profits in spite of being highly spiritual. He took minimum profit on his sales and was not greedy. He worshipped his family deity Vitthala with great devotion.

He had a rosary and counted it while uttering the thousand names (sahasranama) of the Lord and also read Bhagavadgita which has guided lakhs of people including Mahatma Gandhi, Tilak and others of our own times. After doing business in the day time, he concentrated on bhajans (chanting the holy verses in the name of Gods and Goddesses) and invited his neighbours for this. They also joined in this religious congregation and thus Tukaram became a religious leader in the town.

Tukaram married and led a family life. In the meantime, his parents died. Added to it there was a great famine in Maharashtra and it became very difficult to run his family. His business also declined and hence he was forced to sell his property including cattle. The famine was so severe that his wife Rukmabai and a son died out of starvation. Tukaram was forced to close down his business. His father-in-law gave him a small loan but it did not help him to improve his business.

Tukaram was greatly influenced by these incidents and was slowly turning towards spirituality. He began reading holy books and meditated on God. He began singing the Holy verses in favour of Gods and Goddesses and this attracted hundreds of like-minded persons. He became famous and people began to worship him as a saint. The religious teachers of high caste of Tukaram’s time became jealous of him as their income dwindled. So they hatched a plan to punish him. One day a cow owned by Tukaram entered into the field of Mambaji and caused lot of damage. Taking advantage of this, Mambaji manhandled Tukaram and his cow. Without understanding the secrecy behind this, people began to suspect Tukaram.

In the meantime, Tukaram had written poems explaining the philosophy of Bhaga- vadgita. Agitated by this, a learned Brahmana by name Rameshwarabhat issued an order asking Tukaram not to write anything and further ordered that whatever he had written so far should be thrown into a nearby well. With sadness Tukaram obeyed and fasted for twelve days on the banks of the river Indrayani. On the thirteenth day the river Goddess returned the bundle of his poems. Thus Tukaram survived by the grace of the God.

Tukaram’s second wife Jijabai was not happy with the way Tukaram was behaving and did not co-operate with her husband. However, Tukaram continued his good deeds. Saint Ramadas and king Shivaji were Tukaram’s contemporaries and the former two seem to have met Tukaram and received guidance from him in their works. Once Shivaji sent some rich presents to Tukaram but the latter returned saying that he does not need the money which cannot guarantee the spiritual pleasure.

Tukaram did not write devotional poems after hard study but the poems poured out of his heart spontaneously. These poems famous as abhangas (unbreakable) have become popular in Maharashtra. They are sung in most homes and temples. Thus the prayers of Tukaram have become quite popular in schools and colleges.

Once a devotee of Tukaram felt that he had neglected his wife because of the teachings of Tukaram and he poured hot water on Tukaram’s body. But by the grace of God nothing happened to Tukaram. Thus he continued to do his noble work whether people liked it or not. Due to old age and hard work Tukaram passed away in 1660 AD. People believed that his body was carried away by a Garuda in a palanquin.

His spiritual career was a guide to the common people for all times to come. He said that his body is not important, his inner self is more important. Thus he confirmed the statement that saints lead a richer inner life whereas others are worried over the outer richness which is not at all permanent. He also said that a saint has to undergo pain so that he can understand the pain of the people by himself and guide them. Most of the ancient saints have undergone this ordeal from time immemorial. This is not instantaneous. It has many stages like awakening to God, purification of the self, practice of prayer, out of contemplation, ecstasy and finally life divine. This is universal and there is no short-cut to it. Rituals are required to bring mind under control but they are not everything. They are only a means to achieve the goal. A person can attain Godhood without going to a temple, provided he is really spiritually devoted to God and do good things to human beings around him.

Tukaram felt that there was a huge gap between as to one ought to be and what he is. This has to be rectified on top priority. Repentance is the important guide for this. The famous saint Jnaneswara says that one should wash himself in the Ganga of repentance. Tukaram attaches great importance to pardoning people for their bad deeds provided they show repentance. In one of the abhangas (poem), Tukaram states, ‘I have fallen a prey to the demon called anger; I have called by names and abused them; I could not control it. Now I have realised my mistake and hence I do repentance by uttering your name as often as possible.’

Practice of prayer is most essential to reach the Almighty. Prayer cleanses the body and the mind. Thus world is created by God and hence if you want to live in this world, you should experience him and this is possible through good thoughts and deeds. To most of us reaching God is difficult and hence we have to achieve through a teacher (guru). He alone can show you the path towards God.

Hence Guru is Brahma, Vishnu, Maheswara. Have faith in Guru. Guru may be your parent, teacher, a friend or any body for that matter. Bhakthi or devotion is another way to achieve the spiritual God. But it has to be practiced with devotion. Tukaram did not take credit for all these things but said, ‘I am preaching only those concepts which have been enunciated by great Masters.’ That was his humility. This endeared him to the people of contemporary times.

However, his teachings are for all times and to all people and not limited to any particular place or time. That is the greatness of Tukaram. Let us simply bow down to Tukaram, follow his teachings and go one step nearer to the God.