Home » Columns » Abracadabra By K. B. Ganapathy » The Rotary Journey: To S. Korea and Japan —2 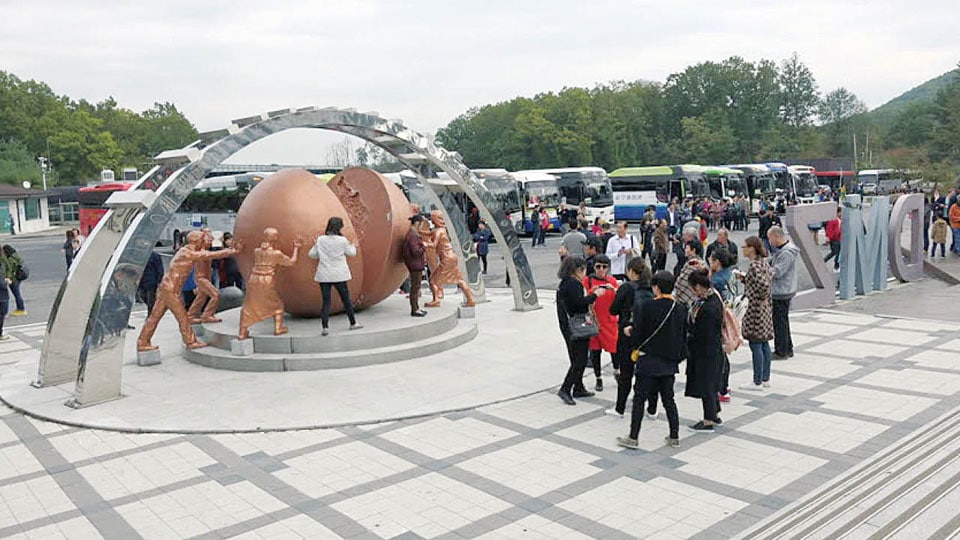 The Rotary Journey: To S. Korea and Japan —2

The world is a book and those who do not travel read only one page.”—St. Augustine

This is my second visit to Seoul and Tokyo. Twenty-nine years ago in June 1989, I had been to Seoul along with the Rotary team to attend the Rotary International Conference. Earlier to this, the 24th Olympic Games was held in Seoul from 17th September to 2nd October, 1988. From there, we went to Tokyo in Japan.

As we know, Korea was a country that suffered during the World War II leading to a Civil War in 1950. Later Korea was divided with North Korea going the Communist way with the support of China and Soviet Union, while America and the United Kingdom halted the march of Communist to South at the 39th Parallel, now known as South Korea.

Think of this. In just 38 years after the devastation of the Civil War, South Korea had surged forward economically so much that it could hold the world’s most prestigious Olympic Games successfully.

In contrast, look at India. After 71 years of independence and peace (except for minor China and Pakistan wars) we were not even able to conduct the Asian Games successfully making a mess of it both the times that we hosted. And to think of holding the Olympic Games should be a far-far away dream despite our country being many-many times bigger than South Korea. I had visited the Olympic Stadia and the Olympic Village with my Rotarian friend Chikka Venkatappa, Physical Director of Mysore University. What we saw left us with nothing but admiration for S. Korea while feeling ashamed of ourselves

The holding of Olympic Games, a visionary decision by the rulers of South Korea, had led to the rush of tourists to that country in hordes throughout the year. Geographically, South Korea is located in an advantageous position close to Japan across the sea. As a result, though Korea was not the preferred destination for many tourists, because of its proximity to Japan, those who go to Japan as tourists include Korea also in the itinerary. In truth, South Korea is not a country of places with tourist interest except perhaps for the Ginseng, the sex tonic. About it later.

South Korea is known as the ‘Land of Morning Calm’ just as Japan is known as the ‘Land of the Rising Sun.’ As we know, before the World War II, Japan was an imperial power having occupied Korea till the end of World War II in 1945. It has a population less than that of Karnataka  — 5.15 crore in 2017. The United Korea was an empire with a King until it was occupied by Japan in 1910. In one sense, the World War II was a blessing in disguise specially for South Korea. Though basically an agricultural country, its economy is driven by giant industries — Samsung, LG, Hyundai and entertainment industry. There is a Gangnam Street. Remember the Gangnam style dance going viral in Social Media?

The word DMZ is the first one to roll out of the lips of our Guide and it was repeated so very often till we moved to another tourist destination. DMZ simply means ‘Demilitarized Zone,’ which is considered one of the most heavily armed borders in the world. When I had gone there with the Rotary friends in 1989, I was thoroughly disappointed. Our coach was driven up a small hill on a narrow road with forest cover and gun-totting army men in their uniform were seen standing guard on either side of the road. The coach stopped at a point and the Guide was on a hyperbolic monologue giving the impression that a war would break out even as our coach was driving back to our hotel.

READ ALSO  A Dialogue with a Mandya Man

For once, I visualised our army deployment in Kashmir, Sikkim (Nathu La Pass) and Arunachal Pradesh to be of greater interest for a tourist (if allowed) than the one I saw at the DMZ. Hats off to the officials of the Tourism Department of South Korea.

Now, let me turn the clock to the present. This time there were, well-laid, four-lane roads  and a parking-lot from where you climb the gradient to reach the peak of the hillock. Here a building is constructed which is a ‘View Point’ with a few binoculars. There is also a small museum, well-appointed toilets and a rest place. There was also a dispensing machine of packed food items and beverages. Tourists look across the North Korean border area where you see some trucks and vehicles parked or moving in the thin forest of almost a deserted area. It was a case of the well-known phrase in english language, “making a mountain out of a mole hill” and this could not have been more axiomatic. I was left wondering how an otherwise prosaic place — boring and unimportant for a tourist — is made a must-see tourist destination. The next important destination for a tourist is the gigantic vertical metropolis, the Lotte World Tower with 123 floors with a height of 555 mts. The day was over.