Home » Columns » The Showman and his Trump Card 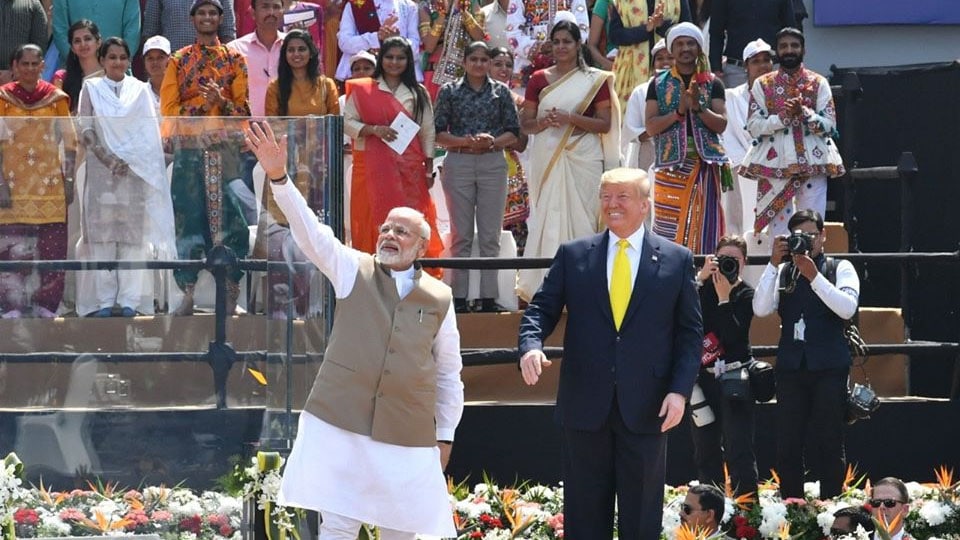 The Showman and his Trump Card

The Greatest Show on Earth made by Cecil B. DeMille 58 years ago was imaginary, meant to entertain filmgoers.  The Greatest Show on Earth 2020 staged by Narendra Modi last week was real, meant to impress one man. It was clear that Donald Trump had never seen such an extravaganza in his eventful life.  He was so overwhelmed that in Gandhiji’s Sabarmati Ashram he ignored the Mahatma and recorded, in the visitors’ book, his appreciation for “my great friend Prime Minister Modi.”

(Those who paid attention to the lines Trump scribbled in the book would have noticed the peculiarity of his handwriting.  He writes in a mix of capital and lower-case letters. The spacing between words and between lines goes irrational in unexpected ways.  When he writes T the crossbar on top goes wild, affecting neighbouring words and lines. Overall the handwriting suggests a man unfamiliar with putting pen to paper.)

Now that the hurly burly is done and the battle is lost or won, the question props up: What was it all about? Presidents and Prime Ministers go on State visits all the time.  But no country ignores its national priorities to focus wholly on the glorification of a visiting VIP. India turned the Trump visit into a national festival. This was all the more anomalistic because, in the midst of the festivities, Delhi exploded in communal violence.  For three days the Prime Minister showed no sign of being aware of it. Nothing was heard from the Home Minister either, perhaps because he, too, was celebrating Trump. And religion went on a mad killing spree.

Preparations for the “celebration” were typically lopsided. The first thing the authorities did was to erect a wall that would hide the slums of Ahmedabad.  It was a revelation to many that Ahmedabad had so many slums despite 12 years of rule by the dynamic Chief Minister Shri Modiji. TV cameras revealed the heartless side of this VIP culture.  Bulldozers wrecked pushcarts laden with vegetables, destroying the livelihood of poor citizens. Couldn’t they have been helped to relocate elsewhere for a few hours?

Everything about the reception to Trump was overstated, overplayed, overdone.  Trump was told that 10 million people would assemble to welcome him. The population of Washington DC is 7 lakh.  In the event, about a lakh plus people were collected from different regions and brought by the Government to Ahmedabad to fill the stadium.  They all wore State-supplied white caps, indicating the official role in organising them.

The State Government shared with the BJP’s Gujarat unit the responsibility to fill the roadsides with crowds for the much publicised road show from the airport to the Motera Stadium.  The State’s loyal Chief Minister Vijay Rupani said “entire Gujarat speaks in one voice, Namaste Trump!” But the road show turned out to be a damp squib. There were only a few knots of people in a few places. What replaced the people was the unwieldy, unnecessarily large security squads and their vehicles.

With Trump’s own imported army and trademark vehicles adding to the Indian contingents, there were more uniformed personnel than lay people throughout the visit.

The effort to showcase “Indian culture” to these visiting dignitaries was another sad spectacle. Scores of dancers and musicians were made to line up when the dignitary deplaned and walked towards his car. He had time only to show a smile of courtesy lasting a few seconds. For that, in Agra for example, 250 artistes performed near the Trump aircraft.  Along the route to the Taj, 3,000 artistes stood at 21 designated points presenting Brij, Awadh and other local dance forms. These artistes would have rehearsed for long to perform as the VIPs drove past. Through the tinted security windows of the limousines the VIPs may or may not have caught a glimpse of the dancers. What a meaningless routine.

READ ALSO  The age of darkness is upon us

Trump spent a total of three hours in Ahmedabad. For that the Gujarat Government spent Rs. 85 crore.  What was it all about? A kind of answer is: Politics. Gujaratis form a big chunk of Indian American Population. Traditionally supporters of the Democratic Party, they have been feeling Modi’s pressure to turn into Republicans.  Remember his Houston slogan: Abki baar Trump Sarkar. Trump has political interest in the Modi bonhomie. Modi’s interest is less political. He is driven by his magnificent obsession with drama and spectacle. Modi is fundamentally a showman.  The Trump visit was one more occasion for him to play his trump card and put on a show no one would forget.