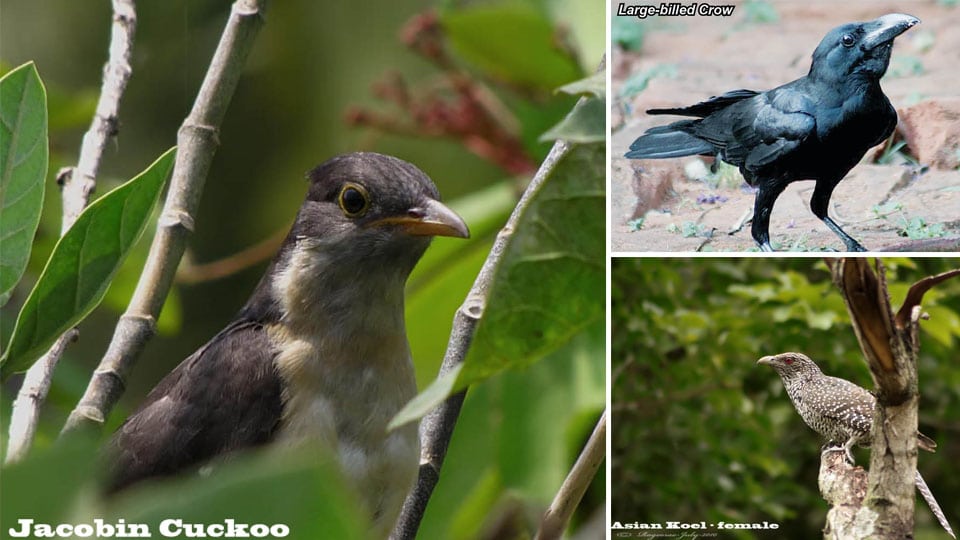 Bird-brained. Calling someone bird-brained is an insult as it refers to the person as a dunce or a dimwit. The size of the brain of birds is likened to the brains of a dimwit. This might have been true until now as we were ignorant of the capabilities of small-brained birds.

Recent research on intricacies of a bird’s behaviour shows complex capabilities. It is discovered that brain size and capabilities are not decisive but the way the brain is developed, the complexity of its formation and functioning is more decisive — a Nano-technology by nature.

It has been proven that birds are capable of putting their mental faculties to application that demand more than the nature-programmed activities, defying the size of brain concept.

All these tests have qualified the humble House Crow (Corvus splendens) and the Darker Coloured Large-billed Crow (Corvus macrorhyncus) as more intelligent than many birds. Both these species are hangers on to human habitation and we come across them every day in our yards. They are called the “Einsteins” among birds. They can solve problems, open a latched door, they can untie a knot, they can plan a strategy to get at something and the latest observations reveal the crows as “tool-users” too.

The same intelligent crows, with mental abilities far superior to other birds, get easily fooled by simpleton among birds — the Cuckoos. Cuckoos are supposed to be eccentric and birds with lower IQs. When a person acts Quixotic or abnormal, he is known to have ‘Gone Cuckoo’. This Cuckoo and its entire clan of birds are called the ‘Cuculids’ from the family of Cuculidae — the supposed dumb and crazy birds. In fact, these are really cunning and crafty birds. They can easily fool and trick other birds into doing what they were supposed to do.

The Cuculids are fun-loving and irresponsible. They have all the fun in life and when the fun ends after having offspring. In this case, eggs. They shirk all responsibilities and trick other birds to do their task of hatching the eggs and also raising their young. This behaviour or trickery of the Cuculids is called “Brood Parasitism “in Ornithology. 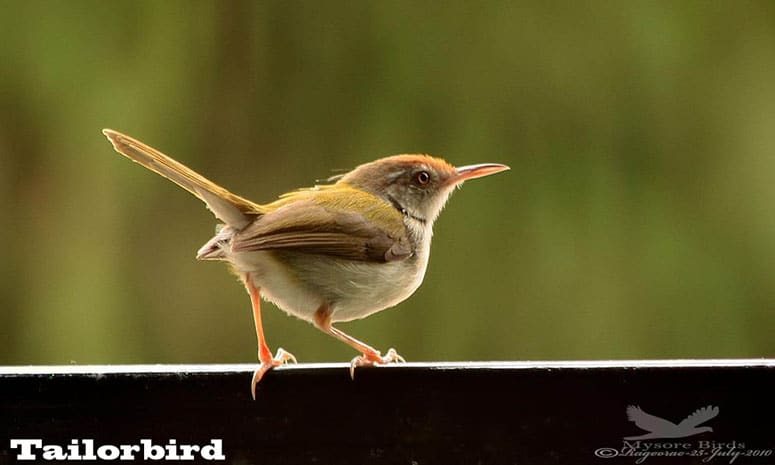 Barring one member of the family – the Crow Pheasant also known as Coucals – Centropus sinensis, called “Kembootha” in Kannada, the familiar crow-like black birds with rust-coloured wings and red eyes, scuttling among the shrubs in your garden with their familiar deep resonating “Oomph…. Ooomph” calls, all other Cuculids are Brood Parasites. From the tiny Tailor Bird to the large Grey Babblers — all are game for the Cuckoos. 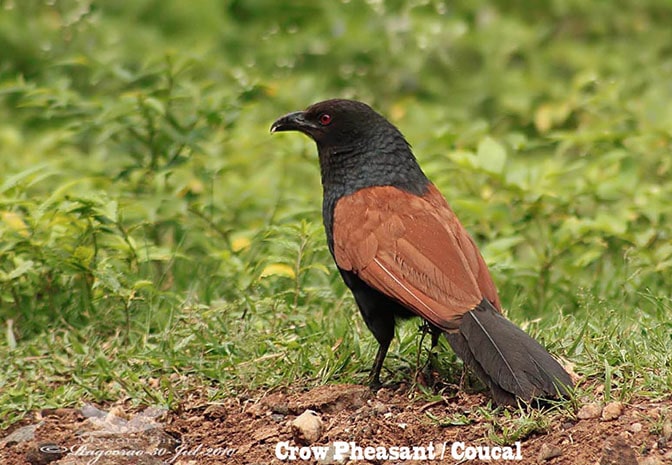 The most familiar of this Brood Parasitic birds in urban locales are the Asian Koels — Eudynamis scolopaceus, fondly and admiringly called as “Kogile” in Kannada. The shiny black males with red eyes and green beaks the females light brown with black-barred body, are the skulking birds that fool the crows into doing their parental jobs. 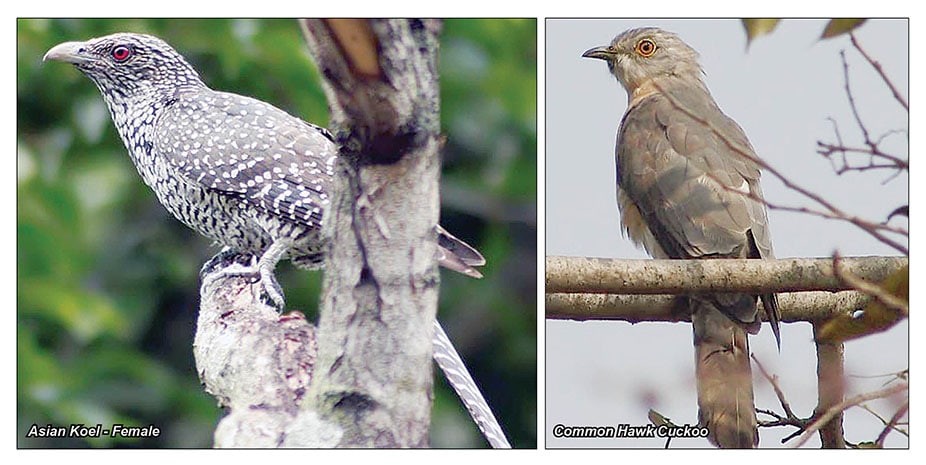 Spring is the time for Koels. Their calls herald the arrival of spring “Chaithra” season. The beautifully resonating shrill calls in the canopy of trees have been an Inspiration for many poets and singers. There is a myth in South India that the Kogile is searching its lost aunt and keeps calling “Chikkavva… Chikkavva …” while in fact, spring  being the mating time, this side of the Deccan region, for the Koels, the males are calling to claim territory and mating rights.

They hold a territory claim in a place that is strategically close to a nest-building crow couple that also nest in spring. In fact, the Cuculids are so flexible in their breeding time that it coincides with the selected host’s breeding season. In urban areas, House Crow and the Large-billed Crow are their hosts. In many other countryside regions, birds like Babblers, fondly called as “Seven Sisters” in Kannada “Saath Behen” in Hindi speaking areas are parasitised. In Deccan region, the Small Tailor bird is parasitised by another member of Cuckoo family — the Plaintive Cuckoo — Cacomantis Passerinus, aka the Grey-bellied Cuckoo. 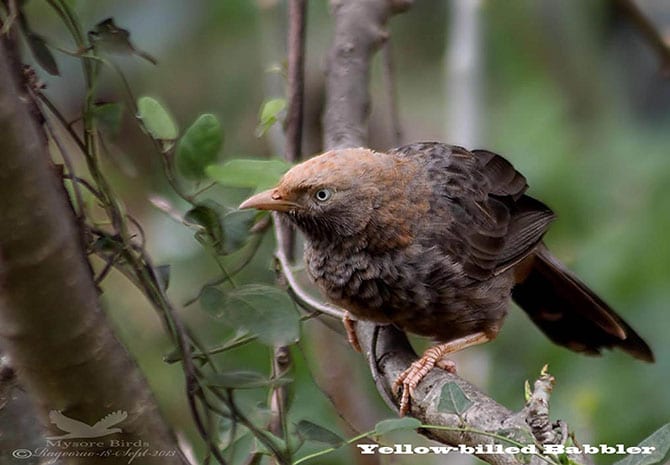 Asian Koels, in their breeding season in March-April, are the most active. Males conquer territories and look for freelancer females to mate. Males select a territory close to a Crow’s nesting tree and keep a watch on them. The Crows build a nest, twig-by-twig, collected from the nearby areas and a platform nest is created. The Crows, which bond in pairs for life, sometimes even repair the old nest from the last season.

This activity is keenly watched by the male Koels. Once the nest is finished with feather and grass lining, the Crows begin to mate and would lay their first light green coloured, brownish blotched egg within a few days of mating. The Koels sense this and a strategy is worked out between the mated male and female Koels. 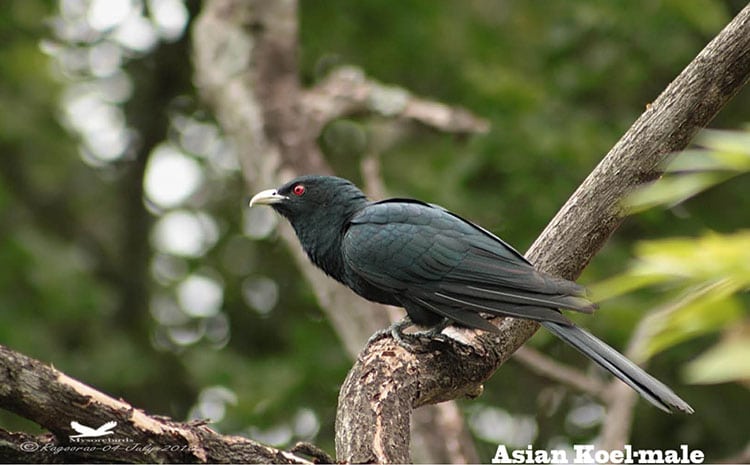 After laying its first egg, the female, along with the male, stays in the nest to incubate, periodically flying for short trips to feed on whatever is available close by until the second egg is also laid in a couple of days and then totally stay in the nest to incubate the eggs for 18 days. This is the time, after the first egg is laid and before the second egg is laid, the Koels wait, to fool.

The male Koel makes a mock attack on the Crow’s nest. The Crows take this seriously and try to drive away the Koel, which deliberately leads the Crow away from the tree with screaming calls, which we hear in our surroundings. The female Koel is watching all this from a close by branch in the same tree.

The male Koel makes more mock attacks and the Crows are really annoyed. The nesting pair is serious and they chase the male Koel as far away as possible and come back to the nest. This unguarded moment was what the female Koel was waiting for and she makes dash to the Crow’s nest and lays one egg in such hurry that it would sound impossible to lay an egg in that short time. It later drops the crow’s egg to the ground.

READ ALSO  Proud... as a Peacock

In fact, it has been observed and proven the quickness of laying an egg in Cuculids. The normal time taken for many birds to lay an egg is anywhere between 1.5 minutes to 4 minutes. The Cuculids, the master deceptors, have mastered this art of quick-laying also.

Nature has endowed the Brood Parasites the ability to lay an egg within 4 to 5 seconds. The Cuckoos have also evolved into distortionists. They can twist and turn their body to such suitable positions that will enable them to deposit their egg into very small nests like the Tailorbird’s and Warbler’s.

The Koels, having dumped their responsibility on to the unsuspecting Crows, go away as though nothing has happened. The Crows come back and strangely they do not find anything abnormal. The female just sits on Koel’s egg which looks exactly like her egg in size, colour and shape. 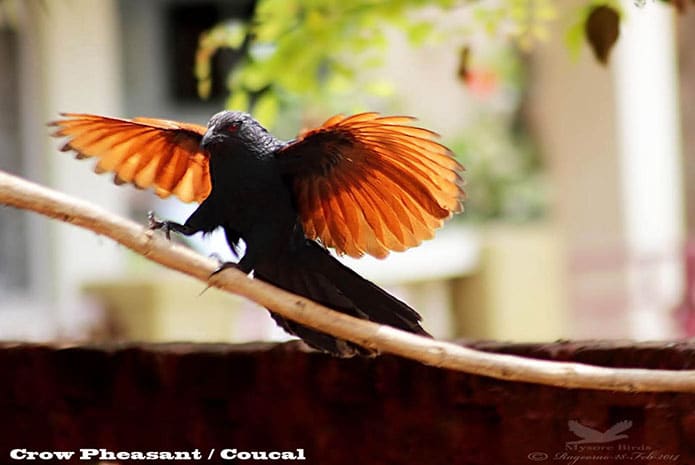 The Crows, the Super Intelligent Birds, surprisingly do not suspect the other egg in her nest. One who could use a tool could not even count! The fooled Crow lays another egg of her own in a few days and the incubation starts. A little later than a fortnight, the Koel egg hatches first while the Crow’s own eggs will take 3 to 4 days more. Nature has programmed the Brood Parasites eggs also to hatch before the host’s eggs do.

The Crows, after the Koels chick is hatched, start feeding the chick that is voracious and the Crows meet the demand. The Koel chick, being constantly fed by the Crows, grows fast and fat, having the advantage of being the lone child to be fed. Then finally the Crow’s eggs hatch. The Crows have a full family to feed and they are ever busy finding morsels of food for the chicks.

The Crows work hard and the Koel chick grows fast and aggressive. Within a few days the Koel chick is so aggressive that it pushes the Crow’s chick out of the nest to become prey for other birds. The Koel chick, the parasitic child of the Crows, grows up happily and fast getting all the attention and food from the poor Crows.

Once the Koel chick is ready to leave the nest, it turns into a glutton and hangs on persistently to the foster parents Crows, following them wherever they go and keep begging for food. This goes on till it can feed itself. Later it joins the band of Cuckoos. It forgets all about the foster parents until the day comes when the young Koel locates a Crow’s nest itself to keep the cycle of parasites and hosts going.

This Cycle of the ‘Dumb’ Cuckoos, fooling the ‘Smart’ Crows goes on forever. Actually here no one is ‘Dumb’ and no one is ‘Smart’.

Birds Crows Cuckoos Ragoo Rao
By 2020, 90% of people living with HIV will know their status
Nine injured in accident