Birds and Butterflies of Mysuru: Weaver Bird’s world, a philandering father and a devoted mother…

Habitat destruction is forcing these beautiful birds, the architects of Nature, to dwindle in their numbers. Their nests are brought down and sold by many vandals as decorative articles to be hung at homes. This destruction is continuing unabated as there is a market to sell them. So the next time if someone sells you a Weaver Bird’s nest, please say NO. Otherwise, a day may not be too far when these intricately-woven nests may become rare and end up being seen only in natural history museums.

Summer rains in Mysuru bring in a lot of activity in farming. The season of plenty makes some bird species to breed. Fresh crops with nutritious seeds and plenty of insect population make the breeding season well-planned and timed.

Birds are efficient nest-builders and the most intricate nests are woven by Weaver Birds. With more than 40 species of weaver birds in the Tropics, India has four species and Namma Mysuru has two species. These are the Baya Weaver (Ploceus Philippinus) and Streaked Weaver (Ploceus Manyar).

A nest is a nursery to the birds, to lay eggs and raise the young. It is neither a home to the birds nor is it a shelter against weather. Both these species start building nests in this season and it is a sight to watch males weaving a nest, enticing females to approve and then raise a family. 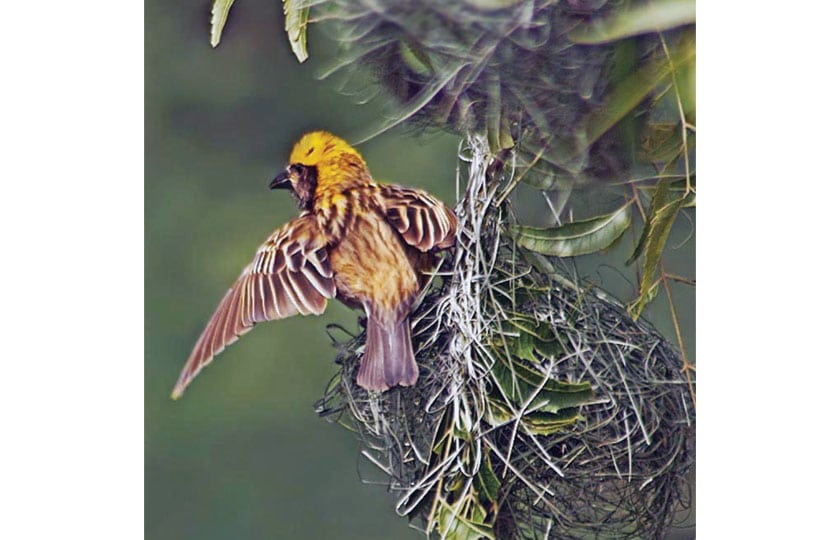 Of all the nests built by birds, some are very intricate, woven with architectural precision. This habit of weaving a nest with grass blades has given the entire species, their name — the Weaver Birds.

Mysuru’s weaver bird species Baya Weaver and the Streaked Weaver weave a pendulous bottle-shaped nest from dry grass blades. These birds are called “Geejaga” in Kannada and their nests are called “Geejagana Goodu” with plenty of myths woven around them in folklore.

Come April-May, with the first summer showers, the Baya and Streaked Weavers go to a nest-building frenzy. The males are the ones that build a nest. Selection of nesting site is done cautiously and trees beside culverts and canals are preferred. 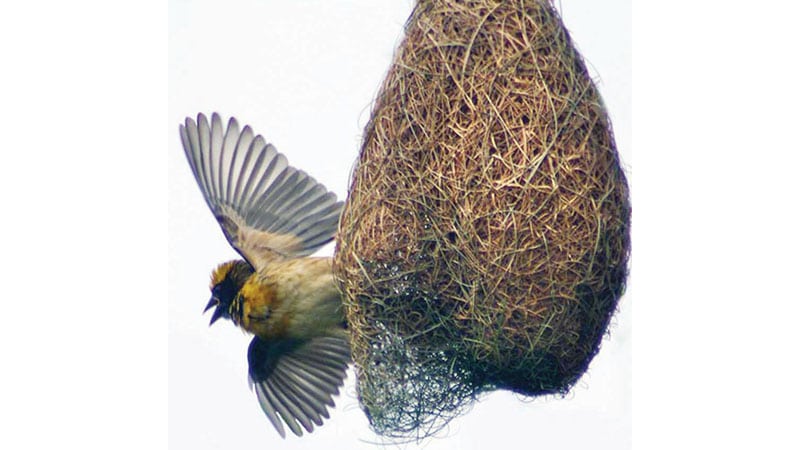 The thin overhanging branches, usually on thorny trees like Acacia, Indian Date Tree are selected by Baya bird and lakeside reed beds are selected by the Streaked weavers. The sites turn into nesting colonies with several birds weaving a nest on the same tree. There are several colonies inside Mysuru surroundings like Bogadi Lake area in Vijayanagar, Hebbal Lake area in Hebbal, Lingambudhi Lake and Karanji Lake.

It is very interesting to watch frenzied males weaving a nest and trying to attract females with their constant high-pitched calls, perched on their unfinished nests. The females keep a watch on the activity and will visit a prospective nest and inspect it. If she finds it to her satisfaction and finds the weaving skills up to the mark, she will enter the nest and then perch alongside the male. 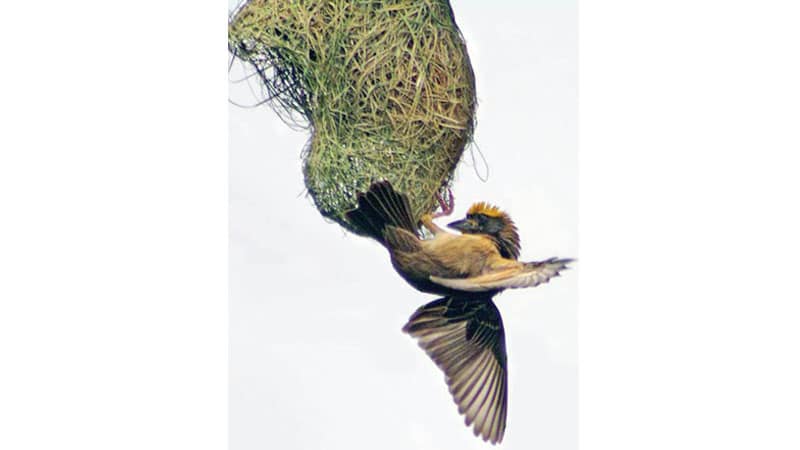 This is her way of approval. If selected, a male rejoices and goes about completing the weaving work till the nest has taken its final shape with all amenities like a downward facing long tunnel-like entrance, a comfortable chamber for eggs and space for chick raising. All the while, after the selection of the nest, the female stays with the male. Eventually she lays 2-4 pure white eggs in the egg chamber and starts incubation.

Meanwhile, our friend, the frenzied male Baya weaver, the philanderer he is, leaves the female to her fate and flies away to build another nest and entice another female. Build a nest, entice a female, get her approval, complete the nest, put her in the family way and go looking for other females — the male bird practices this cycle till the breeding season lasts. In the process, a male bird builds 5-10 nests and loses track of how many females he has impregnated.

Our lady Baya, a devoted mother, incubates the eggs, raises the chicks and teaches them the skills of survival without her partner’s help. Males of a season, who have not been accepted as mates abandon the nests and stop weaving any further. Such abandoned nests are taken over by other species of birds like Indian Silver Bill- Euodicemalabarica, White-rumped Munia – Lonchurastriata, Great Tit – Parus Major and some nests are occupied by field mice also.

This is the world of weaver birds. Habitat destruction is forcing these beautiful birds, the architects of Nature, to dwindle in their numbers. Their nests are brought down and sold by many vandals as decorative articles to be hung at homes. This destruction is continuing unabated as there is a market to sell them. So the next time if someone sells you a Weaver Bird’s nest, please say NO. Otherwise, a day may not be too far when these intricately-woven nests may become rare and end up being seen only in natural  history museums.