Home » Feature Articles » Once in a Blue Moon 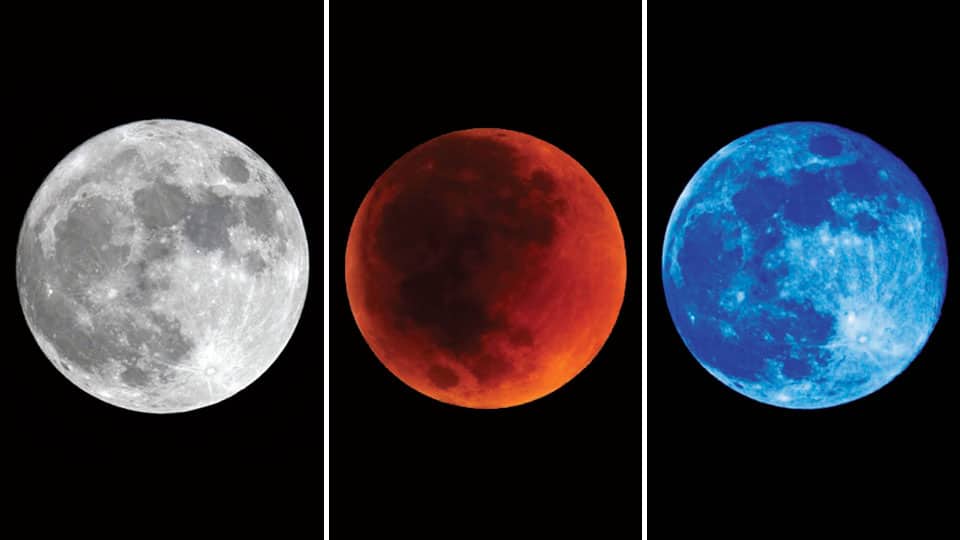 Once in a Blue Moon

Sky-watchers will get a rare treat on Jan. 31: A Super Moon, a Blood Moon, a Blue Moon and a total lunar eclipse. A Super Moon eventuates when the Full Moon is at the closest point of its orbit to the Earth, which is also called the perigee. That makes the moon look extra close and extra bright — up to 14% bigger and 30% brighter than a Full Moon at its farthest point from Earth, known as the apogee. This Weekend Star Supplement gives our readers an insight into this rare astronomical feat that, after Jan. 31, 2018, will occur only on Dec. 31, 2028.

While it is common for all of us to have witnessed a regular lunar eclipse, the night of Jan. 31 (Wednesday) promises to be an absolutely exciting and enjoyable lunar eclipse as it will be unique, momentous and mesmerising. For, on that night, one can experience watching a Super Moon, Blood Moon and a Blue Moon total lunar eclipse – a very rare astronomical feast. 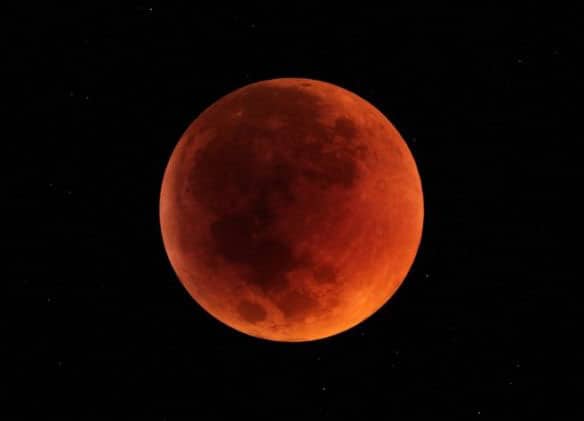 Normally in a month, one can see the biggest moon followed by two full moons. On January 31, Indians are really privileged to witness a super blue moon total lunar eclipse. The eclipse will be visible in the region covering Middle East, Asia, Indonesia, Europe, Australia, New Zealand, North and South America, Northeast Africa, Antarctica, Pacific Ocean, and Hawaiian Islands. It is visible from all parts of India. This rare feat is happening after 150 years. It last happened on March 31, 1866.

In simple words, lunar eclipse is the passage of the Moon through Earth’s shadow. Lunar eclipses, which may be total or partial, can occur only during full moon when Sun, Earth and Moon are in one line. As the Sun is an extended light source, Earth’s shadow has two components – a dark, central UMBRA, where the Sun is completely obscured and a lighter outer PENUMBRA, within which the obscuration is partial. 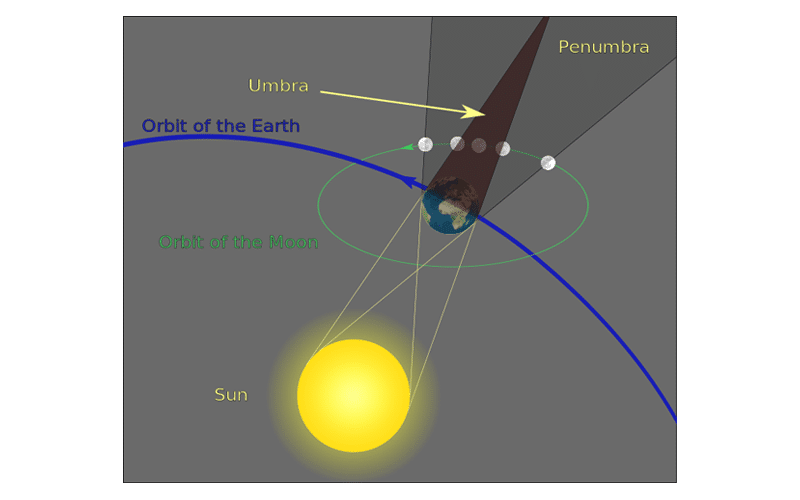 During a lunar eclipse, the Moon passes first through the penumbra, taking about an hour, moving eastward by its own diameter in this time to reach the western edge of the umbra. During the penumbral phase, the light of the full moon is only slightly reduced.

A lunar eclipse occurs when the Moon passes through the umbral region of the Earth’s shadow and becomes imperceptible.

Lunar eclipse is discernible from a large part of the Earth. Lunar eclipses usually precede or follow solar eclipses by a fortnight. During a total eclipse of the Moon, the range of shading and the intensity of colour vary enormously.

Lunar eclipses also have the advantage of being visible from the entire hemisphere of the Earth where the Moon is above the horizon, rather than being most impressive along a narrow track. The main difference from one event to another is the degree to which the totally eclipsed Moon is darkened and how colourful is might be.

The duration of the total lunar eclipse visible on January 31 is 3 hours and 18 minutes. The moon enters the Penumbra at 4:21pm. By analysing the penumbral phase, the total eclipse will commence at 6:21pm and terminates by 7:37pm. It also leaves the Penumbra at 9:38 pm. The greatest phase of the eclipse will eventuate at 6:59 pm. 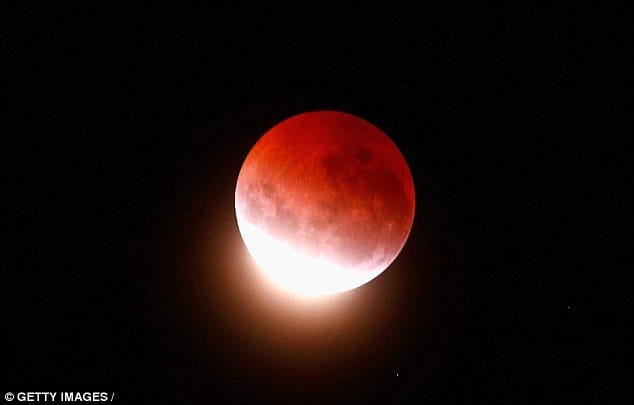 Following first contact, the Moon’s more easterly limb will show a growing dark “nick” as it begins to enter the umbra more deeply. At a total lunar eclipse, Moon takes about an hour to become completely immersed in the umbra.

To begin with, there is little to see beyond a darkening of part of the Moon. But as the eclipsed portion increases, some colour may become evident. The curved edge of the umbra may show a slight blue fringe. Refraction of sunlight – particularly at the red end of the spectrum – through Earth’s atmosphere means that the umbra is not completely dark. Consequently, the Moon does not usually disappear from view. Instead, it is dimmed and often takes on a reddish colour which becomes increasingly apparent as the umbral phase advances.

The diameter of Earth’s umbra is thought by some to change in response to solar activity, perhaps decreasing at solar maximum as the upper atmosphere becomes slightly more extended in response to increased ultraviolet and X-ray emissions. Many observers try to measure the precise extent of the umbra during eclipses by timing the passage of its edge across identifiable lunar features such as craters.

Unless a lunar eclipse is very dark, it is usually quite easy to make out the dark Maria, contrasting with the brighter, cratered highlands, with the naked eye. At totality, the Moon – completely immersed in shadow – normally shows red, orange and yellow colours, often with some gradation.

Those parts of the Moon closer to the edge of the umbra often appear somewhat brighter and more yellowish than those towards the centre, which are redder. Sunlight, diffusing through the Earth’s atmosphere, bathes the Moon in a dull glow that reduces it to about one ten-thousandth the normal brightness of the full Moon. The same principle causes the early-evening sky to remain relatively bright even though the Sun is below the horizon.

The shadow’s darkness varies with the amount of cloud, dust and pollution that is suspended in the Earth’s atmosphere at the time of the eclipse. Occasionally, the obscuration is sufficiently dense to make the Moon disappear, while at other times, the shadow imparts only a pale rusty hue to the Moon.

There is absolutely no harm in witnessing this gorgeous astronomical spectacle and could be clearly witnessed by using a reflecting telescope or astral binoculars. The duration of totality in a lunar eclipse depends on how nearly centrally the Moon passes through the umbra. A central passage gives a maximum of 1 hour and 47 minutes. During totality, any lighter border on the Moon will appear to move gradually round from the westerly to the easterly limb. The totality ends when the Moon’s easterly limb re-emerges into sunlight and over the next hour or so, the full moon exits the umbra to regain its usual brilliance, thereafter clearing the penumbra. 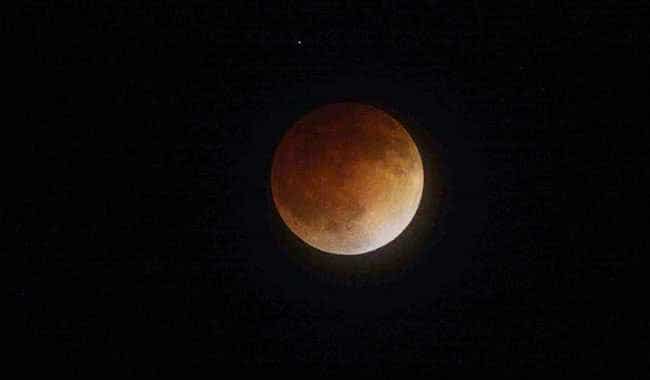 Large telescopes or high magnifications are of little value for observing a lunar eclipse. It is always recommended using binoculars or a small low-power telescope since they both allow the entire Moon to be viewed during the event.

Details of Total Eclipse of Moon (in Indian Standard Time) 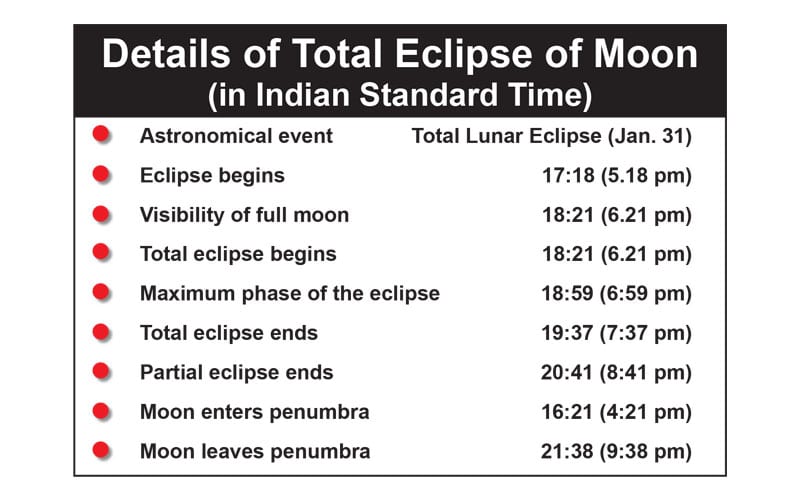