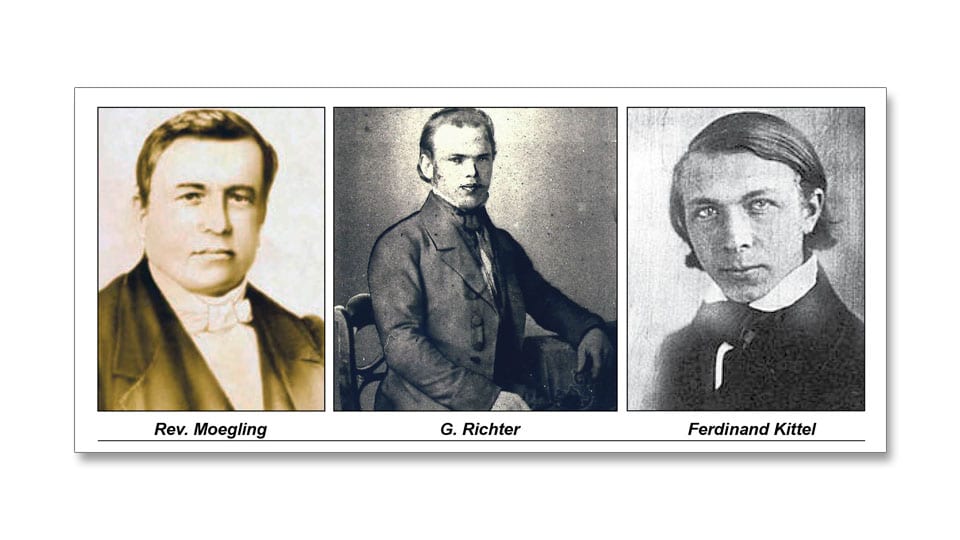 The Three Germans in Coorg

It was in 1836 that twenty-five-year-old Rev. Hermann Moegling, a German missionary from the Basel Mission, arrived in Mangalore. Christianity was already popular on the west coast of India. He founded the Basel Evangelical Mission Seminary, which became a hub of learning of not only religion but also Indian languages and culture.

Moegling, a linguist, was fluent in English, Sanskrit and Persian, besides his native German. He started learning Kannada and soon became proficient in the language. The credit for starting the first newspaper in Kannada “Mangaluru Samachara”  goes to Rev. Moegling. The maiden issue of this newspaper was brought out on 1st July 1843. This eventful day is still being aptly celebrated as ‘Kannada Press Day.’ Rev. Moegling went on to translate several Kannada classics to German and vice-versa. Basel Evangelical Mission Seminary started by him in Mangalore continues under the new name  Karnataka Theological College. Rev. Moegling laid the foundation for Mangalore becoming a centre for education.

In 1852, Rev. Moegling was preparing to leave for Germany for medical treatment when he had an unexpected visitor from Coorg — a man named Alamanda Somayya. The tall, impressive looking man was dressed as a sanyasi. He requested Rev. Moegling to accept him into the Christian fold. He offered his land in Coorg for construction of a church. Rev. Moegling was quite taken up with Somayya’s resolve.

Believing this to be a divine intervention, Rev. Moegling cancelled his trip. He moved to Coorg in 1853 along with his wife and adopted spiritual son Rev. Anandarao Kaundinya. Alamanda Somayya was baptised on 6th January 1853 and was christened Stephanas Somayya.  Rev. Moegling built a house and a modest church on Somayya’s land in Armeri village.

Lt. Col. Mark Cubbon was the Chief Commissioner of Coorg at the time, and he encouraged Rev. Moegling to establish the first Protestant church and a school in Madikeri in 1855. Another notable personality in the field of education in Coorg was Rev. Georg Richter, also from the Basel Mission in Germany.  He was brought to Coorg by Rev. Moegling in April 1856 and was given charge of running the school. Rev. Richter spent most of his life in promoting education in Coorg and was the first Principal of Central School in Madikeri, which was started in 1869. He later took charge as Inspector of Schools. His book, “Gazetteer of Coorg”  published in 1870 is a comprehensive recording of social, cultural, historical and geographical aspects of Coorg. Rev. Richter’s wife, Armella, taught needlework to Coorg girls.

READ ALSO  An Elementary Grammar of the Coorg Language

In a recent book by Albert Frenz (Stuttgart), titled  “Georg Richter: His Work in Kodagu on the Basis of Official Reports” gives us an insight into Rev. Richter’s journey to India, and how he landed in Coorg and spent 38 years here except for an 18-month furlough in Germany.

The British administration granted 97 acres of land in Siddapur to Rev. Moegling to establish a church and to support a Christian settlement with a coffee estate.  The work on this ambitious project started in 1857. Even though Rev. Moegling had his hands full with preaching the Gospel and opening the coffee plantation, he found time to author two books on Coorg.  One in German, “Das Kurgland” details his evangelical work in Coorg. The other, written in English, titled “Coorg Memoirs” is one of the first in-depth study of history of Coorg.

Rev. Anandarao Kaundinya ably assisted his mentor. The new settlement was named Anandapura or ‘region of happiness.’  Rev. Moegling found Coorg to be an ideal place to live and called it his second country. In 1860, Rev. Moegling left for Germany to be with his ailing wife. He himself was in poor health. To his great disappointment, his illness did not permit him to return to Coorg. He died in 1881.

The work at Anandapura continued under Rev. Moegling’s disciple and another fellow German missionary Rev. Ferdinand Kittel. An Indologist and a polyglot, Rev. Kittel first came to India in 1853 and in time became a renowned scholar in Kannada.  He too translated some of Kannada classics to German and wrote several books and poems in Kannada.

His most famous work is the first Kannada-English dictionary consisting of 70,000 words which he painstakingly compiled and published in 1894. It was while in Coorg that he started perfecting his proficiency in Kannada. He continued Rev. Moegling’s initiative in the field of education. Rev. Kittel also wrote a book on Kannada grammar. He was a regular contributor to Mangaluru Samachara. His work took him, besides Mangalore, to Dharwad as well. In recognition of his contribution to Kannada, an impressive statue of Rev. Kittel stands prominently on M.G. Road, Bangalore. Further, a Kittel Science College and a Kittel Arts College, have been established in Dharwad. There is talk of starting a University in Rev. Kittel’s name.  That would be a fitting tribute to this great champion of Kannada.

One of the major hurdles faced at the Anandapura settlement was malaria, which the Europeans referred to as the ‘Coorg Fever.’  There were many deaths and gradually this scourge affected the project adversely. Anandapura coffee estate was subsequently taken-over by British planters who had shifted to Coorg from Sri Lanka. The coffee estate grew in extent and is now a part of Tata Coffee Limited. It still retains the name: Anandapura Estate.

These three Germans were pioneers in promoting education in Coorg. However, their hope of making Kodavas embrace Christianity did not find favour beyond Somayya and his family. Reproduced is a rare photograph of Alamanda Somayya’s son Gabriel and daughter Hanna, taken by Rev. Richter in 1862.

About the author: C. P. Belliappa, born in 1946, is a Chemical Engineer. He is currently settled in Coorg.  He is known for his writings on issues pertaining to Coorg. Four of his books — Tale of A Tiger’s Tail & other Yarns from Coorg, Nuggets from Coorg History, Victoria Gowramma: The Lost Princess of Coorg, and Tongue of the Slip, have been published by Rupa Publications.