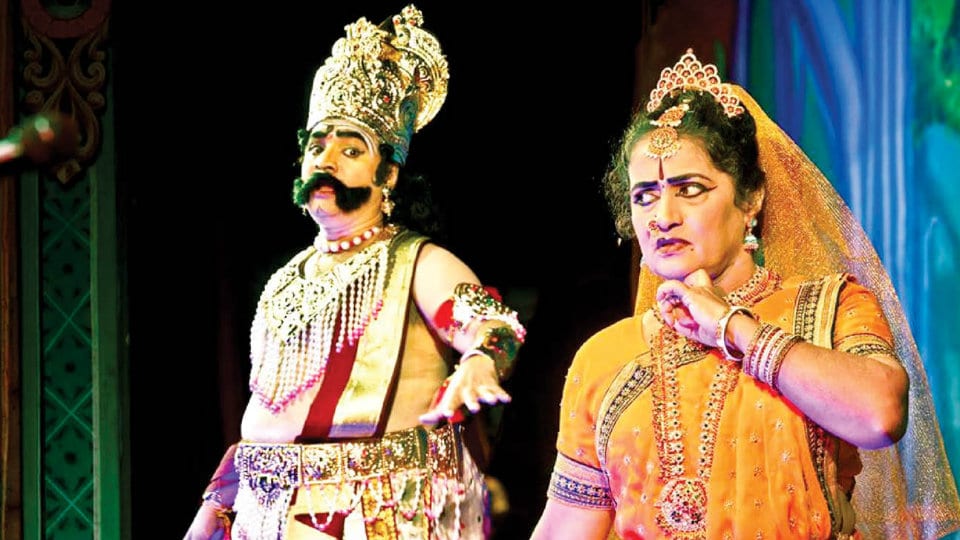 Both the shows of Manmatha Vijaya, the running weekend play at Rangayana, was welcomed by the audience to houseful shows; not only were the usual seats occupied, the plastic chairs — like metal ones in real ‘companies’ — were put up for the sea of enthusiasts who kept coming. Manmatha Vijaya is a company nataka by all means, and Rangayana’s production treats it so with unfailing fidelity. The age-old play, composed by Giribhatta Thammayya, is directed by noted musician and theatre-director of the Gubbi fame, Y. M. Puttannayya.

The takeaways from the nataka are many: an unveiling of the company style to youngsters, and reminiscences to the old. As far as I gathered, not a single line from the lyrics or the dialogues was edited, thus running the saga for three hours and fifteen minutes.

The entire stage is decorated with boards and screens that resemble the makeshift-stage companies would build, with Rangayana’s logo proudly in the centre. The serial lights flicker, and the show begins with an invocation to the Lord. Add to that the effect of the samrani: we are truly transported to company camps. What catch the eyes are the five breathtaking screens designed by H.K. Dwarkanath, functioning as backdrops to the scenes taking place in front: a two-dimension enriching the three-dimension. One spectacular screen is that of a monster’s face, the setting to both Tarakasura and Shamburasura: painted in impactful colours, that face is sometimes more frightening than the two asuras themselves.

The music is another plus. Having worked in company natakas himself, Puttannayya dons the important hat, playing the leg harmonium, and is supported by a variety of instruments, modern additions being the drums, rhythm pads and the clarinet. There is laptop music too, supporting the main artistes singing every song with their own voice. Narada (a clever Jagadish Manavarte) praises the Mahadeva (incidentally played by Mahadev) as a samavedasangeetapriya, and true to that, half the play is only music: romance blossoms with duets, asuras literally sing their own praises, heroines lament in tunes. At one point, Puttannayya himself sings pitch-perfect, while Shiva and Parvathi (Pramila Bengre, with a reserved grace) sway and bring little Kumara on stage. The Kumara who then kills Tarakasura (Ramu, with efficient arrogance). The Kumara for whom Manmatha  was sent to ruin Shiva’s ferocious meditation.

That is Manmatha’s first vijaya. His second vijaya happens two yugas later — in dwaparantya, when he, as incarnate Pradyumna kills Shamburasura, and embraces his wife-in-human-form Mayawati (Saroja Hegde, twitching her eyebrows at every emotion), and goes back to living in kamaloka. The entire story is hence, a narration of three yugas! And at several moments, the time does feel. Manmatha’s introduction scene, for example. While it is endearing to see him and his beloved Rathi (Hulgappa  Kattimani, charmingly sportive, and K.R. Nandini, delightfully playful) flirt about with song and dance, fifteen minutes become too much to make the point. Several songs, even later, seem redundant. Yes, it is a faithful company nataka and keeps all songs, but when the tradition evolved with time, why shouldn’t it now? During some songs, the lyrics are even submerged under the voice of the instruments.

Perhaps, one could contemplate on how much of the play is absolutely necessary — without losing the “company charm”, but also without giving the audience moments of monotony.

The second half of the play is a little more amusing: all credits to Prashanth Hiremath in his inimitable role as Shamburasura. He ticks the most important of all company nataka features: making us laugh. His skilful improvisations and guileless tenor is full-time entertainment. Especially the first meet with Mayawati — he utters dialogues with the zest they deserve, and had it been on a company camp, he would have been the recipient of high-pitched whistles.

But when an institution like Rangayana revives an old play, one would expect an addition of nuance, an exploration of thought probably — say, in the imagination of Pradyumna being nursed by who actually is his partner — but this manages only melodious presentations and experienced acting. It informs the mythological tale, and reminds the era of the company natakas. That is a feat indeed.

For that, Manmatha Vijaya must be watched by every theatre enthusiast. It is running at Bhoomigeeta,  Rangayana, on every Sunday at 6.30 pm.