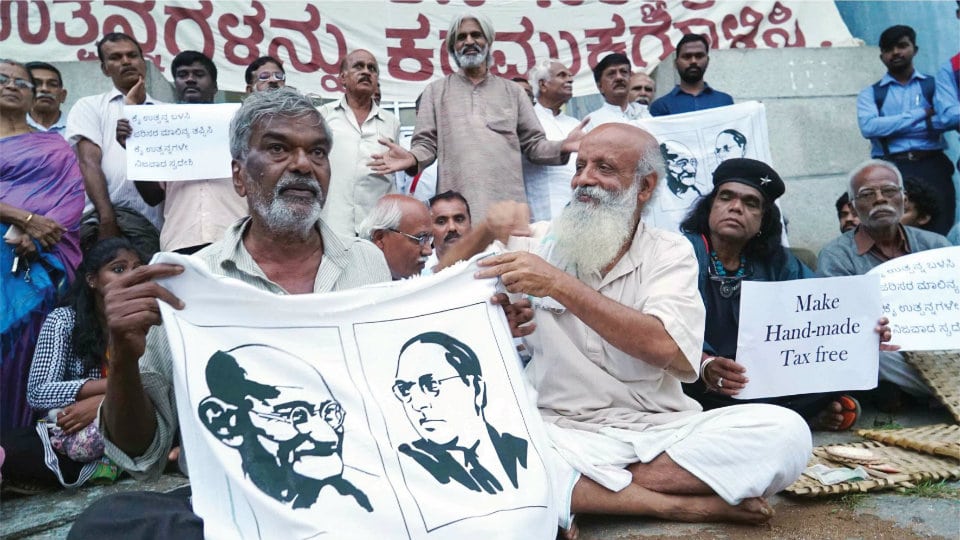 Mysuru: It was a gathering for a different purpose at Kalamandira premises here yesterday.

Many theatre enthusiasts, members of both professional and amateur theatre troupes, writers and progressive thinkers had assembled to take part in the ‘Kara Nirakarana Satyagraha’ launched by renowned theatre personality and former Rangayana Director Prasanna demanding the Central Government to withdraw GST on all handmade products including handloom and handicrafts stating that the new GST policy had made the artists suffer financially.

The protesters demanded that agricultural products, handloom fabrics, ploughs, blankets, baskets, mats, and other handcrafted products be allowed the same benefit as Khadi, which is likely to be exempted from GST.

Speaking to media persons, Prasanna said that he had written to CM Siddharamaiah, former CM B.S. Yeddyurappa and former PM H.D. Deve Gowda seeking a resolution in the Legislative Assembly asking the GST Council to bring all handmade products under the zero tax slab.

He added that several handcrafted producers and Cooperative Societies have suffered immensely after the GST regime came into force in July.

Prasanna launched an indefinite hunger strike today in Bengaluru urging the Government to fulfil their demands.