Home » Columns » Abracadabra By K. B. Ganapathy » Theatre of the Absurd, Karnataka: Arabian Nights of a Sort! 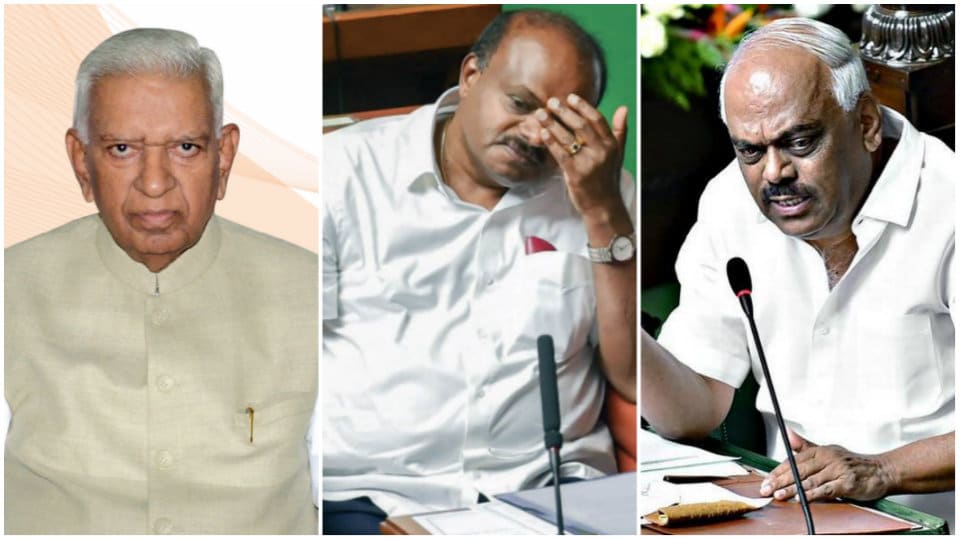 Theatre of the Absurd, Karnataka: Arabian Nights of a Sort!

The confidence motion moved in the Karnataka Assembly yesterday by the Congress-JD(S) coalition’s Chief Minister H.D. Kumaraswamy was expected to have a smooth passage, either way, because its procedures were vetted by the Supreme Court, as we know. Sadly, the proceedings took a turn towards an unprecedented pandemonium with the leading coalition partner Congress raising a point of order on the issue of issuance of whip to its members and the ambiguity perceived about issuing of  whip in the Supreme Court order.

Siddharamaiah, the herdsman of Congress party in Karnataka and the Chairman of the Coalition Co-ordination Committee (Samanvaya Samithi) of the coalition Government, was on his feet, silencing the Chief Minister who was speaking on the confidence motion. And the Speaker, sphinx-like, was condescending to Siddharamaiah. Unfair to the august House and not so much to Kumaraswamy who was in fact affronted. But then, being coalition partner this seemed a drama enacted with prior mutual understanding. And knowing Siddharamaiah’s pace and tenor of speech, nay a drone, he was repeating what Speaker K.R. Ramesh Kumar had spoken in the previous session about the evil of defection, what the great Parliamentarian Madhu Dandavate had spoken about it in the Parliament on the occasion of Mahatma Gandhi’s birth centenary etc.

When the Speaker intervened asking him to speak on the ‘point of order’, Sidddharamaiah plunged into the Constitution… The Supreme Court’s directions etc., ad nauseam… Soon it was clear the intent of the coalition partners was to filibuster and drag on the proceedings to gain a few more days to enable themselves to try and try again, like the legendary Robert Bruce, to get their MLAs now holed-up in a Hotel in Mumbai, back to the fold and save their Government from the imminent collapse.

The BJP was no fool not to see through the game-plan of the coalition partners who seemed to get tacit support from the Speaker. The ruling coalition was seeking postponement of the Trust Vote on the grounds that there were legal ambiguities that needed to be solved — either by going to the Supreme Court or consulting the legal eagle.

Naturally, the Speaker was in a fix. Despite the plea by the BJP for a division of votes to settle the matter, the Speaker adjourns the House.

It was then the helpless BJP went to the Karnataka Governor Vajubhai R. Vala with a SOS. The Governor wrote to the Speaker urging him to conclude the confidence vote by the end of the day. But the letter was treated as advice  (Salahe) and not a direction (Aadesha) and the Governor’s letter was ignored with the Speaker adjourning the House for today, Friday.

Sensing this kind of danger, the BJP once again went to the Governor and this time the Governor seemed to have risen to his full Constitutional height and wrote a definitive letter, not to the Speaker who always took shelter under his Constitutional rights (forgetting the democratic responsibilities under the spirit of the law),  but to the Chief Minister himself (who is appointed at the pleasure of the Governor) directing (Aadesha) him to prove his majority on the floor of the House (not when he, Siddharamaiah or the Speaker wished, for whatever reason) but on or before 1.30 pm today, Friday.

But wait ! All is not lost for the coalition Government. They have their Supreme Court                Advocates capable of keeping the Supreme Court Judges awake through the night and get them to deliver judgement. It had happened in May 2018. As a result, BJP’s Chief Minister B.S. Yeddyurappa had to quit unable to prove his majority in the House. Of course, there was not enough time for Operation Kamala! Let it be.

Is the BJP heading towards happy days again after a wait of one year and two months? GoK. But, unwittingly, signs of that possibility was perceived in the House yesterday when Siddharamaiah, as if by premonition, identified himself as “Leader of the Opposition” which he will be, should the BJP come to power following the Trust Vote.

6 COMMENTS ON THIS POST To “Theatre of the Absurd, Karnataka: Arabian Nights of a Sort!”