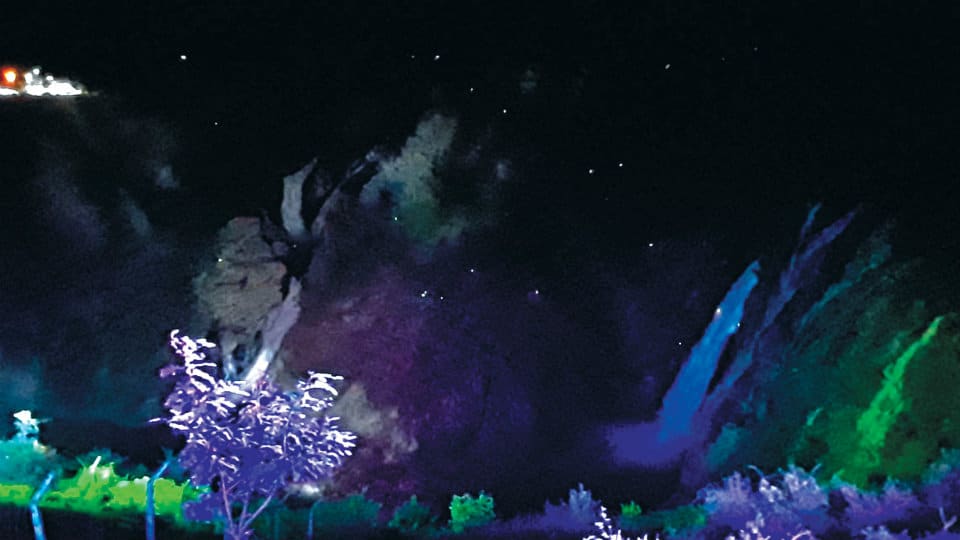 Mandya / Malavalli: In spite of the river getting bone-dry and absence of gushing waterfalls, the two-day Jalapathotsava at Gaganachukki falls began in Malavalli Taluk of Mandya District yesterday.

Thousands of visitors who had thronged to witness gushing waterfalls were surprised to see only a thin strip of water flowing at Gaganachukki Falls. The Gaganachukki Falls goes dry during this part of the year and only comes to life after heavy rainfall during rainy season. What provided some respite to curious visitors were the cultural programmes held on a huge stage, which was colourfully illuminated by gigantic LED lights in the backdrop.

Impressive tableau followed the folk troupes, which depicted various facilities and services offered by Department of Social Welfare, Department of Horticulture, Dept. of Women and Child Welfare, Panchayat Raj, Department of Forest and others.

Heli-Tourism, which had been organised as part of the Jalapathotsava, was inaugurated by DC Dr. Venkatesh and MLA Annadani who took a helicopter ride.

Earlier in the day, the Dept. of Tourism had organised a Kite festival in which kites of bright colours, innovative designs and shapes adored the skies.

As part of the festival, ‘Ahara Mela’ and a ‘Job Mela’ have been organised on both days. Boating will be held in Malavalli Lake. Water sports, helicopter and coracle rides, bike rallies, rangoli competition and exhibitions are also being held to attract visitors.