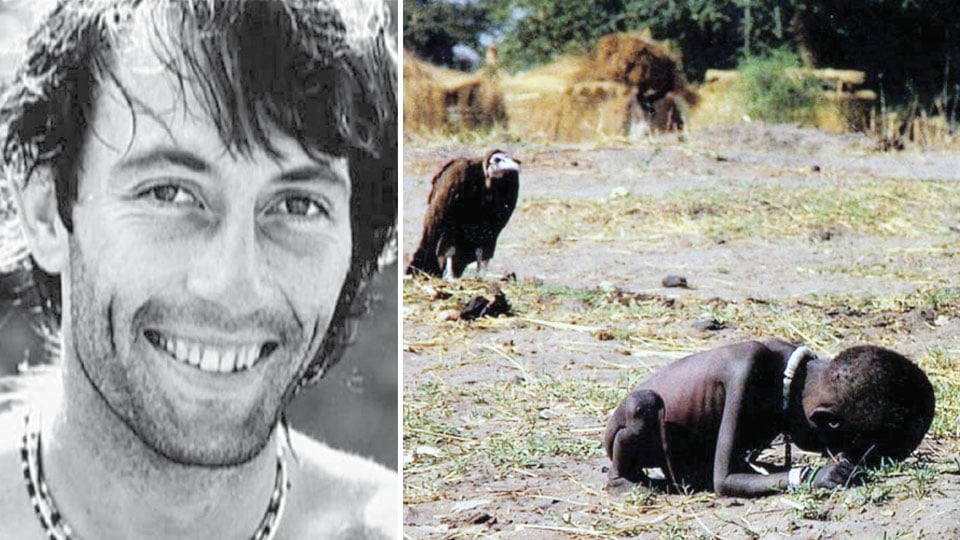 Kevin Carter, a South African photo-journalist, was awarded   the “Pulitzer Prize” for the visual “The Vulture and the Little Girl.”  In the picture, a vulture is  patiently waiting for the death of a hungry little girl. Carter captured the moment in the great 1993 famine in Sudan.

But do you know something very interesting? Mr. Carter committed suicide at  a young age of 33 despite receiving so much respect, attention and acclaim.  What was the reason for the suicide? It is said that as he was busy celebrating the award, the news of his receiving the Prize was being shown on various TV channels. At that time someone asked in a phone interview, what happened to the girl in the end? Carter replied that he did not know since he was in a hurry to catch a flight.

The man persisted, how          many vultures were there? Carter replied “only one.” The man on the other end of the phone said, “I am saying that there were two vultures there that day. One real one and other one with the camera.”

Realising the implications of the words, Carter became upset and eventually committed suicide. Carter could have    been alive today if only he had taken the trouble to carry the child to the UN Mission Feeding Centre which was only half-a-mile away.  At that moment of glory of taking a visual, it did not strike  to him  that he should make some effort to save the child !

READ ALSO  Woman power to the fore during a pandemic

Why I am telling this 27-year-old story is that all these things are being repeated all over again by hundreds of people with cameras all over India adding to the misery of migrant labourers. A recent fake news caught my attention: A child scrapping the road to  take  some cereals. Later it was found that the photo-journalist had given the cereal to the child to put it on the road and  asked the child to pick it up. He was busy taking the photograph  for sensationalising  an issue.

Let us all face the truth that migrant labour problems are immense, reminding us of the Partition. But why add mirch masala to the existing problems and present it to gullible public?

A photograph is worth a hundred words. An old saying but now we just do not know whether we have to believe any photograph presented  to us.

With the advent of modern technology, there  is  every possibility that every photo or video is morphed, altered in such a way  just to increase the TRPs.  Not so long ago, a man injured severely was lying on the roads of Jaipur crying for help. Lo, what did our citizens do?  Hundreds of citizens were busy taking selfies so much so when they ultimately took him to the hospital, it was  proved very late. He died.

A recent video recorded during Rishi Kapoor’s last moments at the Hospital was pathetic. The actor was gasping for air and our medical staff on duty in the room were busy taking selfies with the actor. How mean can one stoop to?

I have stopped viewing all the electronic media since all I see is the gory pictures of all that is going wrong in India at present.  If everything was going wrong as being portrayed, is it possible to have a survival rate of 60 percent in this pandemic? Some channels are busy with China bashing day in and day out.

It is time our media change their approach and start telecasting some positive news too which encourages the public to become more courageous to face the pandemic. It is time there is a balance reporting  between the good news and the so-called bad. I am happy that at least the print media is being balanced in their reporting.

How does one make out if a visual is a fake or morphed or a real one? An old Nazi saying: “Tell a lie hundred times and it becomes the truth.” So, it is time our channels in the electronic  media reduce the so-called “breaking news”  and instead give the public some positive news along with the regular Corona news too.

Good or bad, we have elected this government. Let us give them space to  work rather than continuously badgering them regarding their under-performance.  Everybody only knows how to criticise but any solutions ?