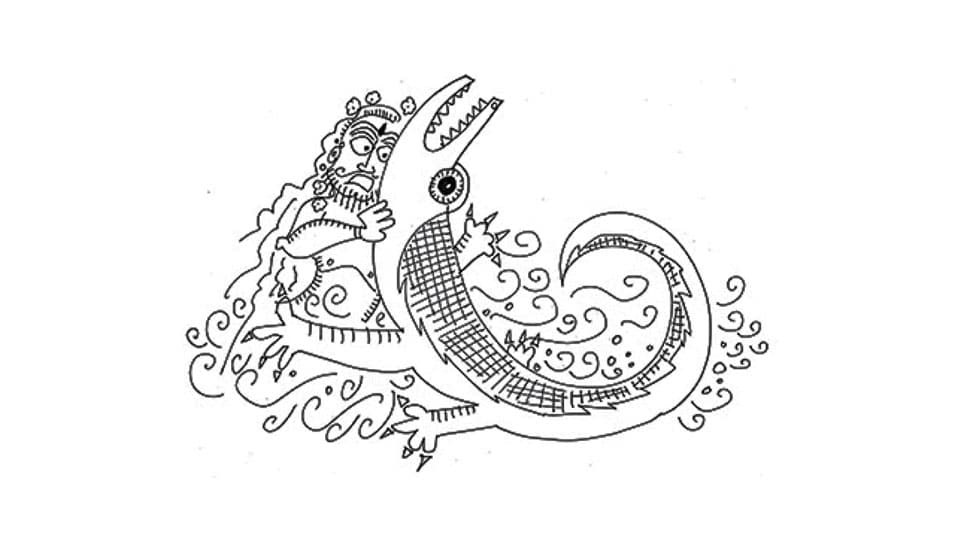 In Egyptian, Persian, Assyrian and Sumerian imagery, kings are often shown hunting lions and defeating them with their bows to establish their power. Images of the epic hero Gilgamesh often show him holding a lion firmly, as if it were a cat. That image establishes his greatness, just as images of kings killing lions establishes theirs.

In mythology, heroes are identified at an early age by their ability to deal with wild animals. In the Bhagavad Purana, Krishna is considered a hero because, early in life, he defeats demons who take the form of wild animals: snakes, horses, bulls, birds. In Greek mythology too, baby Hercules kills two serpents while still in the cradle.

In the Ramayana, we hear stories of how Hanuman defeats Surasa with his wit and Simhika with his brawn while flying across the sea. Less known is the story of Hanuman defeating the crocodile. The story goes that whilst in search of Sanjeevani, he enters a water pond filled with five crocodiles. They attack him but he wrestles and overpowers them, when they reveal they are actually apsaras. They tell him that the sage who told him to take a bath in this pond, before finding Sanjeevani, was not a sage but a Rakshasa called Kalanemi. Hanuman then liberates the damsels, and punishes the rakshasa for misguiding him.

A similar tale is found in the Mahabharata. Arjuna during his pilgrimage learns of five pools each infested by a crocodile. He overpowers them and they turn into apsaras. They thank him for liberating them. Long before this incident, we hear the story of a crocodile taking hold of Dronacharya’s foot and all the students run away except Arjuna who strikes the crocodile dead with his bow and arrow. A grateful Dronacharya promises to make him the greatest archer in the world. Thus, defeating a crocodile is a sign of heroism in both Ramayana and Mahabharata.

In legend, it is said that a crocodile caught hold of Adi Shankaracharya’s feet and would not let him go, until his mother gave him permission to become a sanyasi. This story reminds us of another wherein a crocodile catches hold of an elephant’s foot and begins dragging him under water, until Vishnu comes to his rescue. It is one of the oldest tales from Vishnu Purana carved on the walls of the oldest Gupta temple found in Deogarh, though here instead of crocodile, it is a Naga, or serpent. This story is called Gajendra Moksha, or the liberation of the elephant-king, the lotus pond representing the material world. Adi Shankaracharya’s story parallels Gajendra Moksha, his mother’s permission to take sanyas is comparable to Vishnu’s Sudharshan Chakra which saves the elephant from the crocodile.

It is interesting to note that Bal Narendra’s story about young Narendra Modi, which is meant to inspire young people, speaks of his encounter with a crocodile. He enters a crocodile infested lake to fetch a ball and brings a baby crocodile home but his mother insists he set it loose, back in the wild, as it is not right to separate a child for its mother. No one can prove if this incident actually happened but it is a powerful political myth with great mass appeal to establish Modi as a brave and powerful hero, who does not fear anything.