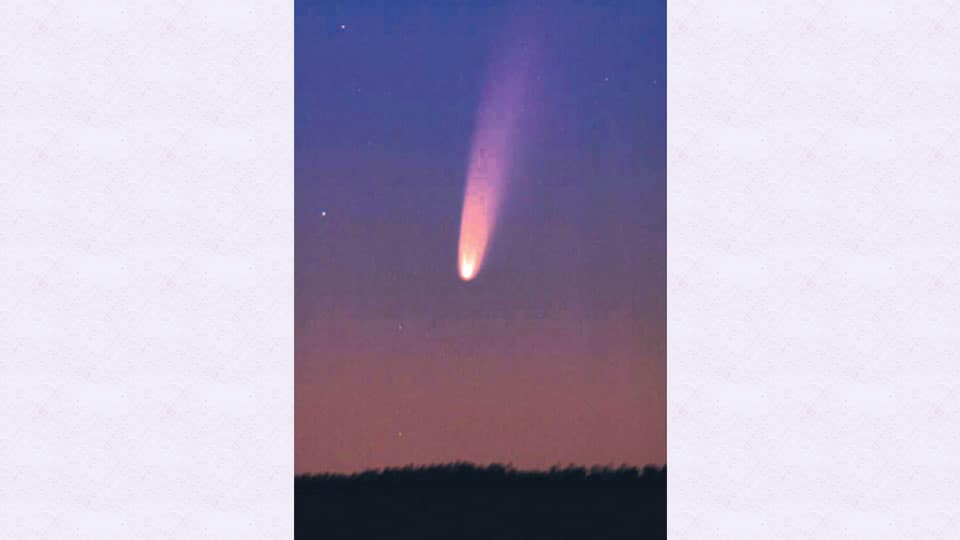 Heavenly visitor ‘NEOWISE’ at its best this month

The most beautiful and impulsive celestial object perceptible in the night or morning sky is the ‘Comet.’ Most of the time, Comets remain in deep-frozen “sleep” in outer space, but sporadically they are dislodged from their orbits and fall forward the inner Solar System. Comets are at their brightest when they are closest to the Sun. It is best to search for them in the sky unswervingly after sunset although never when the Sun is still above the horizon.

In the month of July of this year, fix your stares on the sky to watch the spasmodic comet ‘NEOWISE.’ Throughout July and beginning week of August, it will be discernible in the Northern Hemisphere.

The behaviour of the Comets is highly unpredictable. Comets large enough to be detected in the outer Solar System may prove to have thick, insulating crusts that they never develop, whereas smaller Comets may be as insubstantial as a snowball and melt away to fragments as they come closer to the Sun. One can expect a ghostly greenish-orange splotch to grow brighter in the sky near ‘Auriga’ in the coming days, as Comet C/2020 F3NEOWISE will make its closest approach to Earth shortly.

Comet C/2020 F3 (NEOWISE) was discovered on March 27, 2020, from some 326 miles (525 km) above Earth’s surface by NEOWISE, the Near Earth Object Wide-field Infrared Survey Explorer, which is a space telescope launched by NASA in 2009. Comet NEOWISE was closest to the Sun or reached perihelion on July 3, 2020, passing at about 26.7 million miles (43 million km) from the Sun, or a bit closer than the average distance from the Sun to Mercury. Observers are still reporting seeing it, and so it appears to have survived the close encounter with our star. Comet NEOWISE became one of the few naked-eye Comets of this century, and the Comet has already been photographed behind many famous sites and cities around the globe. The brightness in future of Comet NEOWISE remains somewhat ambiguous but the Comet will likely continue to be detectable only in the early morning sky, but after July 15 in the early evening sky.

READ ALSO  Jupiter and Saturn to dance with Moon tonight

Presently, ‘NEOWISE’ can be seen in northeast direction directing towards ‘Auriga’ constellation at a visual magnitude of 2 to 3 and has been getting brighter and larger since June 2020. On July 6, the magnitude was 2. This Comet is presently undoubtedly a morning Comet and is clearly discernable from even small telescopes from 4.30 to 5 am in the said direction, provided the morning sky should be absolutely clear. Note that, lesser the value of magnitude, greater the brightness.  This Comet can be located near planet Venus in the morning sky presently.

Initially, NEOWISE was not expected to get much brighter than ninth or 10th magnitude, making it manageable only to those with good binoculars or small telescopes. A compromise of observations placed it at magnitude +9.9 on May 10 of this year.  Just under a month late, on June 7, the comet was on the far side of the Sun, 73 million miles (117 million km) distant from the star and 147 million miles (236 million km) from Earth. From June 22 through June 27, the Comet was within the range of the Solar and Heliospheric Observatory (SOHO).

SOHO is a accommodating mission between the European Space Agency (ESA) and NASA. The spacecraft has been stationed in a halo orbit around the Sun-Earth L1 Lagrangian point, a position roughly 930,000 miles (1.5 million km) sunward of Earth. At this point in space, the orbital period of SOHO exactly matches the orbital period of Earth. From this orbit, SOHO is able to observe the Sun 24 hours a day. Using its Large Angle and Spectrometric Coronagraph (LASCO-3), which can create an artificial Solar Eclipse, NEOWISE could be monitored as it passed near to the Sun.

Currently, Comet C/2020 F3 (NEOWISE) is up at dawn now; it will be at the in the dawn sky around July 11. Then it will progressively approach the horizon each day. By mid of July (around July 12-15), the Comet will become evident at dusk (just after Sunset), low in the northwest horizon.

During the beginning days of July, comet NEOWISE is a little complicated to catch because it appears not against a dark sky, but very close to the northeastern horizon just as dawn is brightening the sky. Comet C/2020 F3 (NEOWISE) is up at dawn now; it will be highest in the dawn sky around July 11. Then it will steadily approach the horizon each day.

Comet NEOWISE will be closest to Earth on July 22-23, 2020. It will pass at some 64 million miles (103 million km) from our planet. The good news is that — if the Comet continues looking great — the view during the night of closest approach should be nice. Although binoculars might be required for the celestial visitor, it will be noticeable at the same time we see a beautiful crescent (not too bright) moon.

Even with the help of small telescopes and binoculars, the Comet is noticeable. The Comet is visible from all parts of India. Comet NEOWISE might be visible again from Earth, but not until around the year 8,786! The various astronomical devices used to witness this particular Comet are Celstron Nexstar11 telescope, Meade F3.3 focal reducer, and Stellacam II video camera and Canon 6D, 200 mm Lens f6.3, SO 800. The morningsky is somehow clear from moon light and is the advisable time to see this Comet in by revealing the magnanimity and elegance of sky watching. During the first two weeks of August also, Comet may be clearly perceptible. The reflecting telescope with 6-inch reflector will do to witness this Comet. So enjoy watching ‘NEOWISE’ and reveal the magnificence of astronomy.