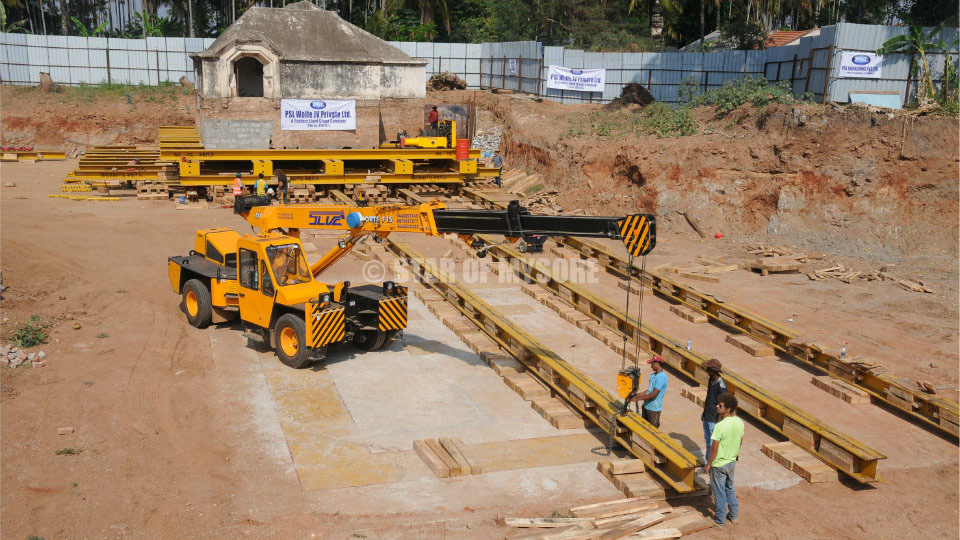 The translocation of Tipu Sultan’s armoury at Srirangapatna to pave way for the double-tracking work of the Mysuru-Bengaluru railway line will be completed by today evening, four days before the deadline.

The armoury has been turned in “L-shape” yesterday and this morning it was just 20 metres from the new location. Railway officials said that the structure will be moved to the final destination in the evening and works including strengthening of the base will be taken up after that. 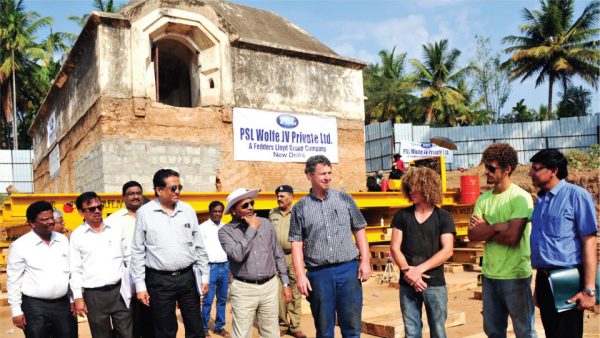 Engineers are seen making last-minute preparations to shift the historical 1,050-tonne Tipu Armoury to its final destination in Srirangapatna this morning.

For the record, the 139-km stretch between Mysuru and Bengaluru has high traffic density with nearly 24 pairs of trains (including weekly and bi-weekly services).  This morning, a team of officials led by South Western Railway General Manager A.K. Gupta visited the translocation site and took stock of the final shifting process.

The contract for translocation was given to the company on 14.03.2013 and a deadline of three years was fixed to complete the works. “The company will complete the process by 14.03.2017, four days before the deadline,” said South Western Railway General Manager A.K. Gupta.

At the final destination, where the structure will stand, the ground has been dug up to 8-feet and has been filled with stones and concrete for a firm foundation. After the structure is placed in “L-shape”, mud up to two-and-a-half feet will be filled and will be levelled with rollers for firm grip, officials said. “The final destination of the armoury is 130 metres from the railway track and once completed, the structure will withstand the vagaries of weather for years to come,” Gupta added.

Regarding the double-tracking works, he said that the only 500 metres of the works was pending in the 139-km section and will be completed by the end of April and on this stretch, 5 to 10 minutes of rail travel can be saved and the total journey from Mysuru to Bengaluru will be reduced by 30 minutes, he said. The latest estimate for the double-tracking project that began in 2007-08 is Rs. 874.57 crore, funded by both Centre and the State. The electrification work between Mandya and Mysuru stations will be completed by June-end and this will cut travel time of Shatabdi Express by around 10 to 15 minutes. At present, Shatabdi Express takes two hours to reach Bengaluru from Mysuru. Electric Multiple Units would commence operations on the stretch after the works are complete and after getting clearance from the Commissioner for Railway Safety, Gupta said.