Mysore:  The decision to restore or demolish the nearly 120-year-old heritage structures — Devaraja Market and Lansdowne building — in the heart of the city will take a lot more time, going by the views of the Mysuru Deputy Commissioner.

However, more than anything it is the sentiments of the people of the city of Mysuru that are involved, as both the buildings are landmark ones, which any citizen is proud to be a part of. Hence many people feel that the buildings must be preserved as demolishing and rebuilding them will never match the original structures.

Speaking to Star of Mysore here yesterday, Deputy Commissioner Abhiram G. Sankar said that he had sent the conflicting reports of both the Government of Karnataka Task Force For Quality Assurance in Public Constructions and Heritage Improvements and Restoration Committee (HIRC) to the State Government. While the former is for demolition and building new structures resembling the old heritage style, the latter report states that both the buildings must be preserved at any cost without being demolished.

Both the reports were sent to the Mysuru City Corporation (MCC)and the Corporation Commissioner in turn had sent it to the Deputy Commissioner. “Since this is a very important issue which also involves the sentiments of the people of Mysuru, the reports have been sent to the Government and the Cabinet with Chief Minister heading it will have to take a decision on this,” he said.

“As the Model Code of Conduct is in force, a decision will be taken after the election results are declared. It will be based on the Government’s stand, but all the stakeholders including the MCC, District Administration, the experts, the tenants of both the buildings will all have to be taken into confidence and only then a final decision arrived at,” he said.

Government of Karnataka Task Force headed by Chairman Prof. B.R. Sreenivasa Murthy and consisting of Prof. R. Jagadish, C.N. Babu (now late) and Prof. Syed Shakeeb ur Rahaman, came out with a report after a complete study of the issues regarding Devaraja Market and claimed that even the HIRC had given the approval for the proposed construction of a multi-storied market complex with at least one basement floor exclusively for parking, keeping the original heritage features.

However, Dr. N.S. Rangaraju, a member of HIRC, had clearly said stated that the members of his Committee were completely unaware of their approval for the dismantling of the heritage structure. He had also categorically said that they were never invited to inspect the Market and hence the question of them recommending anything did not arise at all.

Meanwhile, the then District Minister Dr. H.C. Mahadevappa had also made a visit to both the places. Then when the H.D. Kumaraswamy government took over last year, he also visited the Devaraja Market and made it amply clear that a spot decision cannot be taken on such an important issue as there were conflicting reports from the experts.

Even the District Minister G.T. Devegowda, who also visited the spot, in a veiled way going by the sentiments of the people expressed his support for retaining the heritage structures. 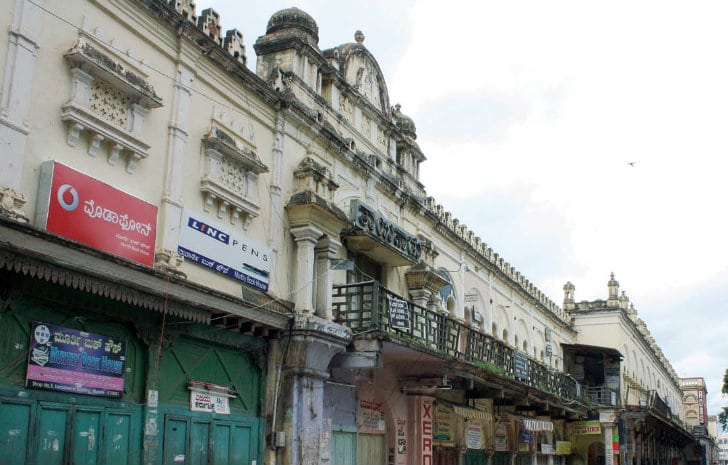 The cost of restoration of the nearly 130-year-old Devaraja Market constructed in 1886  on a 3.67 acre of land was estimated at Rs.9 crore and it was being taken up under the Chief Minister’s special grant of Rs.100 crore for the development of heritage structures and Circles.

The contractor who was assigned the task was Sri Savani Constructions Private Limited. The third party consultant was Indian Heritage Cities Network Foundations. The restoration work of Devaraja Market had begun but came to a grinding halt because of the collapse of the north portion entrance of the Market on Aug.28, 2016.

Lansdowne building was constructed in 1892 to commemorate the visit of the British Viceroy Lansdowne and his wife to Mysore, by the ruler Sri Chamarajendra Wadiyar. The total area of building is 16,092 sq.ft and it has 54 shops on the ground floor and 42 in the first floor.

This work was also taken up by Sri Savani Constructions Private Limited at a cost of Rs.3 crore and the bill paid to them for a part of the work done was Rs.94,59,518. The reason for the work to be taken up was because the south portion of Lansdowne building had collapsed on Aug.25, 2012 due to continuous rain for three to four days in which four people had died.