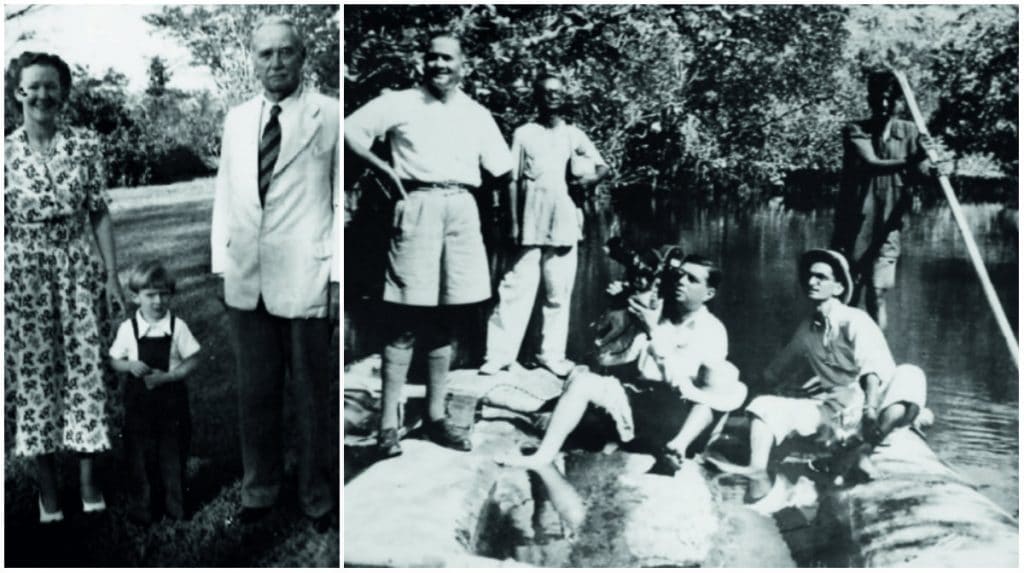 Tracing Mysore’s Connection with the Crawfords – 2

Descendants at Hirvate Estate: “I had never flown in an airplane before in my life. This was the first time and I sat just behind the engine and I hated it. Bahut Kachada,” said David Clement Crawford Lake, grand nephew of Lt.Col. William Loftus Carlton Crawford (1868-1951), sitting at the Hirvate Estate in Sakleshpur.

David and his son James Robert Francis Lake finally came back to visit their ancestral home and thoroughly enjoyed visiting the vast estate — a dream-cum-true, in which their great granduncle had lived. “I was born in Madras and lived in Wartyhully Estate as a young boy. I visited the place and my memories came flooding back. My mother, Helen Gladys Lake (niece of Crawford) was living on that estate and we used to come here often,” warmly recalled David, speaking to SOM.

Reminiscing about his childhood in  Hirvate and his school days, David said that he had studied in Hebron School in Ooty managed by the Seventh Day Adventist. “I hated the school. They were so strict that I would not be allowed to drink water, if I wet my bed,” said David with dry English humour. 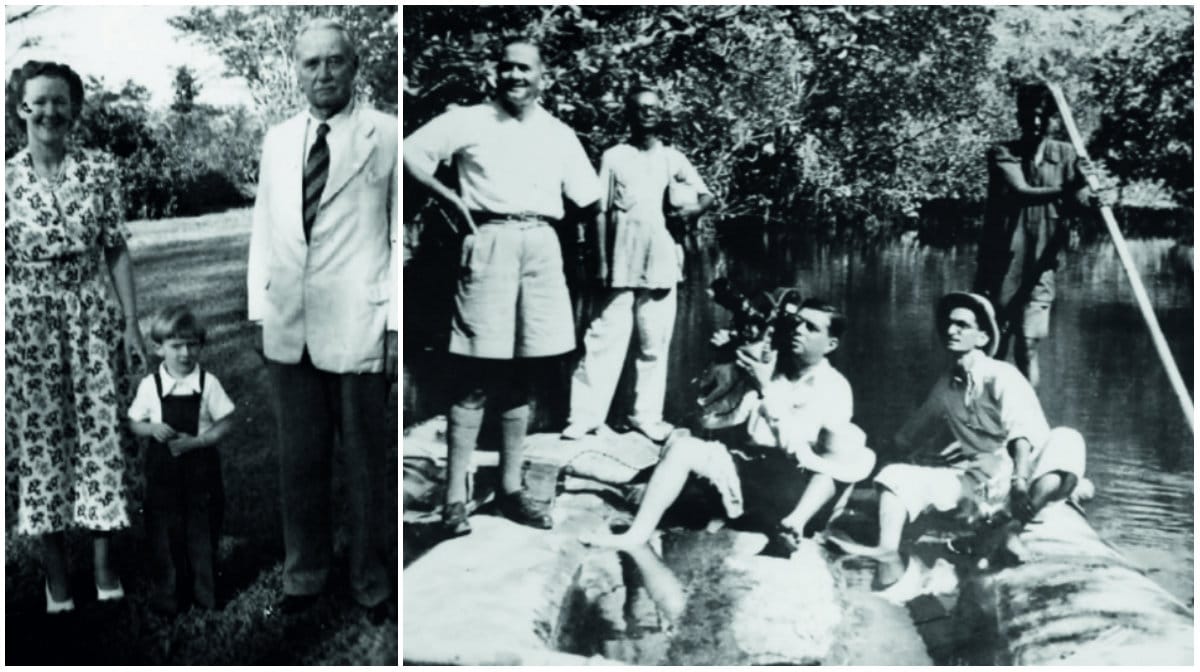 “Crawford went to France during the First World War with the Indian Army, representing the Mysore Rifles. They were all close to a farm which grew apples. The soldiers were caught robbing apples, this made the owner very angry and he reported it to Crawford. My granduncle told the soldiers in a loud  stern voice in Hindi, ‘You do whatever you want. But don’t be caught stealing apples,’” he remembered his granduncle sharing the story.

Every birthday Crawford, who never married would sing “Dance around the Coffin,” so that he could get one more year, said David.

“In 1968 I drove from England in a Land Rover car with my friend through Iran, Iraq, Pakistan through the Khyber Pass and reached Bombay. My friend had enough. To our luck, the car had packed up and we decided to go back by ship,” he said.

“Did your mother, Helen fall in love with her neighbour Lake?” David’s reply was “I hope so!” This was about the marriage between his father Lake and mother Helen Gladys Lake. Though he left India more than 60 years ago, he still can recall many Hindi and Urdu words like Jahannum, Aap ko maloom Hai? Khanjooswala.

“Dad has a big family tree. But we could never imagine that one day we would come to Hirvate estate. I had just registered at Ancestry.com a week before. I just could not believe that finally I could see my forefathers’ place. It was divine intervention that we could finally connect,” said James, who is a Captain in the Royal Marines and has a striking resemblance to Prince Harry.

David runs a 180 acre farm. (It is a bit of jungle), grows coriander and rears about 200 sheep. “My mother had left me some money in a bank in Bangalore ,which had gathered some interest. That is how I could pay for my ticket,” he said with a wry smile.

“Eldest son of a village schoolmaster, Chengapa, walked six miles a day for his early schooling. He was determined to be an officer-that entailed going to Forest College in Dehra-Dun, undaunted by the fact that he was only a matriculate, when he was 31 years old, with a wife and child and no finances. Private coaching saw him through his Senior Cambridge and with faith in himself, he borrowed the finances — went on to Dehra-Dun and at the end of 18 months won seven of the possible nine prizes against competition from the 21-25 year old graduates who were his peers, that was in 1926-1928. Back to his home State of Coorg where there was no vacancy in the officer cadre, he continued to work as a Ranger for one-and-a-half years. A newspaper advertisement for the post of Assistant Conservator of Forests in the  Andamans was the turning point in his life. His 40 years of dedication and commitment to the rain forests of the remote “Kala Pani”, began as he was accepted for the post,” writes Sagari Muthanna about her father Biddanda Subbaiah Chengapa, who retired as Chief Conservator of Forests, Andaman and Nicobar Islands.

Forester Chengapa’s name is still revered in the Andamans as a plant species and a bridge is named after him. The foresters there stand up and  salute when they hear his name. After his retirement from service, Chengapa bought the Hirvate estate in 1964. Before this he had bought an estate in Mercara and was advised that the one he had bought was not suited to coffee. He found Hirvate  was for sale and simply loved the soil for great Arabica, he just purchased it.

“After Crawford died, it was managed by one Radcliffe till my grandfather bought it in 1964. His love of peace and quiet amongst the forests preceded other social and cultural expectations. Hirvate was also a much frequented holiday home for my grandmother Bollu Chengapa’s brother Field Marshal Cariappa,” said Samrat..

Recalling his grandfather’s contribution to forestry, he said, “He loved Hirvate when he bought it. My father Melly Chengapa (B. Aiyanna Chengapa) was a corporate person who had worked in Delhi, Madras, London, Switzerland and other places. Soon after his father died, being the eldest son, he returned to the estate and passed away in 1993. My mother Cauvery Chengapa lives there fondly tending to the estate.”

READ ALSO  India, Pak closest neighbours, there can be so much give ‘n’ take, Says A.S. Dulat, former Chief of Research and Analysis Wing

Unlike many other Britishers who looted the country and took back everything, Crawford, who died in India, had left a Will that is in the possession of Samrat. “Crawford was a most generous man. He had thought of the minutest detail and apart from distributing his vast wealth to his nephews and nieces, he also never forgot to mention his cook and boy’s name. “ To my domestic servants Cook Aracswamy and boy Maneca if in my employ at my death a sum equal to two years in wages in addition to any sums owing  them to meet my death for wages or otherwise: I give to my niece Helen Gladys Lake the larger of my two travelling clocks which belonged to my mother and to my niece Sheila Wheeler the smaller clock,” are just two details in the Will,” he said.

Meanwhile, Samrat received a mail from another great grandnephew of Crawford recently. “Our family connection is with one of the other Crawford brothers, namely John Gordon Hatton Crawford, who was one of the five brothers of W.L.C Crawford, C.S. Crawford, H.V.Crawford and J.R. Crawford. John had a child with an Indian lady, but was not married. The child, known as Ravie Irene Crawford (my grandmother) was placed into an orphanage, we assume nearby to the estate at age of 12. She was born on September 3, 1898.

Almost nothing is known about the Indian lady. We don’t know her name, no records are held and no photos exist in our family. I have made contact with James C Lake as neither family knew of the existence of the other! Until recently we thought there were only three Crawford brothers, but following the discovery of an obituary, there now seems to be five!

The birth of my grandmother may have been kept a secret those days, so perhaps it will be impossible to discover any further information?” wrote Paul B.C. Coburn whose middle name is Crawford.

Samrat was fascinated and amused to receive this mail,but realised, he could do precious little as the trail is almost cold.

“I decided to renovate the house in the estate. I took a chance and wrote to Tricia Foley, the leading architect in New York, little expecting that she would reply. She hasn’t only replied, but came all the way to Sakleshpur and doing up my house,” said Samrat and added, “Hirvate will be called Crawford House by Tricia Foley.”

If only the academia in the Universities, that have a rich history, show as much interest as Samrat Chengapa and James Robert Francis Lake, then the legacy, the culture and the history of a State, people and the country can be taken forward.