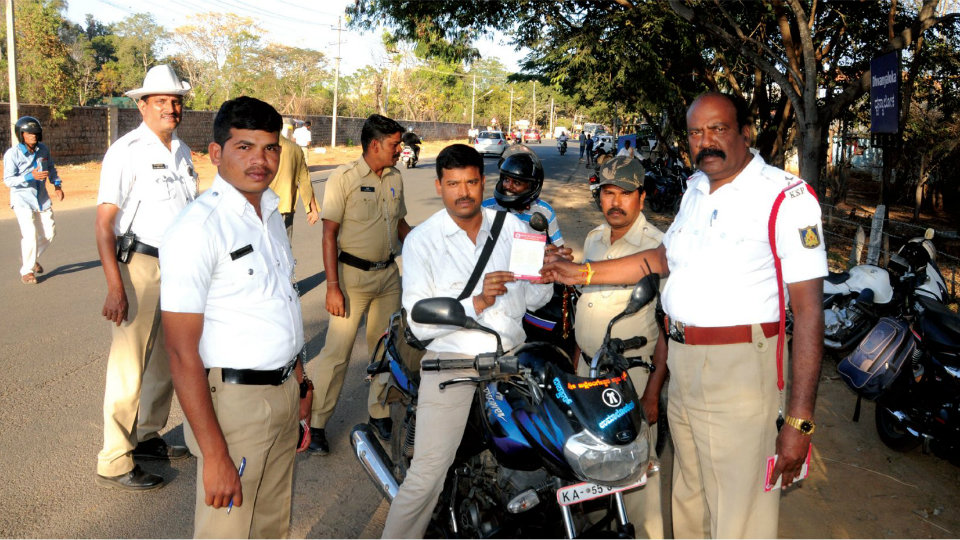 Mysuru: The Mysuru Traffic Police which has made it mandatory to wear ISI mark helmets about a month back and gave time to motorists (two-wheeler riders) till Jan. 31 to purchase ISI mark helmets conducted ‘Friendly Enforcement Drive’ in city yesterday.

But the Cops refrained from imposing fines from those who were not wearing certified helmets, but instead, issued them traffic advisory slips to educate them.

The drive was held throughout the day at all the major thoroughfares and junctions across the city from 9 am to 7 pm to ensure safety of motorists and a total of 8,000 traffic advisory slips were issued.

Bikers who were found triple riding, car drivers not wearing seat belts and those who did not possess required documents such as Driving Licence (DL), Registration Certificate (RC), etc. were given traffic advisory slips for all such violations.

City Police Commissioner Dr. A. Subrahmanyeswara Rao said that it is mandatory for all two wheeler riders to wear ISI mark helmets as per the rules and added that it is to be known why the Bengaluru Traffic Police withdrew the rule.

He said that the drive would continue in city.