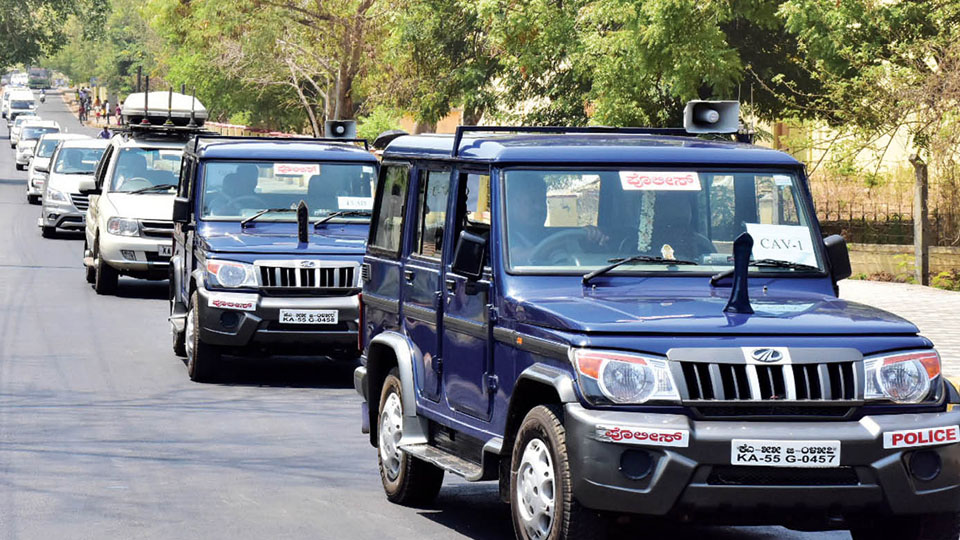 Mysuru: Prime Minister Narendra Modi will campaign in the State by addressing seven rallies, starting tomorrow (Apr. 9). The venues of the rallies have been chosen to cover the entire State, divided into clusters of three or four districts. The very first public rally will be held in Chitradurga tomorrow noon and Modi will land at Mysore Airport in Mandakalli at 4.40 pm. The PM’s cavalcade will move from Mandakalli to Maharaja’s College Grounds. He will address a mammoth public rally from a specially set up stage at 4.50 pm.

Modi is the first VVIP to arrive in Mysuru to canvass for BJP candidates in the poll-bound Mysuru-Kodagu and Chamarajanagar LS Constituencies and the city Police have made elaborate security arrangements. Apart from Police and paramilitary deployment at key locations, security drills are being conducted to ensure that the PM’s movement in Mysuru and his public address are incident-free.

Narendra Modi travels in Boeing 747-400 (Air India One), though not all-that state-of-the-art, but is quite a flying fortress. The aircraft is operated as VIP flight by the Indian Air Force (IAF) and is constantly monitored by IAF from Palam Airport in New Delhi. The Special Protection Group (SPG), responsible for PM’s security, will cordon off the Mysore Airport hours before the plane will arrive and only VIP vehicles will be allowed inside after a thorough screening. Public vehicles will not be allowed.

This morning, over 50 Policemen, part of Anti-Sabotage Team, drawn from various districts, conducted a security drill at the Maharaja’s College Grounds. Apart from checking the outer venue, the team checked the stage and the rest rooms set up behind the stage. A special Police team also conducted an escort rehearsal from Mysore Airport till the Maharaja’s College Grounds.

Modi will address the rally from stage that has been set up at a height of 12 feet with a width of 30X50 feet. The stage is expected to complete before today evening and the premises will be out of bounds till people start arriving to the rally tomorrow. There will be 12 entry points and Modi will enter the stage through a special entrance once he alights from his armoured BMW.

Speaking to Star of Mysore, City Police Commissioner K.T. Balakrishna said that the PM will arrive at 4.40 pm and will leave the city by 6 pm after addressing the rally. There will be no other traffic from Mandakalli to Maharaja’s College Grounds when the PM’s cavalcade is moving. The SPG commandos have already inspected the Airport, the route and the rally venue. He said that all the security measures have been planned and executed as directed by the SPG.

The specially set up stage and the German tent shelter where the audience will be seated have been sanitised for any possible threat. A special meeting was held by the city Police to chalk out the security plan which was attended by Inspector General of Police (Southern Range) Umesh Kumar, City Police Commissioner K.T. Balakrishna, Deputy Commissioner of Police (Law and Order) M. Muthuraj and Superintendent of Police Amit Singh.

Seven SP-rank Officers, 11 ACPs, more than 50 Inspectors, 12 City Armed Reserve Platoons, District Armed Reserve Police, Mounted Police personnel, Chamundi Patrol Vehicles will be deployed all along the PM’s cavalcade route.  In all, over 1,500 Policemen and officers will be a part of the security apparatus.

Dog Squad and Bomb Disposal Units have been conducting inspection of the venue four times a day and instructions have been given to all street vendors near Maharaja’s College Grounds to shift their business elsewhere for security reasons.

At the rally venue, metal detectors will be installed at the entry points to screen the visitors.  Directions have been given to the Police to set up temporary parking lot at Scouts and Guides Grounds and surrounding areas.