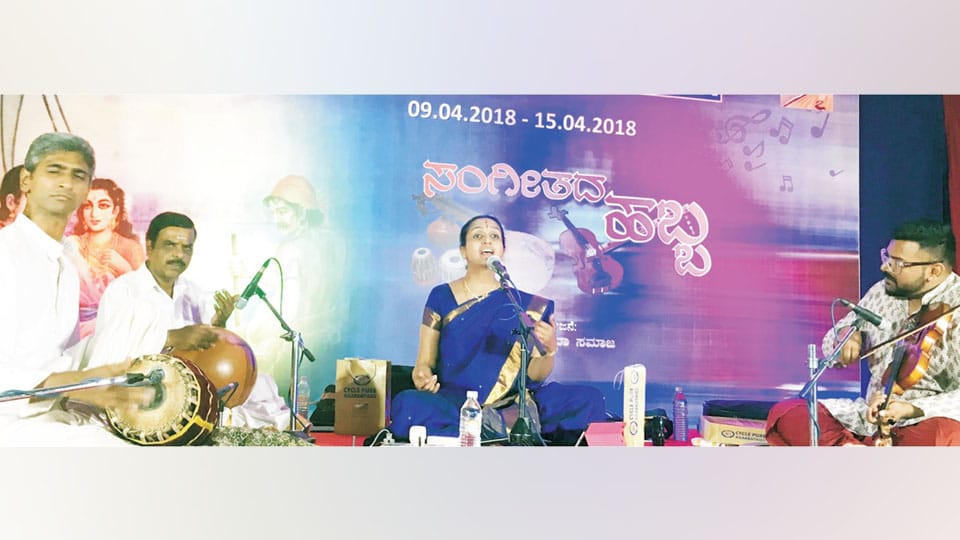 Mysuru: Bhagini Ramotsava began on the 9th of April this year. This arrangement of organising the concert series after the other Ramotsavas in the city , is, in a way, a welcome gesture as the music connoisseurs are not deprived of the various Ramanavami concerts held in different venues.

On the second day of Bhagini Ramotsava in city, Vidushi Vrinda Acharya from Bengaluru gave a vocal recital. She was accompanied on the violin by Paroor Ananta Krishnan, on mridanga by Radhesh and on ghata by M.R. Manjunath.

Vrinda’s voice is her asset.  Singing in shruti, with bhaava, using lavish gamakas and only moderate amount of brighas, is the key to touching the listeners’ hearts. Rising to the occasion, Vrinda had chosen compositions on Lord Rama for her concert.

After a brisk varna rendition in Todi, (Eranapai, Adi TaLa) Vrinda offered pranamas to Ganapati with ‘Pranamamyaham Sri Gauri sutam’ in GAula by Mysuru Vasudevachar suffixed by crisp swaras to the pallavi.  Latangi was the main attraction of the evening. The raga essay by the vocalist and more by the violinist was attractive with charming brigas and sangatis entrenched with bhava. Patnam Subramanya Iyer’s ‘Marivere dikkevvaru Ramiah’  in Khanda Chapu found a good neraval at ‘Dharalona Nee sAti’ followed by intelligent poruttam swaras and muktaya.

Kambhoji, the main raga of the day was treated with brilliance by Vrinda. Tyagaraja’s ‘Evvari Mata’ is a composition with complicated sangatis and high scope for neraval at the beginning of the charana part.   Vrinda used her talent to explore the raga, to render the composition systematically with no speed and to develop an extensive and meaningful neraval to ‘Bhakta Paradheena’. Parror Ananta Krishnan’s soft and confident  bowing added colour to the rendition. Husband Arjun Kumar’s influence in the complicated muktaya swaras was evident. Taniyavartanam by Radhesh on mridanga and Manjunath on ghata was enthusiastic and energetic.