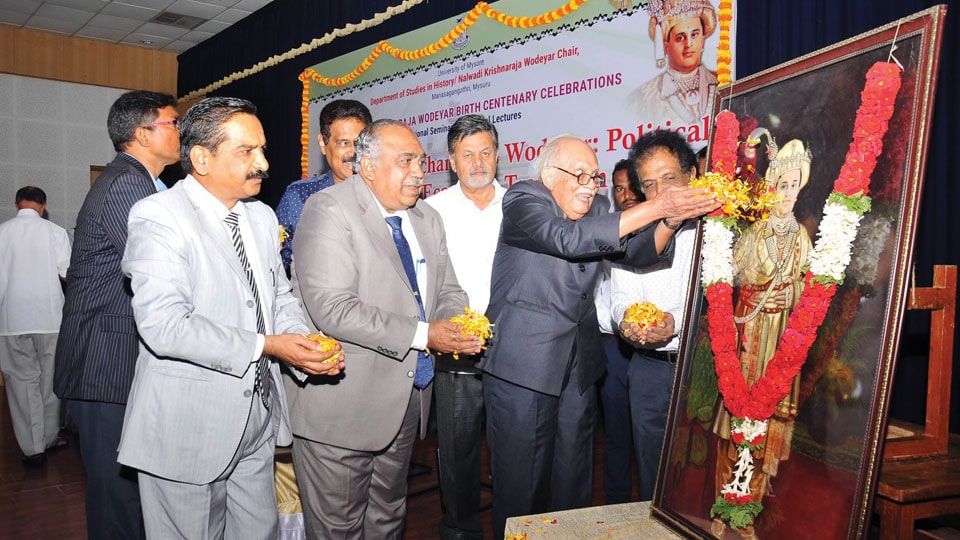 UoM Centre for Higher Studies to be named after JC Wadiyar

He was speaking during the inauguration of the three-day National Seminar and Special Lectures on ‘Mysore under Jayachamaraja Wadiyar: Political, Social and Economic Transition,’ jointly organised by the Department of Studies in History and Nalwadi Krishnaraja Waidyar Chair, UoM, at Rani Bahadur auditorium on the occasion of Jayachamaraja Wadiyar’s Birth Centenary celebrations.

The centre will be built on the sprawling 23 acre land located at the foot of Chamundi Hill which will cater to research in the fields of Science and Humanities, he added.

Lauding the works and services of the last ruler of Mysore, Prof. Hemantha Kumar not only remembered JC Wadiyar’s contributions to western and Karnatak music but also remembered him (JC Wadiyar) receiving a gold medal in Political Science from Nalwadi Krishnaraja Wadiyar who was the then VC of Mysore Varsity. Later, in his inaugural speech, former VC of Mangalore and Goa Universities Prof. B. Sheik Ali said that Jayachamaraja Wadiyar continued the legacy of Nalwadi Krishnaraja Wadiyar, whose era was compared to ‘Ramarajya’ by Mahatma Gandhi.

“Jayachamaraja Wadiyar was a great thinker and had a poetic mind apart from being a philosopher. During his rule, the country witnessed national movement and other incidents which were handled by him with utmost care in Mysore State. But, today there is a need for us to think whether our society is following the principle of humanity and brotherhood,” said Prof. Sheik Ali.

Stating that India was the land of great personalities such as Buddha, Mahaveera, Kabira and others, the former Vice-Chancellor called upon the educational institutions not to confine themselves to mere information distribution centres but to grow as knowledge centres to contribute in nation building.

It may be recalled that Pramoda Devi Wadiyar had sent a proposal to name University of Mysore campus located at the foot of Chamundi Hill after Jayachamaraja Wadiyar apart from writing a letter to the Union Government to rename AIISH after the last ruler of Mysore.

The three-day event will witness several sessions and special lectures on Jayachamaraja Wadiyar. The valedictory event will be held on July 20.