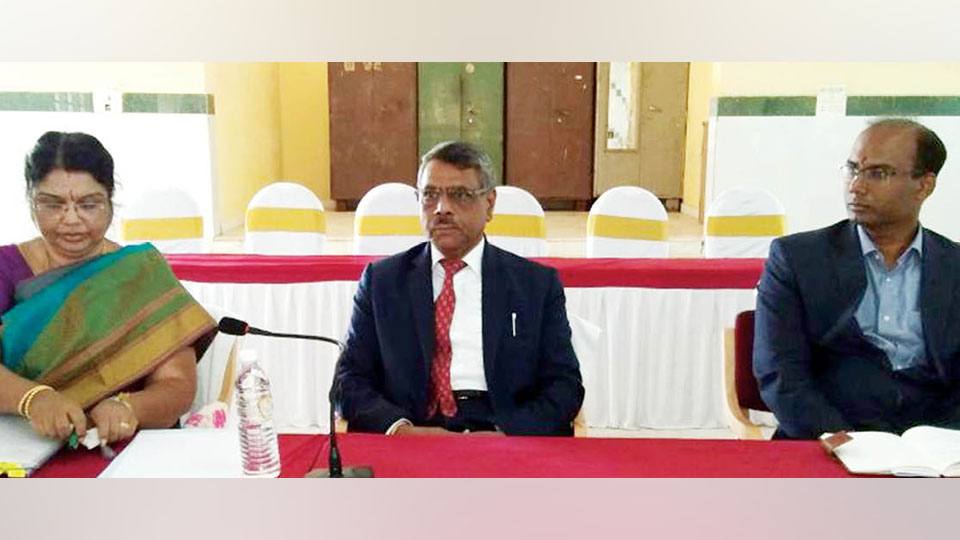 Mysuru: Upa Lokayukta Justice Subhash B. Adi issued a stern warning to Chamundi Temple priests that legal action will be taken if they do not maintain the sanctity of the holy shrine that is visited by lakhs of devotees every year.

He was chairing a meeting of the temple authorities held at Dasoha Bhavan atop the temple this morning that was attended by Deputy Commissioner D. Randeep who is also the Administrative Officer of the Hill Temple, Temple Executive Officer Prasad and Commissioner of Religious Endowment and Charitable Department C.P. Shylaja. Temple Chief Priest Shashishekar Dikshit, Administrative officers from Muzrai Commissioner’s office in Bengaluru Latha and Sujatha and Mysuru Muzarai Tahsildar S.N. Yathiraj Sampathkumaran and Agama Shastra Pandit Shivashankar Dikshit.

The meeting was summoned by the Upa Lokayukta following a series of complaints from the devotees regarding the ‘mismanagement’ of the temple. Devotees had complained that the temple never opened on time and some unauthorised persons were supplying water to the temple from Devikere. The person who is responsible to supply water from Devikere has sub-let the contract and even the priests and ‘paricharaks’ who are supposed to prepare the Panchamrutha have sub-let the work to others, the complainants alleged.

The complainants had told the Upa Lokayukta that many unauthorised persons were allowed to enter the sanctum sanctorum of the temple. Delving deep into the complaints and how the temple was being managed, Justice Subhash Adi told the temple management that as per the Agama Shastra, the temple must be open between 4 am and 5 am.

Directing the temple Executive Officer Prasad to ensure that water from Devikere is supplied by the persons who are supposed to do it, he warned of legal action if rules are violated. “The temple is famous and lakhs of devotees visit. The priests and the temple administration have to maintain the sanctity of the temple and violations will not be tolerated,” he said.