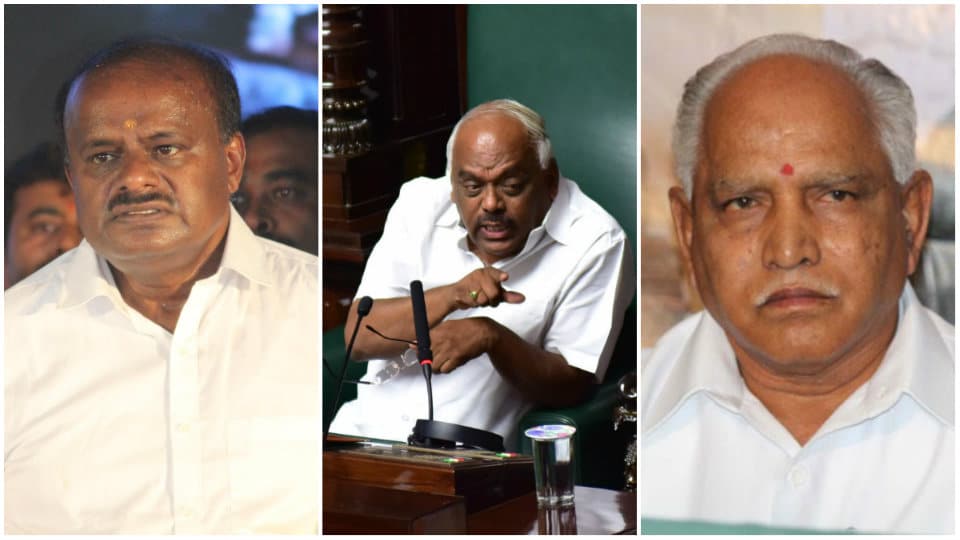 Uproar in LS over BJP’s bid to topple coalition Government

As soon as the Lok Sabha assembled for the day, Congress MP K.C. Venugopal sought Speaker Sumitra Mahajan’s permission to speak on the issue of ‘Operation Lotus’ by the BJP.

He alleged that the efforts to bribe the Congress MLAs in Karnataka was going on and Prime Minister Narendra Modi and BJP President Amit Shah were also purportedly involved in it.

She then started the proceedings of the Question Hour. But the Congress MPs were not ready to relent even after the assurances from the Speaker. Some of the Congress MPs came to the Well of House and started raising slogans denouncing the BJP’s effort to topple the Government in Karnataka and protested.

The MPs of the Telugu Desam Party and All India Trinamool Congress also came to the well of the House. They also raised slogans and waved placards slamming Prime Minister Narendra Modi’s government on various issues. After continuing with the Question Hour for some-time, the Speaker adjourned the House for an hour.

Debate in the Assembly

Meanwhile, at the Assembly in Karnataka, Congress Legislature Party leader Siddharamaiah was set to move for disqualification of four MLAs mostly during lunch break of the Assembly session. Siddharamaiah met Speaker K.R. Ramesh Kumar and has sought time.

The Assembly session began at 11.30 am with Speaker Ramesh Kumar addressing the session: “Our every move and action should be responsible. But unfortunately, the clip refers specifically to my name.”

He was referring to the audio clip released by Chief Minister HD Kumaraswamy last Friday to expose the BJP’s alleged attempts to lure a JD(S) MLA with the promise of money and position. In the alleged audio recordings of Yeddyurappa’s conversation with a JD(S) MLA’s son, the former is heard offering money and position to JD(S) MLAs, claiming that his party top brass will manage the speaker and the higher judiciary.

“Speaker is the custodian of the House. People are watching us. I’ve spent two nights in distress. I left home and went to Raichur to distract myself from the pain,” said Ramesh Kumar. “I request the House. You chose me unanimously. Never have I acted in a manner unbecoming of me,” he said.

“My apprehension is that someone who is a member of this House is in the audio clip casting aspersions on me,” said an emotional Speaker, also remembering his late mother.

Later, the Speaker advised the government to constitute a Special Investigation Team (SIT) to look into the controversial audio clip.

“I’m not directing you. I’m advising the CM to form a SIT and ascertain the truth on who said it, why it was said and whether it really happened,” Kumar said on the floor of the House, after a detailed discussion on the audio clip in which it is alleged that the Speaker was bribed to accept resignations of disgruntled MLAs. Kumar has asked the government to submit a report in 15 days and “give me respite.”