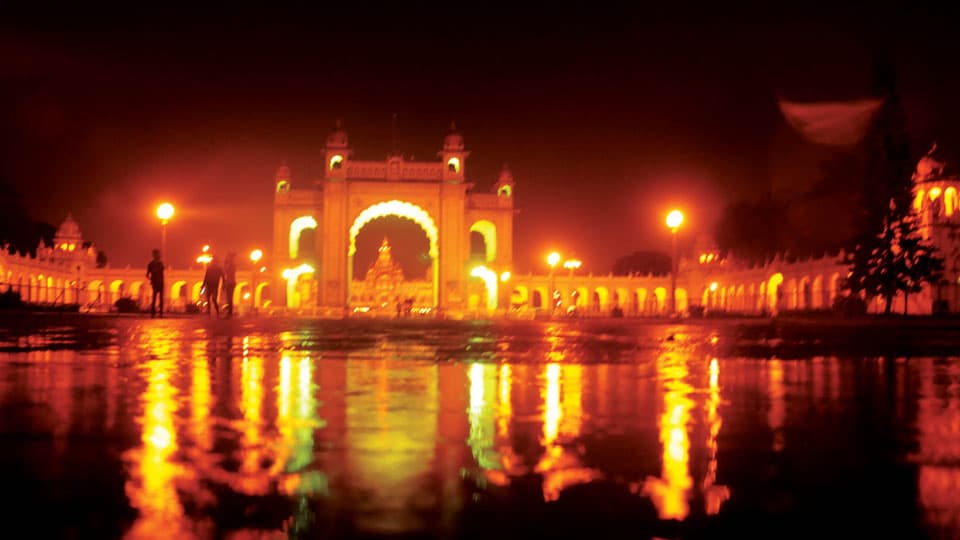 Mysuru:  Heavy rain accompanied by thunder and lightning lashed Mysuru and surrounding areas last night in what was the first spell of rain of the year. The downpour continued for about half-an-hour and in some areas, it rained for more than one-and-a-half hours.

Before the rain brought down the temperature, searing heat prevailed in the atmosphere that led to gradual building up of clouds, resulting in rain at around 7.15 pm. The light drizzle turned into a downpour within minutes and had many on the streets running for cover.

Drainages and storm water drains overflowed at several low-lying areas and the rains caught the Mysuru City Corporation (MCC) authorities by surprise. A huge tree fell on a car (KA-09 P-7554) that was parked near Uttaradhi Mutt at Agrahara.

The heavy shower helped bring the temperature down considerably. The day time temperature on Sunday had reached a maximum of 32.8°Celsius which was 2°C above normal, according to Indian Meteorological Department.

Weather experts attributed the rain ranging from moderate to heavy rainfall to formation of a trough over the peninsular region. According to meteorologists, the cloudy weather conditions with light to a moderate spell of rains likely to continue till Monday (Feb.11).

“The sudden rain is due to the formation of a trough extending from Tamil Nadu to Telangana including parts of South interior Karnataka districts. This has resulted in thundershowers along with squally winds in certain pockets of the region. The situation is likely to continue till Monday. While it is common to witness hot and humid day, it is likely to cause downpour towards evening,” explained Dr. G.S. Sreenivasa Reddy, Director of Karnataka State Natural Disaster Monitoring Centre.

The prevailing situation has resulted in bringing down the day temperature by a couple of degrees Celsius in the last two days. “What was used to be 32 and 33-degrees centigrade has come down to 29 and 30 degrees Centigrade,” Dr. Reddy said.

The sudden showers, while bringing down temperatures, have also triggered worries among farming communities in the region. The mango crop which had begun to bloom is reportedly hit severely by the rains. Several trees in some of these taluks were uprooted due to heavy winds and downpour.