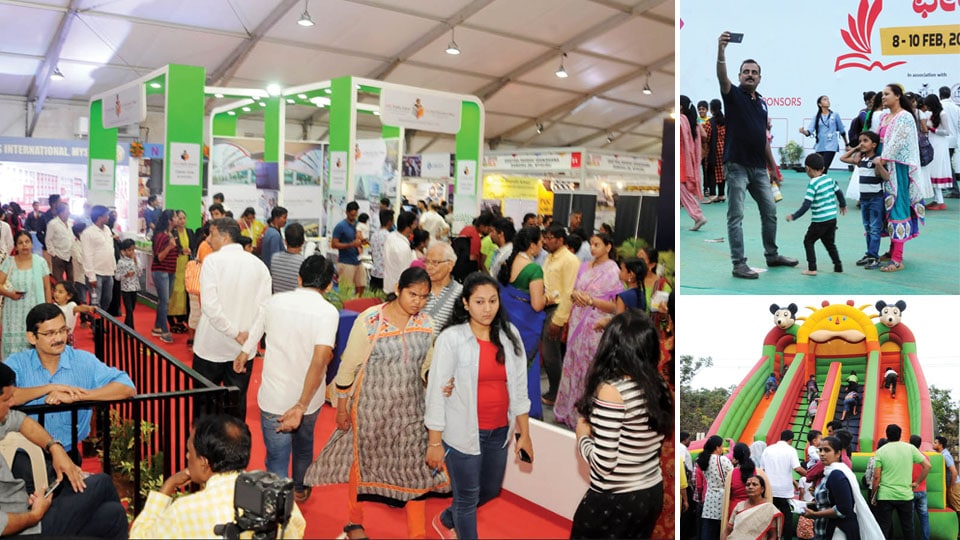 Mysuru: Curtains came down yesterday evening on the three-day Star of Mysore Education Fair which was at Maharaja’s College Grounds from Feb. 8. The Edu Fair was a grand success with response from students, parents, public, teachers representatives of various educational institutions.

Over 85 educational institutions from kindergarten to post graduation studies in and around city and also from Nanjangud, Pandavapura, Kodagu and other places had set up their stalls to showcase what courses their institution was offering to the students, facilities provided to them and the fee structure of various courses.

Over 35,000 people, including students and parents attended the three-day mega event.

A large number of students thronged the Virtual Reality stall, witnessed demonstration of robots, viewed the celestial beauties through telescope, besides coming to know about vintage cars and sport bikes and enjoyed lip -smacking delicacies at the Food Court at the Edu Fair.

The entire Edu Fair was air conditioned and facilities such as portable toilets, rest-rooms, Police security, hassle-free parking facility was provided   by the organisers.

Participation of cine actors, traffic awareness by City Police, painting and drawing contest for children, selfie with Star of Mysore mascot, guidance and counselling programme for students on what next after SSLC? and other events were the major attractions, which received spectacular response.

Speaking after inaugurating the valedictory function of the three-day Edu Fair, Mysuru-Kodagu MP Pratap Simha appreciated Star of Mysore for organising the Edu Fair by bringing various educational institutions under one roof to provide information about education prospects and opportunities in and around the city.

He called upon teachers and parents to develop the city as an education hub along with yoga and cultural destination   in the State.

Simha said that the district is blessed with 12 engineering colleges, innumerable educational institutions, two rivers with abundant water and other  natural resources.

Highlighting his achievements in the last five years, he said that he has strived hard to improve the infrastructure for the promotion of industries, tourism and education, road and rail connectivity after he was elected to the Parliament from Mysuru-Kodagu  Parliamentary Constituency.

“Apart from this, I have also worked hard for the upgradation of the Mysuru-Bengaluru Highway into 10 lane at a cost of Rs. 6,400 crore, construction of a flyover, completion of outer ring road, establishment of Passport Seva Kendra, flight service from Mandakalli Airport and its development and other developments in city,” Pratap Simha said.

Speaking on the occasion, Star of Mysore Editor-In-Chief K.B. Ganapathy said that the Edu Fair was organised as part of the newspaper’s journalistic social responsibility for promotion of educational activities of the region besides to provide a platform for best educational institutions to showcase their offers and facilities to the students.

He said that the Edu Fair received overwhelming response and hoped to organise the Edu Fair next year also in a grand manner. He described MP Pratap Simha as a dynamic leader and wanted him to continue his people-friendly work for the betterment of the society.