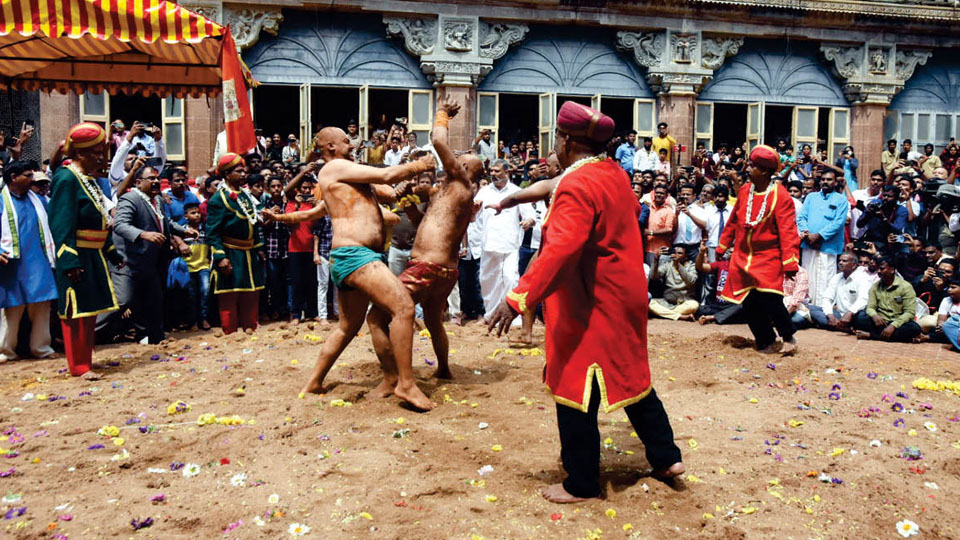 Mysore/Mysuru: As part of Dasara, the traditional Vajra Mushti Kalaga, an extinct form of wrestling, came alive at Karikallu Thotti in front of the Palace Kalyana Mantapa on Wednesday, the last day of Vijayadashami celebrations, in front of a sizeable gathering.

Jattis (wrestlers) from Mysuru, Chamarajanagar, Bengaluru and Channapatna participated in the Kalaga. At Wednesday’s Jatti Kalaga, Manoj Jatti of Channapatna and Achyut Jatti of Chamarajanagar were paired against each other, while Mysuru’s Vishnu Balaji Jatti was up against Bengaluru’s Taranath Jatti. The bout  began at about 11.10  am, watched by Yaduveer, his mother Pramoda Devi and son Adyaveer. Both the bouts ended in about 30 seconds after one of the Jattis received a blow on his head by the opponent and bled in  his head.