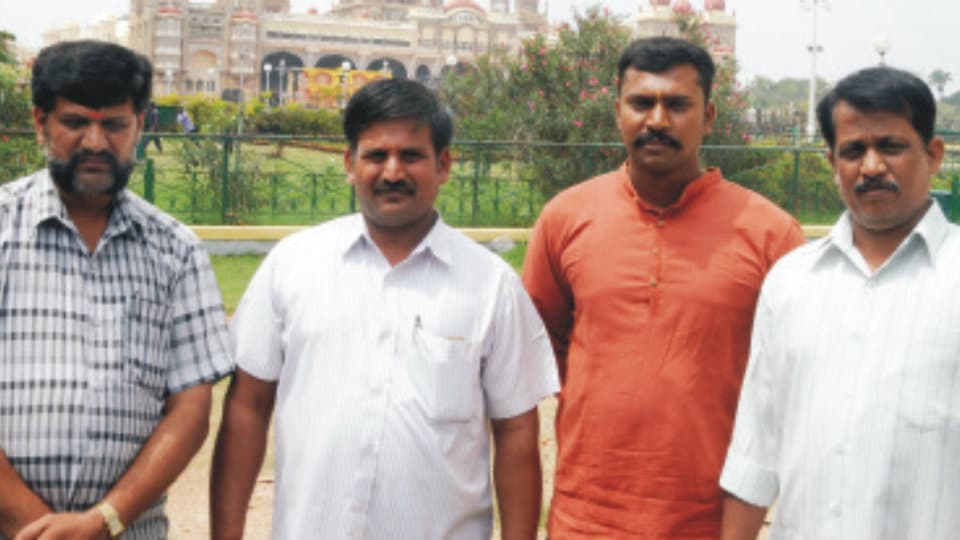 Mysuru: The centuries old tradition of Vajramushti Kalaga will herald the Dasara procession on Oct.19. The tradition has it that when two Jattis wearing the Vajramushti wrestle and the moment the blood is drawn on the head of one of the wrestlers, it signals the start of Dasara Procession, later on that day.

The Vajramushti Kalaga will be held between 9 am and 9.30 am at the Kannadi Thotti in the Mysore Palace premises when two pairs of wrestlers join in the bout.

All arrangements have been made for the Vajramushti Kalaga. This year Mysuru’s Manjunath Jetty and Channapatna’s Vidyadara Jetty and Bengaluru’s Raghavendra Jetty and Chamarajanagar’s Purshotham Jetty will wrestle one another.

Yesterday afternoon, the elder Ustads set the stage for the kalaga by pairing the wrestlers at the Gayathridevi Temple premises in Mysore Palace.

It is a unique feature that Vajramushti Kalaga always happens between wrestlers of four districts. The Jatti community is confined to the four districts of Mysuru, Chamarajanagar, Bengaluru and Channapatna.

There are Jattis living in Gujarat.The Jatti community hails from Delmal near Ahmedabad. There is Nimbujamba temple there too. They also have a Garadi there. “For various reasons, our ancestors migrated from there to Karnataka, Tamil Nadu and Andhra Pradesh. Our elders grew up under the patronage of the Mysore royals. Since then this Vajramushti Kalaga is being held,” said  Dashamandi Srinivas Jatti.

“Only after a drop of blood is drawn in this Kalaga will the Jamboo Savari (elephant procession) begin. We hold this fight in order to invoke the blessings for the welfare of the royal family,” he added.

The Jattis who participate in the Kalaga have to follow a strict regime. They wear the Mushti (diamond-studded knuckles) in the hand and try to hit the head with it. At least a drop of blood has to come from the head of one of the Jattis. At times it takes just one or two minutes for the blood to ooze out and sometimes it may even take five minutes.