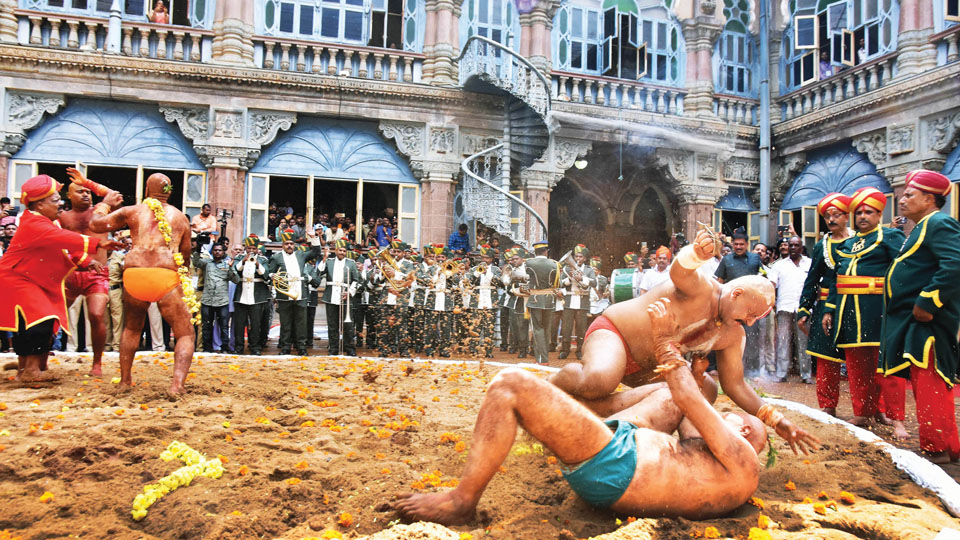 Mysore/Mysuru: The COVID-19 pandemic, which has forced the Government to celebrate Dasara in a simple manner this year, has also ‘gulped’ several other Dasara-related events such as wrestling competitions and other contests, including the famous ‘Vajramushti Kalaga,’ where wrestlers fight a bloody duel for peace and global welfare.

The ‘Vajramushti Kalaga’ is a test of physical strength and will last until either of the two contestants succeeds in drawing blood of his opponent.

With COVID-19 contagion showing no signs of abatement both in the State and Mysuru district, the Government decided to keep Dasara a low-key affair with the world famous ‘Jamboo Savari’ restricted to Palace premises this time. The ‘Vajramushti Kalaga’ like the ‘Khas Durbar’ (Private Durbar) has its own significance and speciality.

As the Government has planned only a simple Dasara, sans most of the events, member of the erstwhile Royal family Pramoda Devi Wadiyar had convened a meeting of Jatti community leaders a few  days ago, during which she is said to have told that holding of  ‘Vajramushti Kalaga’ was not advisable when the Coronavirus is on a rampage.

While some members were unwelcoming of Pramoda Devi’s advice, some others suggested that the event be held with all precautionary and safety measures in place. But strongly opposing the idea of holding the event, Pramoda Devi said that the event must not take place this year as it poses a serious health risk in the wake of Coronavirus spread. Later, the Jatti community members paying heed to her advise, backtracked from holding the event.

Centuries later, Nalwadi Krishnaraja Wadiyar, who was an ardent fan of wrestling, showed interest in learning this special art. What began as just learning, later became a major Dasara event with the passage of time, which helped in developing a special bond between the erstwhile Mysore Maharajas and Jatti Kalaga.

An enthusiastic Krishnaraja Wadiyar provided shelter to some of the Jattis in the Palace itself and learnt the art from them. As days passed by, these Jattis became servants of Mysore Rulers.

The Jattis believe that ‘Vajramushti Kalaga’ has divine blessings. The Jattis, who are firm believers of God and divinity, will observe ‘Vrata’ throughout the ten-day Dasara Festival by performing pujas and rituals. Every year, only four Jattis, with their heads tonsured, will be allowed to take part in the ‘Vajramushti Kalaga,’ which is a bloody dual involving sharp weapons. The ‘Kalaga’ will go on until the first blood is drawn. The Jattis firmly believe that the fight, organised in memory of late Mysore Maharajas, has the blessings of Goddess Chamundeshwari and many other deities.

The ‘Vajramushti Kalaga’ is restricted only to Jatti community members and every year, the Jattis taking part will be identified ahead of Dasara. The selected ones will undergo a 15-day rigorous training, during which they will be taught several tricks of the art, including exercising the body in mud.

The Jattis believe that blood dropping into the mud will bring peace and prosperity to mankind. It has become customary for the Maharaja to enter inside the wrestling arena once the first blood is drawn and give gifts to the Jattis involved in the fight.

The Jatti community, which holds the exclusive right for organising ‘Vajramushti Kalaga,’ is limited to just about four districts of Mysuru region. Usually, the fight takes place at ‘Karikallu Thotti’ inside the Palace premises.

C.N. Balaji Jatti, a ‘Vajramushti’ wrestler, said that this is for the first time in many years that there will be no ‘Vajramushti Kalaga’ in the Palace premises.

Pointing out that the Jatti  community is very much loyal to the Royal family for generations, he said there is no example of the bout having got suspended in recent decades.

Noting that in the wake of COVID-19 pandemic, Pramoda Devi Wadiyar has asked us not to organise ‘Vajramushti Kalaga’ this year, Balaji said that they will honour the Royal family and stay away from staging the event. However, four Jattis, believing that they may get the invite at the last minute, are getting prepared by observing several ‘Vratas’ and rituals, he pointed out.