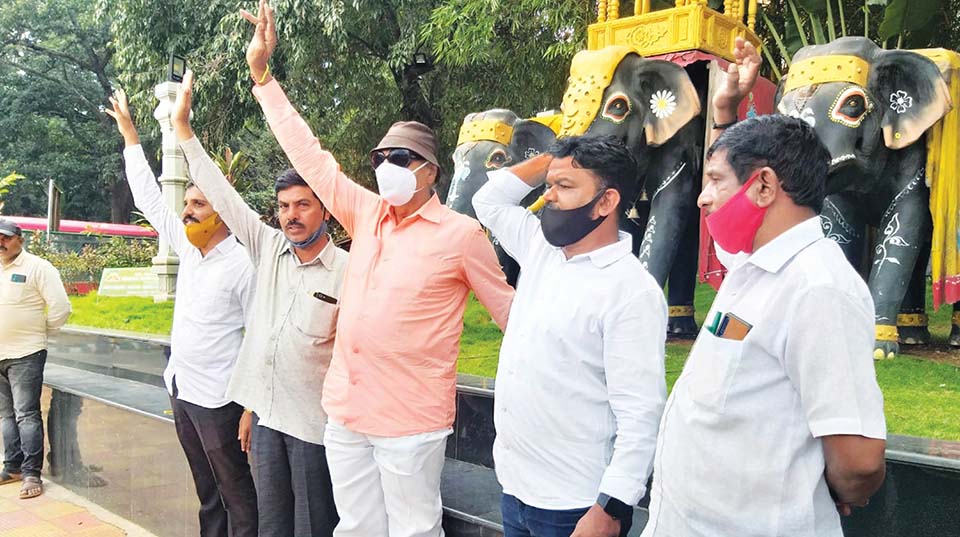 Mysuru: Accusing the Centre of imposing Hindi in Karnataka, Kannada Chaluvali leader Vatal Nagaraj said that his party (Kannada Chaluvali Vatal Paksha) will storm into Banks and other Central Government organisations from Nov. 21 if the Centre does not stop its Hindi promotion actions.

Charging the BJP and RSS of hatching a plot for imposition of Hindi throughout the country, Vatal said that an Action Committee will be formed in every district to fight the Centre’s plans for Hindi imposition.

Strongly condemning the Centre’s plans for Hindi imposition in Banks and other Central organisations and Institutions, Vatal alleged that though Banks needed the money of Kannadigas, they prefer to ignore Kannada usage in their functioning. Questioning the attitude of Banks towards Kannada, the Kannada Chaluvali leader urged Banks to make usage of Kannada mandatory.

He also lashed out at the MPs of Karnataka to raise their voice against the step-motherly treatment meted out to Kannadigas.

Vatal also announced that he would contest for the Legislative Council seat from Mysuru-Chamarajanagar Local Bodies, the poll for which is due next year.

Lambasting the Government for paying meagre wages for Gram Panchayat members and heads, he demanded payment of minimum wages of Rs. 5,000 for GP members, Rs. 10,000 for Presidents and Rs. 7,500 for Vice-Presidents. He also warned of staging demonstrations in front of Tahsildar offices in all taluks of Mysuru and Chamarajanagar districts if the Government does not hike wages.