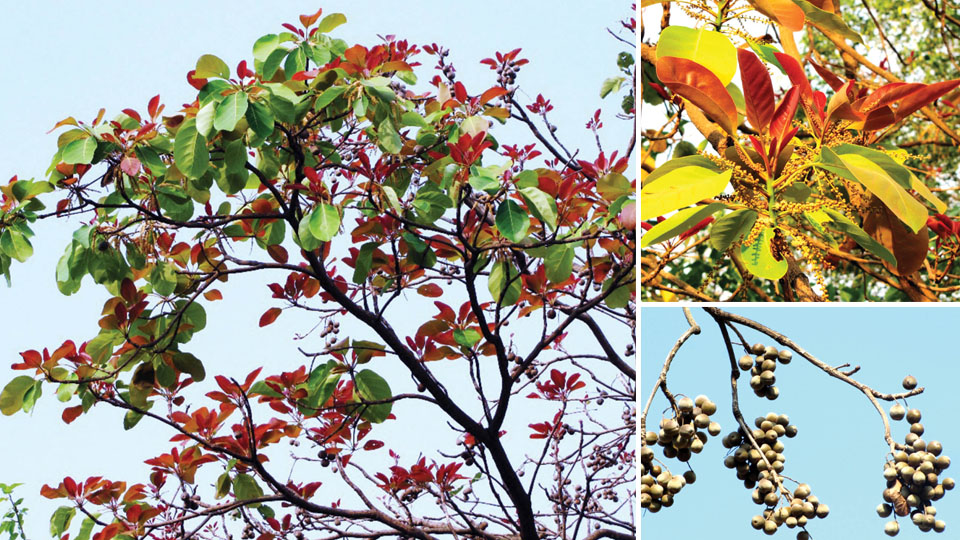 use in folklore and traditional medicines from the days of yore and form part of Indian medicinal systems.  In reference  ‘Vibhitakah’  known as ‘Thare mara’ in Kannada is one of the sought after medicinal trees. Named after “Vibheetaki,” its fruit, it is supposed to take away the fear of disease.

‘Vibhitakah’  is believed to be the abode of  “Lord Shani” and planted in the premises of Shaneeshwara temples all over South India. The tree  has ornamental value too and used in urban plantations. Interestingly, it is one of the common trees in Mysuru and dots many parks and avenues. It is called Belliric myrobalan, Bastard myrobalan, Beach almond, Bedda nut tree in English; Hindi: Bahera, Baheda,  Bhutvaas; Kannada: taarekaayi, shanthikayi; Malayalam: Thani, Thaani, Thanri; Tamil: Thani, Todikai; Telugu: Tanikaya, Taadi,  Tandrachettu; Sanskrit:  Akshah,  Bahuvirya, Bibhitaka, Karshah,  Karshphal. Its scientific name is Terminalia bellirica  belonging to the family Combretaceae and  a close associate of myrobalan (Alalekayi). It is a native tree found all over India (except Jammu & Kashmir, Himachal Pradesh, Sikkim, Arunachal Pradesh)  in  semi-evergreen and moist deciduous forests as well as plains. It is common throughout Karnataka, Kerala and Tamil Nadu. 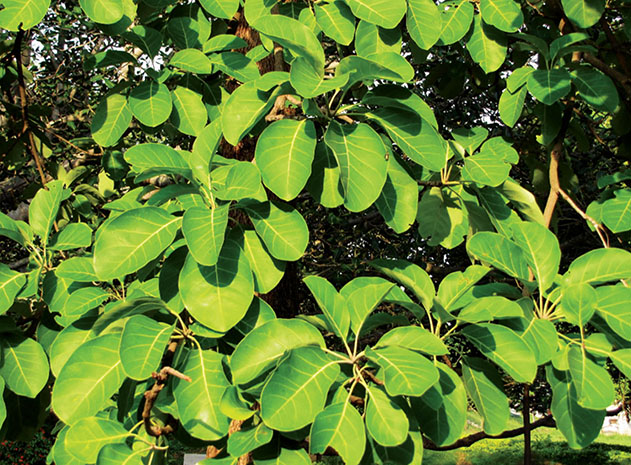 My association with this tree dates back to 80s when I surveyed Bastar region for “tanniferous plants” used for leather making,  with the support of Bihar Forest Department,  when I was with Botany lab of CSIR-CLRI, Chennai. It was a frightening experience as the survey crisscrossed the Naxal areas! It is spine chilling if I recall now!

Terminalia bellerica is a forest tree brought to urban plantations.  It is a tall handsome tree with a characteristic brownish grey bark with shallow longitudinal fissures and peelings, attaining a height of 50 – 60 ft. in elevations up to  3,500 ft.  The trunk is cylindrical with horizontally spreading branches and terete branchlets (cylindrical without ridges).   Leaves simple, opposite or alternate, often clustered at the tip of branchlets and the  arrangement is  technically called  ‘fascicle.’  They are 4 – 8” long, 3 – 6” wide with prominent scars on a stout leaf stalk, slightly grooved above. The shape is elliptic or elliptic obovate with pointed or rounded tips,  entire &  leathery to touch with characteristic vasculature with 7-10 pairs of  prominent lateral nerves. Inflorescence in leaf axils is botanically known as ‘spikes’  ( flowers attached to the axis without stalks) with greenish yellow blossoms. Flowers at the upper end are male while lower ones are bisexual. Ovary 1-celled; stamens 3-4 mm long. Fruit is obovoid 1-celled, covered with minute hairs, stone (seed) very thick, often indistinctly 5 angled. Two varieties of T. bellerica are found in India, one with nearly globular fruit, small in size; another with ovate and much larger fruit. 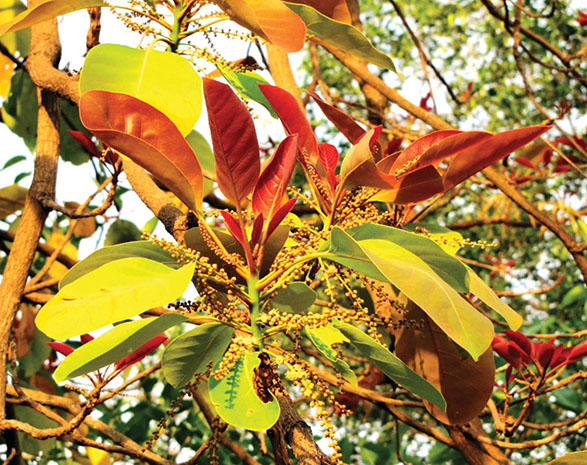 The tree is considered sacred and is never cut down because of the belief that the deity Shaneeshwara resides in it. Hindus of Northern India avoid sitting under its shade believing that the tree is inhabited by demons. According to epic poem Mahabharata and  Rigveda book 10 hymn 34a (Wikipedia)  a handful of nuts with five flatter sides were used as casting on a gaming board and the players had to call odd or even number of nuts thrown.  King Rituparna who features in the story of Nala had the ability to count  the nuts on an entire bough of Vibhitakah tree. 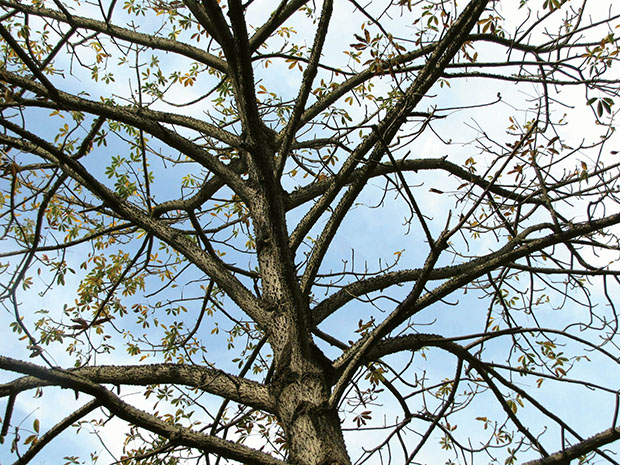 The tree is a power house of herbal medicines with innumerable curative and therapeutic properties and bears the  Sanskrit  tag “Anila-ghnaka” (wind-killing).  The plant parts are rich in alkaloids, triterpenoids, coumarins, flavones, polyphenols, tannins, glycosides, saponins, belleric acid, β-sitosterol etc. Infusions are bitter, acrid, astringent, laxative, antibacterial and antipyretic. In Ayurvedic parlance it has Rasa (Taste): Astringent,  Virya (Potency): Warm, Vipaka (Post Digestive Effect): Sweet with unique property of balancing  Tridosha.  Nonetheless, fruit ‘Bibhitaki’ is the main ingredient for drug formulations especially  ‘Triphala’ the wonder drug (rasayana) in ayurvedic medicine. In reality, it is a  herbal formulation of  three fruits (amla, belleric and chebulic myrobalan)  rich in antioxidant, used for treating many health disorders.  The fruit also finds use in treating cough,  throat and chest infections, dysenteric-diarrhoea, dropsy, skin allergies etc.  In folklore, the paste of the bark is used to cure paralysis. The kernel is chewed with betel nut as substitute for arecanut ; also used by some tribes for its mind-altering qualities.  Fruits are used in tanning. 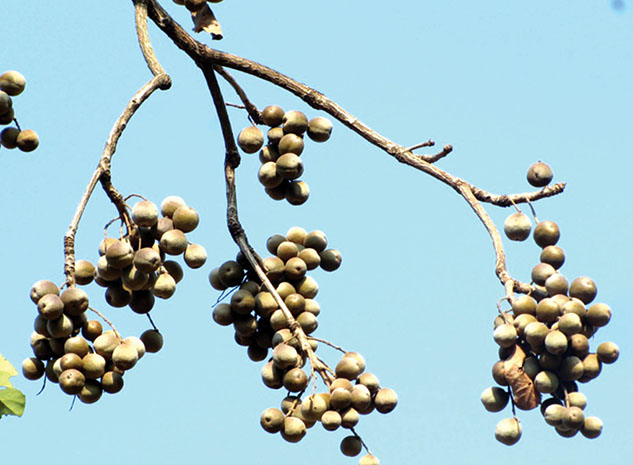 The saplings can easily be raised by sowing seeds. Germination begins after  2 weeks.  De-pulping and soaking in cold water for 48 hours ensures maximum germination and overcomes slow germination.  Transplant 1-year-old  seedlings to pits.

Shani temples, lake areas of Lingambudhi, Kukkarahalli and many parks.