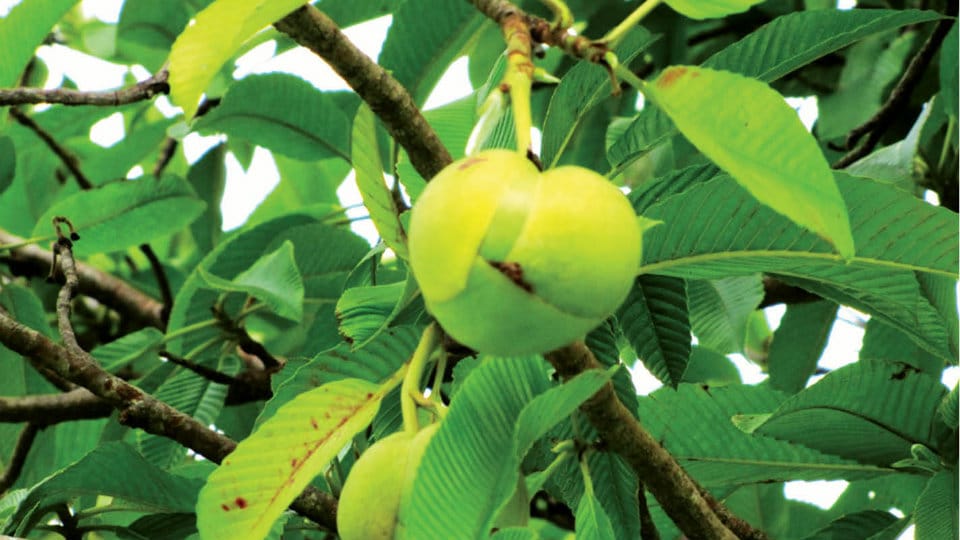 With decorative foliage and  fragrant blooms,  ‘Elephant Apple’ tree is highly valued for its medicinal properties. The apple-like yellow-green edible fruits of this tree are relished by elephants. Hence the name.

The tree is native to forest river banks across tropical Asia to South-East Asia. Being an important source of food for elephants and other animals like monkeys, deer in North-Eastern India, the tree plays a major role in forest ecology. It is an introduced tree  to gardens and elsewhere  from the forests of North-Eastern India. 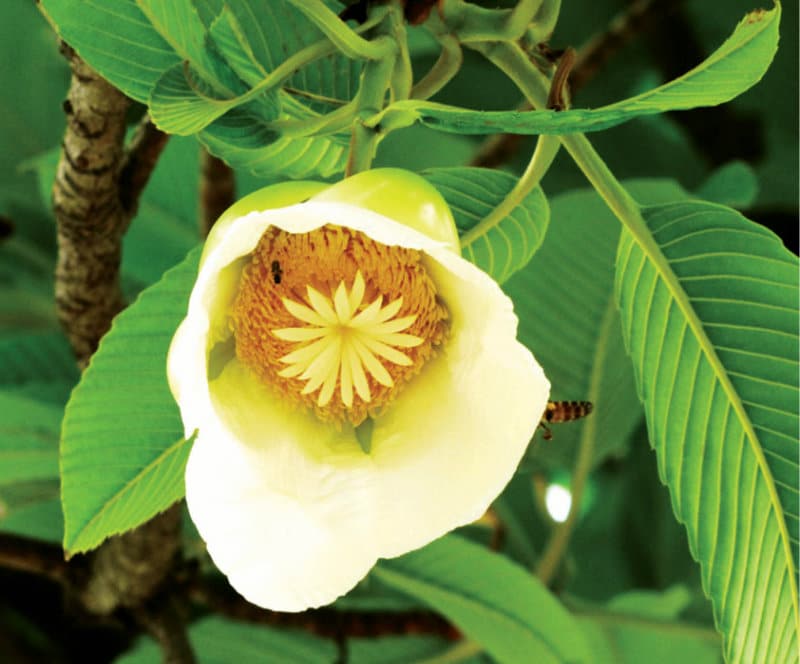 ‘Elephant Apple’ is an evergreen or semi-evergreen, medium-sized tree with a spreading canopy. The leaves are large, attractive with a ribbed surface and impressed veins. They are glossy, silky, dark green with teeth-like margins and slightly lemon-scented when crushed.  Flowers are large and solitary at the ends of the twigs. Sepals are rounded and yellowish green; petals, 5, white; stamens numerous, yellow. The flowers face downward and are short-lived. The fruits are yellow-green with a leathery brown covering and brown-black seeds. The flowering season is June to August.

A power house of herbal medicines, the tree is a divine gift to human beings and widely used in Ayurveda and Siddha. Its medicinal uses find place in Vedas and Puranas (Yajurveda, Upavarhana Samhita, Charaka Samhita, Rajanighantu, Matsya  Purana,  Agni Purana). It is one of the widely used folk medicinal plant by various tribes of entire North-East. The leaves, bark, fruits and other parts possess wide range of activity (antimicrobial, antioxidant, analgesic, anti-inflammatory, dysentery, antidiabetic etc.). The fruit pulp is used as tonic and laxative, treatment of abdominal disorders, mixed with sugar against coughs. The bark and leaves are used as laxative and astringent; bark as a mouthwash to treat thrush. The plant parts are also used for treatment of diabetes and cancer. 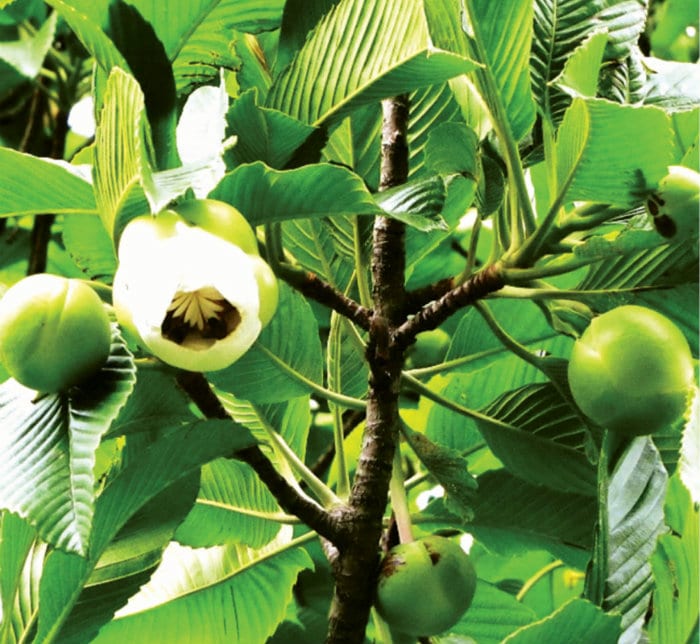 Fruits can be eaten raw or cooked. The bulk of the fruit actually consists of thick sepals, which have a sour taste and used in dal and fish preparations and often mixed with coconut and spices to make chutneys in N-E.  The unripe fruits are also pickled. The aromatic (almost onion-like), acid, juicy fruit pulp (jelly like) is bitter-sour and used in curries, jam (ouu khatta), jellies, drinks or fermented into vinegar.

The fruit pulp is used for hair wash. The leaf juice is applied to the scalp to treat dandruff and falling hairs to prevent baldness. The dried leaves are used to polish ivory. The wood ash is added to clay bricks to increase fire resistance. 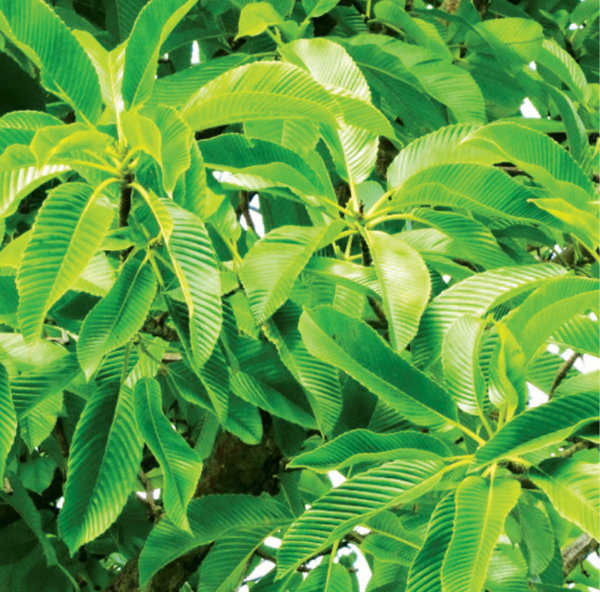 Plant them in a corner of the lawn in big gardens.

It can also be used as a large container plant.

The tree can be easily propagated by seeds / semi-ripe cuttings.

There were two trees on the lawns of Kalamandira in front of the main auditorium.  They dried up under mysterious circumstances. The skeleton of one tree remains while the other has been razed to the ground. Nevertheless, it can be seen in Lalbagh, Bengaluru. 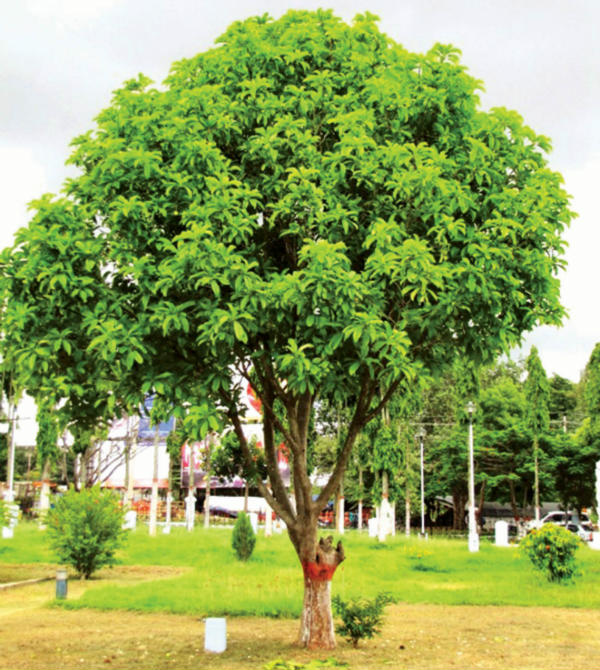 * P.S.: This is a very very rare tree in Mysuru. I spotted them in Kalamandira premises and photographed. I noticed the leaves  started drying and falling from both the trees during December 2016 and the trees dried up by January, 2017 end. Within my limited survey I have not spotted this species elsewhere in Mysuru city. I think we lost them for ever.